Demodex is a genus of tiny parasitic mites that live in or near hair follicles of mammals. About 65 species of Demodex are known; they are among the smallest of arthropods. Two species living on humans have been identified: Demodex folliculorum and Demodex brevis, both frequently referred to as eyelash mites. Demodex canis lives on the domestic dog. Infestation with Demodex is common and usually does not cause any symptoms, although occasionally some skin diseases can be caused by the mites.

Demodex folliculorum and Demodex brevis are typically found on humans. D. folliculorum was first described in 1842 by Simon; D. brevis was identified as separate in 1963 by Akbulatova. D. folliculorum is found in hair follicles, while D. brevis lives in sebaceous glands connected to hair follicles. Both species are primarily found in the face, near the nose, the eyelashes and eyebrows, but also occur elsewhere on the body.

The adult mites are only 0.3–0.4 millimetre (0.012–0.016 in) long, with D. brevis slightly shorter than D. folliculorum.[1] They have a semi-transparent elongated body that consists of two fused segments. Eight short segmented legs are attached to the first body segment. The body is covered with scales for anchoring itself in the hair follicle, and the mite has pin-like mouth-parts for eating skin cells, hormones and oils (sebum) which accumulate in the hair follicles. The mites can leave the hair follicles and slowly walk around on the skin, at a speed of 8–16 centimetres (3.1–6.3 in) per hour—especially at night as they try to avoid light.[1]

Female Demodex folliculorum are somewhat shorter and rounder than males. Both male and female Demodex mites have a genital opening, and fertilization is internal.[2] Mating takes place in the follicle opening, and eggs are laid inside the hair follicles or sebaceous glands. The six-legged larvae hatch after 3–4 days, and it takes about seven days for the larvae to develop into adults. The total lifespan of a Demodex mite is several weeks. The dead mites decompose inside the hair follicles or sebaceous glands.

Older people are much more likely to carry the mites; it is estimated that about a third of children and young adults, half of adults, and two-thirds of elderly people carry the mites.[3] The lower rate of children may be because children produce much less sebum. It is quite easy to look for one's own Demodex mites, by carefully removing an eyelash or eyebrow hair and placing it under a microscope.

In the vast majority of cases, the mites go unobserved, without any adverse symptoms, but in certain cases (usually related to a suppressed immune system, caused by stress or illness) mite populations can dramatically increase, resulting in a condition known as demodicosis or Demodex mite bite, characterised by itching, inflammation and other skin disorders. Blepharitis (inflammation of the eyelids) can also be caused by Demodex mites.

There is some evidence linking Demodex mites to some forms of the skin disease rosacea, possibly due to the bacterium Bacillus oleronius found in the mites.[4] 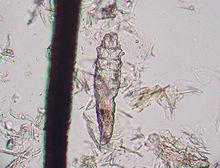 The species Demodex canis lives predominantly on the domestic dog, but can occasionally infect humans. Although the majority of infestations are commensal, and therefore sub-clinical, it can develop into a condition called demodectic mange.

Due to their habitat being deep in the dermis, transmission is only usually possible via prolonged direct contact, such as bitch-to-pup transmission during suckling. As a result, the most common sites for early appearance of demodicodic lesions are the face, muzzle, forelimbs and periorbital regions. Demodicosis can manifest as lesions of two types: squamous—which causes dry alopecia and thickening of the skin; and pustular—which is the more severe form, causing secondary infection (usually by Staphylococcus) resulting in the characteristic red, numerous pustules and wrinkling of the skin.

The escalation of a commensal D. canis infestation into one requiring clinical attention usually involves complex immune factors. Demodicosis can follow immunosuppressive conditions or treatments, or may be related to a genetic immune deficiency. This is complicated by the fact that Demodex itself is thought to suppress the normal T-lymphocyte response. There are also certain breeds, such as the Dalmatian, which appear to be more susceptible.[5]