/ˈmeɪnʒ/) is the common name for a class of persistent contagious skin diseases caused by parasitic mites.[1] Since mites also infect plants, birds, and reptiles, the term "mange," suggesting poor condition of the hairy coat due to the infection, is sometimes reserved only for pathological mite-infestation of non-human mammals. Thus, mange is a term used to describe mite-associated skin disease in domestic animals (cats and dogs), in livestock (such as sheep scab), and in wild animals (for example, coyotes, cougars, and bears).[2][3] Since mites belong to the arachnid subclass Acari (also called Acarina), another term used to describe mite infestation is acariasis.

Mammalian parasitic mites that cause mange embed themselves either in skin or hair follicles, depending upon their genus. Sarcoptes spp. burrow into skin, while Demodex spp. live in follicles.

In humans, these two types of mite infections, which would otherwise be known as "mange" in furry mammals, are instead known (respectively) as scabies and demodicosis. However, the mites that cause these diseases in humans are closely related to those that cause the mange in other mammals.

Two types of pet-associated mites afflict dogs and cats with a type of hair-losing dermatitis, and each type has characteristic symptoms. 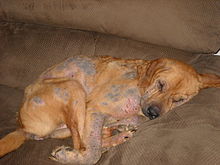 A dog with severe demodectic mange

Also called demodicosis or Red Mange, demodectic mange is caused by a sensitivity to and overpopulation of Demodex canis if the animal's immune system is unable to keep the mites under control. There are two types of demodectic mange: localized and generalized. Localized consists of 4 spots or less. Most dogs are immune to demodectic mange, however dogs with compromised immune systems and the elderly are at a higher risk. It is not contagious to humans.

A type of demodetic infection in humans in known, but is less commonly symptomatic. See Demodex folliculorum. 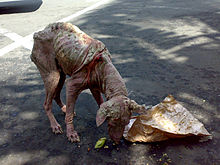 A street dog in Bali, Indonesia, suffers from sarcoptic mange

All these burrowing mites are in the family Sarcoptidae. They dig into and through the skin, causing intense itching from an allergic reaction to the mite, and crusting that can quickly become infected. Hair loss and crusting frequently appear first on elbows and ears. Skin damage can occur from the dog's intense scratching and biting. Secondary skin infection is also common. Dogs with chronic sarcoptic mange are often in poor condition, and in both animals and humans immune suppression from starvation or any other disease causes this type of mange to develop into a highly crusted form in which the burde of mites is far higher than in healthy specimens.

In cases of sarcoptic mange, affected dogs need to be isolated from other dogs and their bedding, and places they have occupied must be thoroughly cleaned. Other dogs in contact with a diagnosed case should be evaluated and treated.

There are a number of parasitical treatments useful in treating canine scabies. Sulfurated lime rinses applied weekly or bi-weekly are effective (warning: the concentrated form for use on plants as a fungicide must be diluted 1:16 or 1:32 for use on animal skin). Selamectin is licensed for treatment by veterinary prescription in several countries; it is applied as a drip-on directly to the skin. Ivermectin is effective and can be given by mouth for two to four weekly treatments; this drug is not safe to use on some collie-like herding dogs, however, due to possible homozygous MDR1 (P-glycoprotein) mutations that increase its toxicity. Ivermectin injections are also effective and given in either weekly or every two weeks in one to four doses. Topical 0.01% ivermectin (Acarexx) has been reported to be effective in humans and many types of animals (especially in ear mite infections where the animal cannot lick the treated area), and is so poorly absorbed that systemic toxicity is less likely in these sites. Nevertheless, topical ivermectin has not been well enough tested to be approved for this use in dogs, and is theoretically much more dangerous in zones where the animal can potentially lick the treated area.

Veterinarians usually attempt diagnosis with skin scrapings from multiple areas, which are then examined under a microscope for mites. Sarcoptes, because they may be present in relatively low numbers, and because they are often removed by dogs chewing at themselves, may be difficult to demonstrate. As a result, diagnosis in Sarcoptic mange is often based on symptoms rather than actual confirmation of the presence of mites. A common and simple way of determining if a dog has mange is if it displays what is called a "Pedal-Pinna reflex", which is when the dog moves one of its hind legs in a scratching motion as the ear is being manipulated and scratched gently by the examiner; because the mites proliferate on the ear margins in nearly all cases at some point, this method works over 95% of the time.[4] It is helpful in cases where all symptoms of mange are present but no mites are observed with a microscope. In some countries, a serologic test is available that may be useful in diagnosis.