There are many conditions of or affecting the human integumentary system—the organ system that comprises the entire surface of the body and includes skin, hair, nails, and related muscle and glands.[1]

Diseases of the skin include skin infections and skin neoplasms (including skin cancer).

In 1572, Geronimo Mercuriali of Forlì, Italy, completed De morbis cutaneis (translated "On the diseases of the skin"). It is considered the first scientific work dedicated to dermatology.

In World War I, over two million days of service are estimated to have been lost by reason of skin diseases alone.[2]

The physical examination of the skin and its appendages, as well as the mucous membranes, forms the cornerstone of an accurate diagnosis of cutaneous conditions.[3] Most of these conditions present with cutaneous surface changes term "lesions," which have more or less distinct characteristics.[4] Often proper examination will lead the physician to obtain appropriate historical information and/or laboratory tests that are able to confirm the diagnosis.[3] Upon examination, the important clinical observations are the (1) morphology, (2) configuration, and (3) distribution of the lesion(s).[3] With regard to morphology, the initial lesion that characterizes a condition is known as the "primary lesion," and identification of such a lesions is the most important aspect of the cutaneous examination.[4] Over time, these primary lesions may continue to develop or be modified by regression or trauma, producing "secondary lesions."[1] However, with that being stated, the lack of standardization of basic dermatologic terminology has been one of the principal barriers to successful communication among physicians in describing cutaneous findings.[5] Nevertheless, there are some commonly accepted terms used to describe the macroscopic morphology, configuration, and distribution of skin lesions, which are listed below.[4] 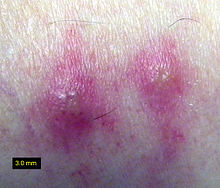 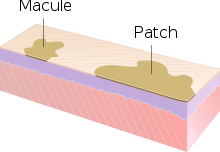 "Configuration" refers to how lesions are locally grouped ("organized"), which contrasts with how they are distributed (see next section).

"Distribution" refers to how lesions are localized. They may be confined to a single area (a patch) or may exist in several places. Several distributions correlate an anatomical reference. Some correlate with the means by which a given area becomes effected. For example, contact dermatitis correlates with locations where allergen has elicited an allergic immune response. Varicella Zoster Virus is known to recur (after its initial presentation as Chicken Pox) as Shingles. Chicken Pox appears nearly everywhere on the body but Shingles tends to follow one or two dermatomes. (For example, the eruptions may appear along the bra line, on either or both sides of the patient.)

Combined (conjoint) terms (maculopapular, papuloerosive, papulopustular, papulovesicular, papulosquamous, tuberoulcerative, vesiculobullous, vesiculopustular) are used to describe eruptions that evolve from one type of lesion to the next so often appear as having traits of both, when transitioning[citation needed].