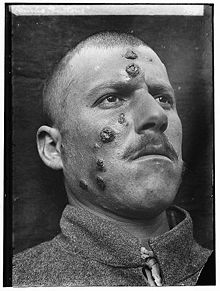 A 1917 case of Cutaneous Leishmaniasis in the Middle East, known then locally as "Jericho Buttons" for the frequency of cases near the ancient city of Jericho. 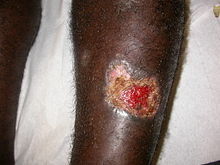 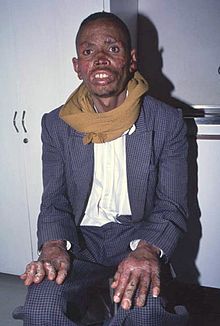 Post kala-azar dermal leishmaniasis (PKDL) is a recurrence of Kala-azar that may appear on the skin of affected individuals up to 20 years after being partially treated, untreated or even in those considered adequately treated.[2][3] In Sudan they can be demonstrated in up to 60% of treated cases. They manifest as hypo-pigmented macules, papules, nodules, or facial erythema. Though any organism causing Kala-azar can lead to PKDL, it is commonly associated with L. donovani which gives different disease patterns in India and Sudan. In the Indian variant, nodules enlarge with time and form plaques but rarely ulcerate, but nodules from the African variety often ulcerate as they progress. Nerve involvement is common in African variety but rare in Indian subcontinent.[4] Histology demonstrates a mixture of chronic inflammatory cells; there can be macrophage or epitheloid granuloma.[5] Parasite concentration is not consistent among studies, perhaps reflecting low sensitivity of diagnostic methods used in earlier entries.

Current approach to diagnosis involves 1. demonstration of parasite by microscopy, in vitro culture or animal inoculation; 2. immuno-diagnosis of parasite antigen; 3. detection of parasite DNA in tissue. Newer PCR based tools have higher sensitivity and specificity. Emergence of PKLD has been reported in HIV affected individuals [6] and may become a problem in future.

Sodium stibogluconate (SSG) alone or in combination with rifampicin is used for the treatment of PKLD for a long course of up to 4 months. Compliance can be an issue for such a long course.

Mucocutaneous leishmaniasis is treated with long courses (e.g. 30 days) of pentavalent antimonials in a high dose (20 mg/kg). This may fail to cure up to 42% of patients.[7] Even in those patients who achieve an apparent cure, as many as 19% will relapse.[8] Several drug combinations with immunomodulators have been tested, for example, a combination of pentoxifylline (inhibitor of TNF-α) and a pentavalent antimonial at a high-dose for 30 days in a small-scale (23 patients) randomised placebo-controlled study from Brazil achieved cure rates of 90% and reduced time to cure,[9] a result that should be interpreted cautiously in light of inherent limitations of small-scale studies.[10] In an earlier small-scale (12 patients) study, addition of imiquimod showed promising results[11] which need yet to be confirmed in larger trials.

Promastigotes of leishmania are transmitted to human skin by the bite of a sandfly. Leishmania then invades human macrophages and replicates intracellularly.

A raised, red lesion develops at the site of the bite (often weeks or sometimes years afterwards). The lesion then ulcerates and may become secondarily infected with bacteria. In many species (for example, L. major) the lesion often spontaneously heals with atrophic scarring. In some species (for example, L. viannia braziliensis) the lesion may spontaneously heal with scarring, but then re-appear elsewhere (especially as destructive mucocutaneous lesions). Lesions of other leishmania species may spontaneously heal and then re-appear as satellite lesions around the site of the original lesion, or along the route of lymphatic drainage.

Diagnosis is based on the characteristic appearance of non-healing raised, scaling lesions that may ulcerate and become secondarily infected with organisms such as Staphylococcus aureus, in someone who has returned from an endemic area. The gold standard for diagnosis is PCR.[12]

The evidence for optimal treatment of cutaneous leishmaniasis is patchy. Treatments that work for one species of leishmania may not work for another; it is recommended that advice of a tropical medicine or geographical medicine specialist be sought. Ideally, every effort should be made to establish the species of leishmania by molecular techniques (PCR) prior to starting treatment. In the setting of a developing country, there is often only one species present in a particular locality, so it is usually unnecessary to speciate every infection. Unfortunately, leishmaniasis is an orphan disease, and almost all the current treatment options are toxic with significant side-effects.

Leishmania major
L. major infections are usually considered to heal spontaneously and do not require treatment, but there have been several reports of severe cases caused by L. major in Afghanistan. In Saudi Arabia, a six-week course of oral fluconazole 200 mg daily has been reported to speed up healing.[13]
Leishmania (Viannia) braziliensis
Treatment with pentavalent antimonials or amphotericin is mandatory, because of the risk of developing disfiguring mucocutaneous lesions.

New treatment options are arising from the new oral drug Miltefosine (Impavido) which has shown in several clinical trials to be very efficient and safe in visceral and cutaneous leishmaniasis. Recent studies from Bolivia show a high cure rate for mucocutaneous leishmaniasis. Comparative studies against pentavalent antimonials in Iran and Pakistan are also beginning to show a high cure rate for L.major and L.tropica. It is registered in many countries of Latin America (e.g., Colombia), as well in Germany, the home country of its developer Zentaris GmbH. In October 2006 it received orphan drug status from the US Food and Drug administration. The drug is generally better tolerated than other drugs. Main side effects are gastrointestinal disturbances in the 1–2 days of treatment which does not affect the efficacy.

Cutaneous leishmaniasis has been occurring in troops coming back from Afghanistan.[16]