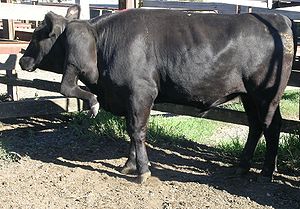 A grown steer with five legs.

A congenital anomaly (congenital abnormality, congenital malformation, birth defect) is a condition which is present at the time of birth which varies from the standard presentation.[1]

It is a type of congenital disorder which is primarily structural in nature.[2]

A limb anomaly is called a dysmelia. These include all forms of limbs anomalies, such as amelia, ectrodactyly, phocomelia, polymelia, polydactyly, syndactyly, polysyndactyly, oligodactyly, brachydactyly, achondroplasia, congenital aplasia or hypoplasia, amniotic band syndrome, and cleidocranial dysostosis.

Congenital anomalies of the gastrointestinal system include numerous forms of stenosis and atresia, and imperforate.

The cause of 40-60% of congenital anomalies in humans is unknown. These are referred to as sporadic, a term that implies an unknown cause, random occurrence regardless of maternal living conditions,[4] and a low recurrence risk for future children. For 20-25% of anomalies there seems to be a "multifactorial" cause, meaning a complex interaction of multiple minor genetic anomalies with environmental risk factors. Another 10-13% of anomalies have a purely environmental cause (e.g. infections, illness, or drug abuse in the mother). Only 12-25% of anomalies have a purely genetic cause. Of these, the majority are chromosomal anomalies.[5]

Genetic causes of congenital anomalies include inheritance of abnormal genes from the parents, as well as new mutations in one of the germ cells that gave rise to the fetus.

Environmental causes of congenital anomalies are referred to as teratogenic. These are generally problems with the mother's environment. Teratogens can include dietary deficiencies, toxins, or infections. For example, dietary deficiency of maternal folic acid is associated with spina bifida. Ingestion of harmful substances by the mother (e.g., alcohol, mercury, or prescription drugs such as phenytoin) can cause recognizable combinations of birth defects.

Several infections which a mother can contract during pregnancy can also be teratogenic. These are referred to as the TORCH infections.

The greatest risk of a malformation due to environmental exposure to a teratogen (terato = monster, gen = producing) between the third and eighth week of gestation. Before this time, any damage to the embryo is likely to result in fatality, and the baby will not be born. After eight weeks, the fetus and its organs are more developed and less sensitive to teratogenic incidents.

Many common skin care ingredients can be absorbed through the skin in small amounts, where they can enter the bloodstream and pass into the fetus's circulation.[citation needed]