Although it is named for Rancho Santa Margarita y Las Flores, which was in San Diego County, the city limits fall within the borders of Rancho Mission Viejo.

Hughes Aircraft Company's Microelectronic Systems Division and Connecting Devices Division moved to Rancho Santa Margarita in May 1988 from Irvine. In August 1992 the Hughes plant closed its facilities and moved the division to Carlsbad, California due to budget constraints in the aerospace industry.

La Cañada Flintridge had the longest city name in California with 18 letters until January 1, 2000, when the title was ceded to Rancho Santa Margarita (20 letters) upon the latter's incorporation.

Rancho Santa Margarita is bordered by the city of Mission Viejo on the west, the census-designated Coto de Caza and Las Flores on the south, Trabuco Canyon on the north, and the Cleveland National Forest on the east. 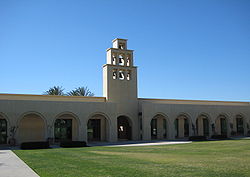 The Rancho Santa Margarita Landscape and Recreation Corporation, or SAMLARC, is often referred to as the master association in Rancho Santa Margarita because other smaller sub associations fall within its membership and it encompasses the original footprint of the master planned community of Rancho Santa Margarita. SAMLARC comprises roughly 13,000 units and maintains most streetscapes, medians, parks and trails within the community. In total, SAMLARC runs and maintains 13 parks, 4 pools, a lagoon, a lake, and numerous trails within the community. One of SAMLARC's most popular parks, Central Park located next to City Hall, contains a large amphitheater where a number of community events are held each year. Central Park is also home to an arena soccer rink that was converted from a roller hockey rink. SAMLARC also maintains a popular skate and dog park that are located within SAMLARC's Canada Vista Park.[4]

Dove Canyon is a private residential community located in eastern Rancho Santa Margarita. It is a small enclave of approximately 1,200 homes and 5,000 residents. Included within the guard-gated entry is a Jack Nicklaus signature golf club, pool, tennis courts, a small child's park, a wide field, a shopping center, and a reservoir. The majority of its residents are upper middle class residents of Orange County, and all of the homes in Dove Canyon are single-family residences. It is located in the Southeasternmost foothills of Orange County. Major roads include Dove Canyon/Bell Canyon and Sycamore Canyon. A horse trail starts at the waterfalls outside of the community and continues until the end of Sycamore Canyon. From there, hikers, horse riders, bikers, etc. can continue into Dove Canyon's neighbor community, Coto de Caza

Rancho Cielo is a smaller residential community located in eastern Rancho Santa Margarita. It includes gated entry with security guard. It is near the intersection of Plano Trabuco Road and Dove Canyon Drive. All of the homes are all single family residences and the majority of its residents are upper-middle class. Major Roads include Rancho Cielo and Camino Del Cielo.

According to the City's 2010 Comprehensive Annual Financial Report,[5] the top employers in the city are: 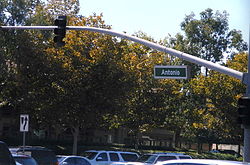 There were 16,253 households out of which 51.4% had children under the age of 18 living with them, 64.7% were married couples living together, 8.5% had a female householder with no husband present, and 23.6% were non-families. 17.7% of all households were made up of individuals and 2.4% had someone living alone who was 65 years of age or older. The average household size was 2.90 and the average family size was 3.35.

According to a 2007 estimate, the median income for a household in the city was $95,061, and the median income for a family was $110,799.[10] Males had a median income of $61,314 versus $40,799 for females. The per capita income for the city was $31,531. About 1.5% of families and 2.9% of the population were below the poverty line, including 3.1% of those under age 18 and 4.2% of those age 65 or over. Most of the neighborhoods in RSM are maintained by larger homeowner's associations including Melinda Heights, town center, Dove Canyon, Rancho Cielo, Robinson Ranch, and Trabuco Highlands. Dove Canyon, Trabuco Highlands, Robinson Ranch, and Rancho Cielo were all established before Rancho Santa Margarita was an incorporated community. East of Plano Tabuco Road is designated with a Trabuco Canyon (92679) zip code even though the area falls within the City of Rancho Santa Margarita boundary.[11]

The television series The Real Housewives of Orange County, although based in Coto De Caza, is mainly filmed in Rancho Santa Margarita where many of the housewives do business, shopping, commuting, and dining.[13]