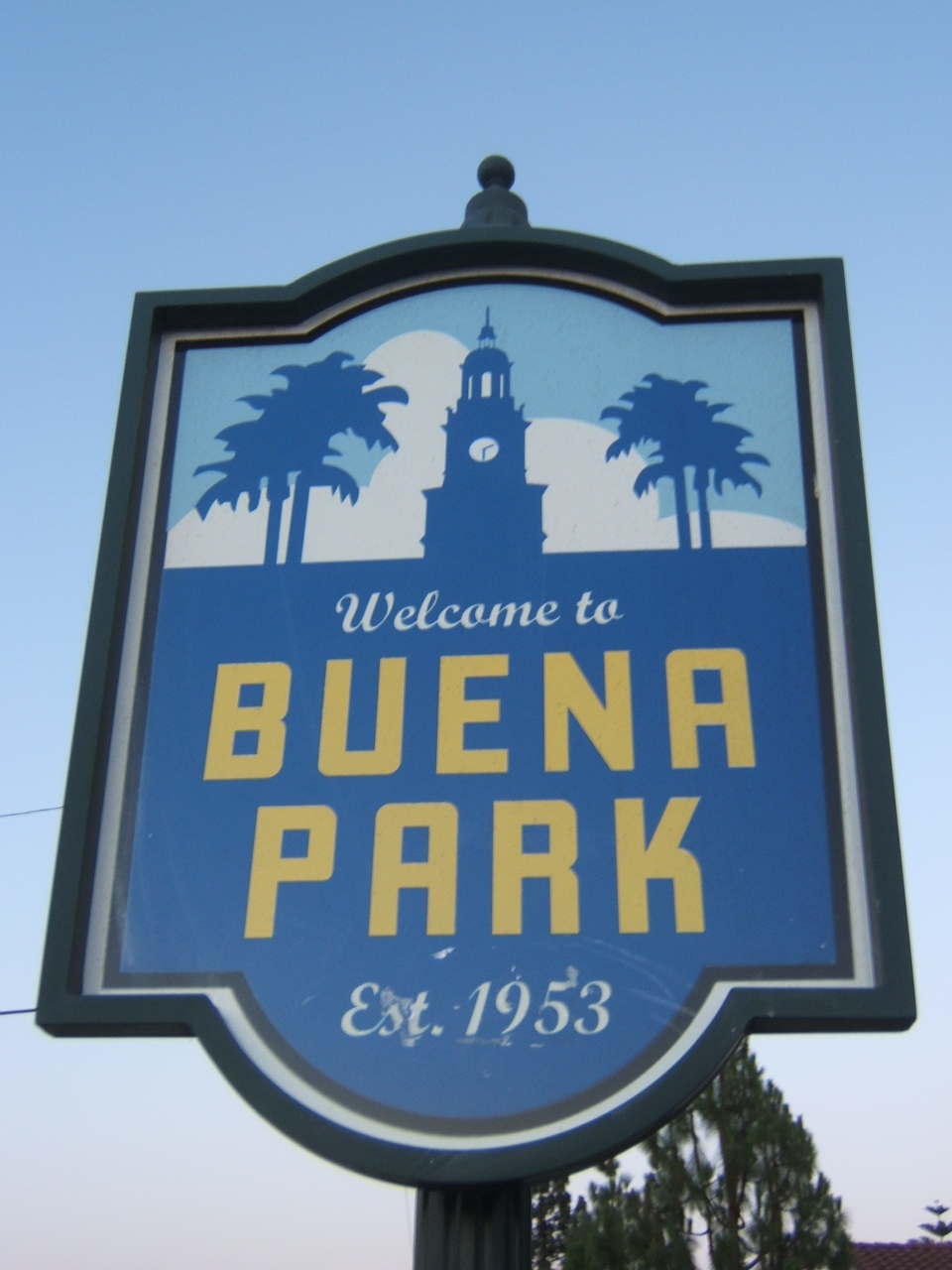 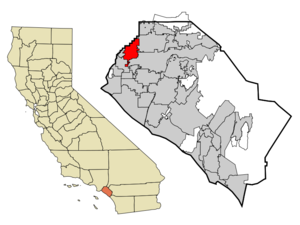 Buena Park is a city located in northwestern . As of the 2000 census, the city had a total population of 78,282. The city is located adjacent to the city of Anaheim and is located 12 miles (20 km) northwest of downtown Santa Ana. The Current metropolitan designation for Buena Park and the Orange County Area is "Santa Ana-Anaheim-Irvine, CA." Buena Park is home to several tourist attractions, most notably ("see Points of interest").

Buena Park is also home to Korean, Chinese, Filipino and s. Buena Park is noted for its Asian-themed restaurants. Many food distributions centers in Buena Park import goods from various countries in the and then ship them to Asian supermarkets across .

Origin of the City Name

The exact derivation of the name Buena Park is uncertain. One theory is that the founder of the city, James A. Whitaker, a wholesale from , used the name of a Chicago suburb by the same name: Buena Park, Illinois. The community in Illinois and the new township in California were both named in 1887, which is the reason for the confusion about which was named first.

Another theory relates to the artesian well and its park-like grounds once located at the current intersection of Artesia and Beach Blvd. (formerly Grand Ave.). Local settlers referred to the area as "Plaza Buena" which means "good park" in Spanish. The mixing of the Spanish and English languages to name Buena Park reflects the major historical influences in the area. There is historic precedent with Yorba Rancho peons using the name "Plaza Buena" decades, if not a century before Whitaker came to southern California.

Original Spanish explorers settled on the enormous ranchos by land grants made by the King of Spain. Manuel Nieto of the Portola Expeditions received such a grant in 1783, which was divided by his heirs into five separate ranchos in 1834. One of them, convert|46806|acre|km2|sing=on Rancho Los Coyotes, included the current site of the City of Buena Park where the rancho’s adobe headquarters was located on what is now Los Coyotes Country Club’s golf course.

The area was transferred from Spanish authority to Mexican rule in 1822 and subsequently California was granted statehood in 1850. Americanization further expanded in the area after completion of the transcontinental railroad in 1869 and its connection to Los Angeles in 1875. By then, Abel Stearns had acquired Rancho Los Coyotes in consideration for loans made to Pio and Adres Pico. In 1885, James A. Whitaker purchased convert|690|acre|km2 of this land from Stearns and in he founded the City of Buena Park in conjunction with the railway development of what we now know as Orange County. The city was incorporated in . An agricultural center when founded (particularly dairy, wine and citrus products) the city is now primarily a residential .

In recent decades, the city became a popular real estate choice for African Americans, Asian Americans and Hispanic Americans. A special shopping area known as "Indian Village" was established in Buena Park in the 1980s by shop owners; this area is similar to Little India in nearby . Recent increases of home prices threaten to drive middle-class and minority homebuyers from the market.Fact|date=March 2007

There were 23,332 households out of which 43.0% had children under the age of 18 living with them, 59.0% were married couples living together, 14.8% had a female householder with no husband present, and 19.7% were non-families. 14.4% of all households were made up of individuals and 5.4% had someone living alone who was 65 years of age or older. The average household size was 3.32 and the average family size was 3.64.

Buena Park is a general law city with a system. Everyday management of city functions is directed by a professional city manager, who is overseen by an elected City Council of five non-partisan members elected at large and whose chair acts as mayor. The city manager is Rick Warsinski.

Buena Park is home to one of the 13 special district libraries in the . The [http://www.buenapark.lib.ca.us] is a single-purpose library district governed by an elected Board of Trustees, and has as its principal source of income a small property tax proration. The library's early history is much like other communities: it operated on and off as a volunteer operation beginning in 1905 at several temporary locations with donated books. It was formally established as a library district through the efforts of the Buena Park Woman's Club in 1919, and, through a few more building changes, is now located at 7150 La Palma Avenue, between Knott Avenue and Western Avenue. The current facility's construction was completed in early 1969 financed by a bond measure passed by the citizens of Buena Park on June 6, 1967. The community's library holds over 125,000 library materials from books to music CDs, magazines to movies, and provides a number of free public programs for all ages every week. It has free Internet service, and free library cards to all California residents. The library also has photocopier and fax services for small fees. The library is also a US Passport Acceptance Agency for the and its service hours are posted at both the Passport Acceptance Agency's and the library's web sites. Its support group, the Volunteer Guild of the Buena Park Library, runs a bookstore and sells gently used materials. The bookstore is located on the Library's second floor.

The city is served by seven different school districts. [http://www.bpsd.k12.ca.us/index.html Buena Park School District] covers nearly the entire northern half of the city, which feeds into the . Centralia, Cypress, Magnolia and Savanna School Districts carve the remaining southern half of the city, feeding into the . is the only high school within city limits. Kennedy, Savanna, Sunny Hills and Western High Schools also all serve the city's students, but are in either Fullerton, La Palma or Anaheim.

Buena Park's E-Zone district, located along Beach Boulevard, is home to several well-known tourist destinations: the venerable and its sister , Pirate's Dinner Adventure Show, a dinner show, and a museum. The Movieland Wax Museum, one of the largest of its kind in the world, was once located in the E-Zone until it closed in 2005. The E-Zone also neighbors Anaheim, with just east by way of Katella Avenue, Ball Road, and Interstate 5.

The City of Buena Park also has its own local history park located on Beach Blvd just south of Interstate 5. On these grounds, the city has preserved several historic buildings. These include the (which serves as the city's local history museum) the , the (which houses the current Chamber of Commerce offices) and the . The Buena Park Historical Society manages and maintains the historical content of the museum. Coming in the summer or fall of 2008, the , after restoration work is complete, will be placed on the grounds near the Whitaker-Jaynes House.

Buena Park's main commercial artery is Beach Boulevard, State Route 39, also home to the city's , the E-Zone entertainment district, and shopping center. The (SR 91) and (I-5) criss-cross the city, connecting it with cities to the east and west, north and south respectively. The provides public bus services, but most residents rely on cars.

is the closest , but the nearest airport with commercial service is , about convert|13|mi|km to the southwest. Both Union Pacific (originally Southern Pacific) and BNSF railroad tracks cross the city. Construction on a station in Buena Park to operate on the latter started in January 2006. The new Metrolink station opened in September 2007. [http://www.octa.net/pdf/bp_metro.pdf]

The Buena Park Metrolink Station is open for business! Here's a link to the photos and newspaper story:http://www.ocregister.com/news/county-station-buena-1838451-park-riders