This is a seat by seat list of candidates in the 2004 Canadian election.

For more information about the election see Canadian federal election, 2004.

Due to the 2001 census, Canada's 301 electoral districts increased to 308 as of April 1, 2004. Boundary changes took effect across the country to even out population redistribution, and seven new districts were formed. Each province has a minimum amount of seats, and therefore it is rare for a province to lose seats in a redistribution. The numbers beside the region names correspond to the map below. 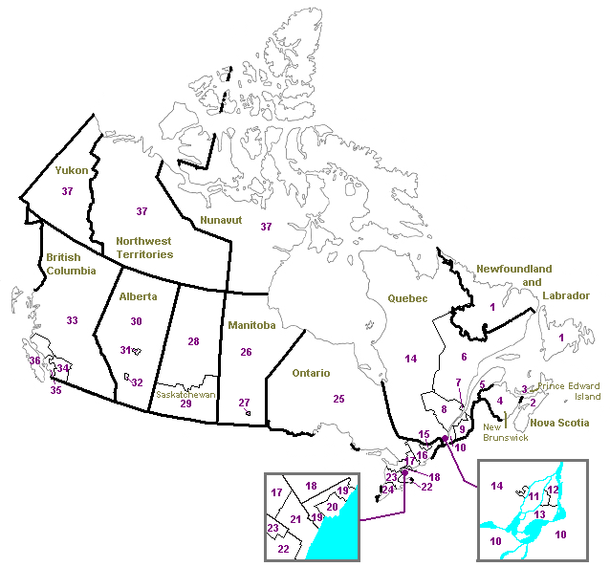 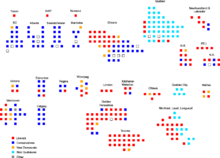 Cabinet Ministers and party leaders are denoted in bold. Candidates who were automatically granted their party's nomination by their leader are denoted with a dagger (†)

Throughout most of recent history, the Liberals have dominated in federal politics in Quebec, even when Quebec voters were simultaneously electing the Parti Québécois at the provincial level.

There have been temporary Progressive Conservative breakthroughs under Diefenbaker in the 1958 election, and under native son Brian Mulroney in the 1984 election and the 1988 election, but these did not last. The 1958 result was helped by an alliance with Maurice Duplessis's formidable provincial electoral machine. But by the 1962 election, Duplessis had died and his Union Nationale party was out of office and in disarray, and Diefenbaker's support in Quebec had evaporated. The Mulroney-era resurgence also collapsed entirely when he retired from politics.

The Bloc Québécois was formed for the 1993 election in the aftermath of the failure of the Meech Lake Accord and Charlottetown Accord, and has won more seats in Quebec than the Liberals in every election it has run in. The number of seats won by the Bloc has declined in each successive election from 1993 to 1997 to 2000. The party has now had a resurgence due to the sponsorship scandal and the unpopularity of Jean Charest's provincial Liberal government, which influences support for the federal Liberals even though the two parties are independent of one another.

Polls show the Bloc with a strong lead, and they may return to the number of seats they had in 1993. However, the Liberals are likely to dominate in many parts of Montreal. Ridings where Anglophone voters are a significant factor are among the safest Liberal seats in all of Canada.

The other two major federal parties, the Conservatives and the New Democratic Party (NDP) are not expected to win any seats and are struggling to move out of single digits in the polls. The NDP in particular has historically never had any electoral success in Quebec.

Ontario was predicted to be the battle ground of this election. Most pundits believed that this is where the election was lost for the Conservatives. Ontario is home to more than one third of all of Canada's ridings. In the last three elections, right wing vote splitting has resulted in just six riding losses for the Liberals, compared to 299 riding wins. However, the Canadian Alliance and the Progressive Conservatives have merged, and they should win many seats in Ontario, especially in rural ridings in midwestern Ontario, Central-eastern Ontario, and Central Ontario. The NDP has some support in various pockets in Ontario in the past, but has only won one riding in the last three elections, and one more in a by-election, both in Windsor. However, the NDP was expected to do well not only in Windsor, but in Hamilton, Downtown Toronto, Ottawa Centre, and possibly even in Northern Ontario.

Manitoba is traditionally split between the NDP, the Liberals, and the Conservatives. This is especially true in the city of Winnipeg where most Manitobans live. However, due to vote splitting in recent elections, neither the Progressive Conservatives or the Canadian Alliance/Reform Party have been able to win in Winnipeg. In rural Manitoba, the Liberals are usually shut out of elections (exception in 1993). Conservative support is normally in the more populous south, with NDP support in the sparsely populated north, which usually only means one seat.

Alberta is unarguably the most Conservative province in Canada. You need only look at the results of the ridings here in the last century to prove this. Alberta has long been a Progressive Conservative province, but with the collapse of the party in 1993, Albertans went to the Reform Party of Canada (later the Canadian Alliance) for their vote. Edmonton seems to be the only exception to this. The Liberals have won in Edmonton six times since 1993, and the NDP has won in Edmonton as well.

British Columbia is what many pundits consider to be the complete opposite of a bellwether region. British Columbia has a history of voting against the government. This has meant the NDP in the 1980s and the Reform/Canadian Alliance in the 1990s. More recently, regional trends have started to appear in B.C. The interior votes very Conservative, as the Canadian Alliance swept this area in 2000. B.C. has in the past been a province that would swing from one extreme to the other going for the right wing Social Credit to the left wing NDP in the past, in not only federal elections but provincial elections. The NDP also does well in British Columbia, or at least has in the past. Recently, they have been reduced to seats in the Vancouver area. There is hope that they will return to more traditional NDP seats on Vancouver Island, and in the interior. The Liberals have also won a few seats in B.C. recently, an area they have traditionally done very poor. Their strengths are in Victoria and in Vancouver.