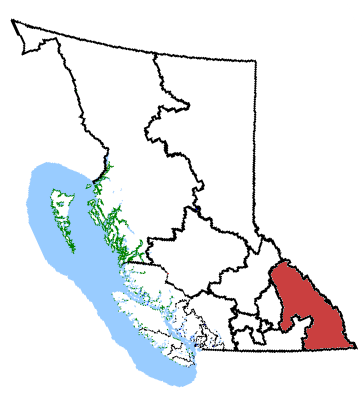 Kootenay—Columbia is a federal electoral district in , , that has been represented in the since 1997.

Consisting of:
* the ;
* those parts of the comprising:
** the village of Nakusp;
** the Town of Creston;
** subdivisions A, B, C and K;
** that part of Subdivision D lying northerly of a line described as follows: commencing at the intersection of the southwesterly production of Cooper Creek with the easterly limit of Subdivision H of the Regional District of Central Kootenay; thence generally northeasterly along said production and said creek to the Duncan River; thence northerly along said river to Hamill Creek; thence generally northeasterly along said creek and its production to the easterly limit of Subdivision D of said regional district;
*those parts of the comprising:
**the City of Revelstoke;
**the Town of Golden;
**subdivisions A and B.

This district was created in 1996 from parts of and ridings.

This riding has elected the following :

Its current Member of Parliament (MP) is Jim Abbott, a former businessman. He was first elected in 1993. He represents the .