Ontario is the largest city in Malheur County, Oregon, United States. It lies along the Snake River at the Idaho border. The population was 10,985 at the 2000 census, with an estimated population of 11,245 in 2006.[3] The city is the largest community in the region of far eastern Oregon, also known as the Western Treasure Valley.

Ontario is the principal city of the Ontario, OR-ID Micropolitan Statistical Area, which includes Malheur County in Oregon and Payette County in Idaho.

Ontario is approximately halfway between Portland and Salt Lake City. It is the closest city to the Idaho border along Interstate 84. The city's slogan is "Where Oregon Begins".

Ontario was founded on June 11, 1883, by developers William Morfitt, Mary Richardson, Daniel Smith, and James Virtue, in anticipation of a railroad planned to go through that part of the state. It was named after Virtue's home province of Ontario in Canada.

Ontario was incorporated by the Oregon Legislative Assembly on February 11, 1899.[4] 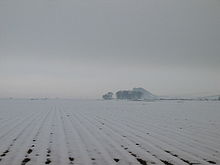 Snowy field near Ontario with Malheur Butte in the background

According to the United States Census Bureau, the city has a total area of 4.5 square miles (12 km2), all of it land.[5]

Located at about river mile 373 on the Snake River, just north of the place where it begins to form the border of Oregon and Idaho, Ontario is served by Interstate 84, U.S. Route 30, and Oregon Route 201. Access to Interstate 84 is provided by exits 374 and 376. The city center is laid out in a simple block pattern aligned with the Union Pacific Railroad, and the city address system is divided by North and South Oregon Street and East and West Idaho Avenue. Moreover, Oregon Street and Idaho Avenue divide the city logically into NW, NE, SW, and SE quadrants and, somewhat unusually[citation needed] for an Oregon city, a preponderance of the city's streets are numbered; numbered avenues radiate north and south from Idaho Avenue whereas numbered streets radiate east and west from Oregon Street. The quadrant designations are prepended to the street name (e.g., SW 4th Ave, NE 3rd St).

Along with Idaho Street and Oregon Avenue, major streets across Ontario include SW 4th Avenue, providing access from the downtown core to Ontario Municipal Airport and the Tony Yturri Memorial Beltline. Built in 1994 and recently connected to I-84 via Exit 374, the beltline provides a bypass route around the northwest side of Ontario, connecting through traffic directly to the airport area and points beyond such as Vale, Nyssa, and the agricultural area south and west of town.

Bully Creek Reservoir is about 25 miles (40 km) west of Ontario, accessed through Vale.[6] 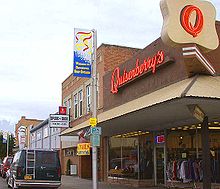 There were 4,084 households out of which 35.6% had children under the age of 18 living with them, 47.4% were married couples living together, 13.1% had a female householder with no husband present, and 35.5% were non-families. 30.4% of all households were made up of individuals and 15.4% had someone living alone who was 65 years of age or older. The average household size was 2.63 and the average family size was 3.30. 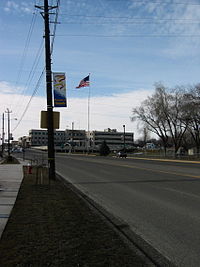 The region's primary industry is the cultivation of russet potatoes, sugar beets, and onions. The Heinz Frozen Food Company (formerly Ore-Ida), a subsidiary of H. J. Heinz Company, processes locally grown potatoes, and annually produces over 600 million pounds (272 million kg) of 75 different potato products, while employing approximately 1,000.[9] Ontario also has a growing retail-based economy which attracts shoppers from throughout the county and from Idaho's Payette County, particularly from the nearby cities of Payette, Fruitland, and New Plymouth. Big-box retailers Wal-Mart and Home Depot dominate the retail sector, however, the lack of a sales tax in the state attracts relocating retailers and shoppers from Idaho communities. Ontario also attracts employees, who benefit from a minimum wage that as of 2005 was 40% higher than the one paid in Idaho.

The Four Rivers Cultural Center, which was named by John and Chaundra Cammack, was named after the Snake, Malheur, Owyhee and Payette rivers, has a museum that traces the history of settlement in the area by the Northern Paiutes and Basque, Japanese American, Hispanic and European American immigrants. The center's theater and conference center contribute regional dollars to the local economy, as does Treasure Valley Community College, located near the cultural center.

Ontario's role as a regional center of economic growth is challenged by the westward expansion of Boise, Idaho, about fifty miles east of the city. While Oregon's lack of a sales tax is an asset, the state's land use laws make it hard for the city to grow a property tax base and match the pace of development seen across the state line in Idaho. An article in the August 14, 2005 edition of The Oregonian noted that half of the staff of the Snake River Correctional Institution, Oregon's largest state prison and a large Ontario employer, live in Idaho, commuting daily across the state line. The article also noted that the land use laws that protect farmland across the state work to a farmer's disadvantage if farmers cannot find a way to compete profitably.

Ontario has one sister city, as designated by Sister Cities International:[11]