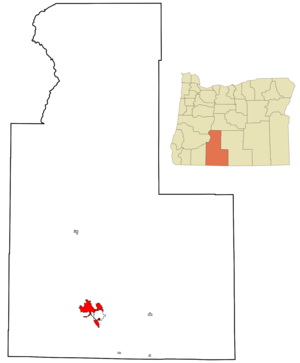 The Klamath Indians were the first inhabitants of the area. Their name for this place was "Yulalona" or "Iwauna", which referred to the phenomenon of the Link River flowing upstream when the south wind blew hard. Their name for the falls was "Tiwishkeni," or "where the falling waters rush"Fact|date=June 2008.

The Modoc Tribe's homeland is about 20 miles south of Klamath Falls, and the war of 1872 - 1873 was a hugely expensive campaign for the US Cavalry, costing an estimated $500,000--the equivalent over 8 Million in yr 2000 dollars. 17 Indians and 83 whites were killed. [http://www.militarymuseum.org/Modoc1.html]

The , which passes through the lower Klamath area, was blazed in 1846 from west to east in an attempt to provide a safer route for emigrants on the Oregon TrailFact|date=June 2008.

The began in 1906 to drain marshland to allow for agriculture. With the building of the main "A" Canal, water was first made available , . Veterans of World War I and World War II were given homesteading opportunities on the reclaimed land. [http://www.ohs.org/education/oregonhistory/historical_records/dspDocument.cfm?doc_ID=14A15583-B844-8C19-97B70423A794A6A1]

During , a Japanese-American , the , was located in nearby , and a satellite of the , POW camp was located just on the Oregon-California border near the town of . In May 1945, about 30 miles east of Klamath Falls, (near ) a Japanese killed a woman and five children on a church outing. This is said to be the only Japanese-inflicted casualty on the US mainland during the war. [ [http://www.bookmice.net/darkchilde/japan/balloon.html Balloon bomb attacks on the US ] ] Timber harvesting through the use of railroad was extensive in Klamath County for the first few decades of the 20th century. [http://osorail.com/Oso_Publishing/klamath.html] With the arrival of the Union Pacific in 1909, Klamath Falls grew quickly from a few hundred to several thousand. Dozens of lumber mills cut fir and pine lumber, and the industry flourished until the late 1980s when the and other endangered species were driving forces in changing western forest policy.

The city made national headlines in 2001 when a court decision was made to shut off Klamath Project irrigation water on because of Endangered Species Act requirements. The Lost River sucker and were listed on the Federal List in 1988, and when drought struck in 2001, a panel of scientists stated that further diversion of water for agriculture would be detrimental to these species, which reside in the , as well as to the protected which spawn in the . After many protests by farmers and a criticized revision of the biologists' decision, a new plan was implemented in early 2002 to resume irrigation to farmers.

This may have led to mass die-off of the salmon, practically shutting down the fishing industry in the region and leading to over $60 million in disaster aid being given to fishermen to offset losses.

In March 2006, the plan was found to be in violation of the and a new ruling was made to shut off irrigation if natural water levels go below a specified point.

According to a National Academy of Sciences report of , , limiting irrigation water did little if any to help endangered fish and may have hurt the populations. [ [http://www8.nationalacademies.org/onpinews/newsitem.aspx?RecordID=10838 Broader Approach Needed for Protection And Recovery of Fish in Klamath River Basin] , 2003-10-22] However, this report has been widely criticized as politically motivated.

Klamath Falls has a landscape. The older part of the city sits on natural . These have been used for the heating of homes and streets, primarily in the downtown area.

9.32% of the population are Hispanic or Latino of any race.

Klamath Falls is home to the 173rd Fighter Wing of the , stationed at airbase.

*KCSD provides five high schools one of which is in Klamath Falls: Henley High School [http://henley-high.kcsd.k12.or.us/] .

Klamath Falls is home to many outdoor winter and summer activities. The nearby , features a golf course designed by Fact|date=June 2008, an ice skating arena , trailriding, and overlooks , the largest natural lake in the Pacific NorthwestFact|date=June 2008 There is also a canoe trail through the wildlife refuge at Rocky Point.

Klamath Falls is located on the Pacific Flyway, and large numbers of waterfowl and raptors are seen at all times of the year. The largest concentration of Bald Eagles in the lower 48 winter in Bear ValleyFact|date=June 2008, just 10 miles west of Klamath Falls, near Keno, and the American White Pelican shows in great numbers in summer.

is 50 miles north of Klamath Falls and the 33 mile rim drive circling the lake is a favorite of cyclists. Winter cross country skiing in the park is also very popular. The more than mile high Crater Lake Marathon [http://www.craterlakerimruns.com/] is an annual event.

, the national passenger rail system, serves Klamath Falls, operating its daily in both directions between and .

Klamath Falls has one sister city [http://www.sister-cities.org/icrc/directory/usa/OR] , as designated by :