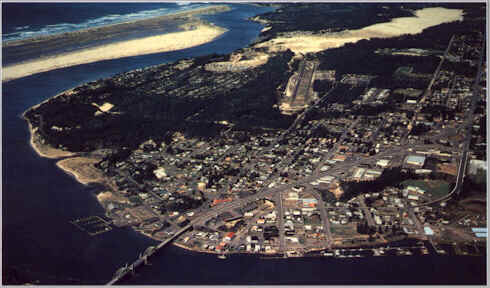 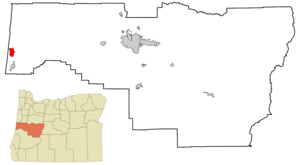 Florence is a city in Lane County, , . One tradition states the city was named for state senator A.B. Florence, who represented Lane County from 1858-1860; another is that Florence was named for a French vessel that was wrecked at the mouth of the , .

Florence is located on the at the mouth of the Siuslaw River about the same latitude as , and is approximately midway between the other major central Oregon coastal cities of Newport and Coos Bay.

*Old Town Florence is located on the Siuslaw riverfront. The marina is to the east and the 1936 is to the west. The new Boardwalk promenade was built along the marina to improve the area. [ [http://www.florenceoregon.net/business.htm Florence Oregon Business Development Resources ] ]
*
* house
*
*

Florence is also known as the site of the , an incident when the Oregon State Highway Division tried to remove a beached whale by —with unintended results.

Florence has one sister city:

Yamagata-shi was established in 2003 by the merger of Ijira (Florence's former sister-city), Takatomi, and Miyama. [A complete (but somewhat outdated) history of the relationship may be found [http://www.florencechamber.com/VisSistercity.html here on the City of Florence's website] ]