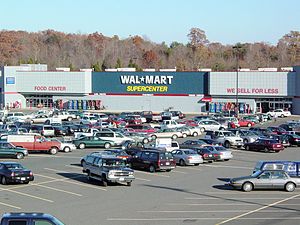 A big-box store (also supercenter, superstore, or megastore) is a physically large retail establishment, usually part of a chain. The term sometimes also refers, by extension, to the company that operates the store. Examples include large department stores such as Walmart and Target.

Typical characteristics include the following:

Generally, big-box stores can be broken down into two categories: general merchandise (examples include Walmart and Target), and specialty stores (such as Menards, Barnes and Noble, or Best Buy) which specialize in goods within a specific range, such as hardware, books, or electronics. In recent years, many traditional retailers—such as Tesco and Praktiker—have opened stores in the big-box-store format in an effort to compete with big-box chains, which are expanding internationally as their home markets reach maturity.[1]

Labor unions oppose big-box development because the employees of such stores are usually not unionized. Unions are especially concerned about the grocery market because stores such as Target, Walmart, and Kmart now sell groceries.[2] Unions and cities are attempting to use land use ordinances to restrict these businesses.[3]

Some cities and towns are worried about the economic impact of big-box retailers on existing downtown merchants or the sprawl-inducing impacts on character of such developments, as these stores are often associated with heavy traffic in the areas around the store locations. Some communities have adopted a higher level of architectural treatment and regulations to ensure that the superstores relate better to their environs and neighbors. Many already have regulations addressing signage and landscaping.

There are also concerns surrounding traffic and roads. The increased traffic leads to more air pollution in an area and higher taxes in order to maintain the roads.[4]

The first company in Australia to use the big-box model is Bunnings Warehouse. Mitre 10 Australia adopted the model with the "Mitre 10 Mega" stores first opening at Beenleigh, Queensland in 2004. Ikea began operating in Australia in 1975.

Apart from major American big-box stores such as Walmart Canada, Home Depot and Lowe's, there are many retail chains operating exclusively in Canada. These include stores such as (combined with slashes by the owner) Zellers/Home Outfitters/The Bay, Loblaws/Real Canadian Superstore, Rona, Winners/Homesense, Canadian Tire/Mark's Work Wearhouse/Sport Chek, Shoppers Drug Mart, and many others.

The indigenous Loblaw Companies Limited has expanded and multiplied its Real Canadian Superstore (and Maxi & Cie in Quebec) branded outlets to try to fill any genuine big-box market and fend off the damaging competition that a large Walmart penetration would inflict on Canadian-based retailers.

Many configurations exist: the hypermarket that sells many kinds of goods under one roof (like French chains Carrefour, Auchan, and E.Leclerc), most of them are integrated within a shopping mall; the supermarket that is a smaller version of a hypermarket; the market located in city centers; department stores which first appeared in Paris, then some opened in other parts of the world; the superstore that mainly sells goods in a particular domain (automotive, electronics, home furniture, etc.); and warehouse stores. 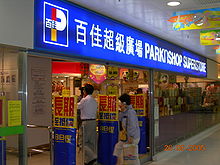 A superstore in Hong Kong.

However, due to the fact that Hong Kong is a very densely populated city, the sizes of superstores are considerablely smaller than those in other countries. Some superstores are running at deficit (such as Chelsea Heights) therefore it stopped selling fresh fish. Furthermore, some PARKnSHOP superstores and megastores such as Fortress World, belong to the same corporation, Hutchison Whampoa.

India is currently going through a retail revolution with the introduction of Big Bazaar in 2001.

In Ireland, large merchandise stores in the style of U.S. superstores were not a part of the retail sector until recent decades.[citation needed] Dunnes Stores have traditionally had a supermarket-plus-household-and-clothes model and now have some large stores as well as Tesco Ireland who now run upwards of 19 hypermarkets across the country.

The big-box phenomenon hit New Zealand in the late 1980s, with the introduction of Kmart Australia, and later the "Warehouse" superstore, a local company. Mitre 10 New Zealand opened their first Mega in 2004 at Hastings, New Zealand six months before the Australian Mega store, it opened to great success with 20 more stores opening in the year two years. Australian-owned Bunnings Warehouse opened its first store in New Zealand in 2006.

In the United Kingdom, large warehouse style general merchandise stores along the lines of U.S. superstores are not a traditional part of the retail sector but in recent times shopping styles have changed. Some large-scale retailers are developing, e.g., Tesco Extra stores, and the largest branches of Asda, but these are supermarkets which have evolved into hypermarkets selling a broader range of non-food goods. The term superstore is not much used in the UK. When it is used, it may refer to a supermarket that is larger than a convenience store but smaller than a hypermarket, but such establishments are nearly always referred to as "supermarkets" in practice, or simply as the name of the chain in question. It is also sometimes used by non-food retailers for stores which are larger than their normal store, in which case the meaning varies from company to company, but usually bears no resemblance to the U.S. definition. It is mainly used by downmarket retailers and confers little prestige.

As in the U.S., the term anchor store is used to denote a larger-than-normal branch of a chain store which is considered to draw a particularly large volume of customers to a shopping centre or retail park. Across Britain, large-scale shopping malls on the edges of towns and cities, containing "hypermarket" anchor stores (e.g., large ASDA or Dunnes Stores) are increasingly popular, especially since the 1980s.

In the United States, a superstore is usually a type of department store, equivalent to the European term hypermarket. However sometimes it refers to specialist category killer retailers.

Usually associated with large chains such as Target and Walmart, a superstore sells a wide range of products, from toys and electronics to clothing and groceries and even furniture, sporting goods and automotive supplies. These types of stores advertise "one stop shopping", where customers can stop just once at their store and buy everything they need or want. Most superstores are located on a single level, as opposed to many department stores which are often multi-leveled. 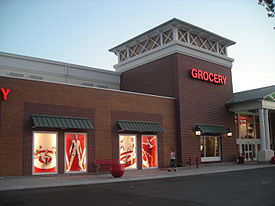 Meijer is generally credited with pioneering the superstore concept in the United States. The first Meijer Superstore opened in Grand Rapids, Michigan in 1962 (In contrast, Walmart didn't open its first Supercenter until 1988).

The term "superstore" is also used for some large specialist retailers, such as Menards which fills the gap of building supplies in other superstores by supplying just those items in their stores. Another example is Best Buy which stocks mostly high technology/electronics items, with occasional home appliances.