The retailer is known for its Canadian Tire "money" which is a pioneering loyalty program first introduced in 1958. It is also known for its innovative advertising achieved through cross-merchandising.

The first Canadian Tire store opened on September 15, 1922 in Toronto, Ontario by J. William Billes and Alfred J. Billes. This store, which was located at the corner of Yonge and Isabella, bought Hamilton Tire and Garage Ltd. in Toronto's east end with combined savings of $1,800.[2] In 1934, the first official associate store opened in Hamilton, Ontario.[3] In 1937, the store and head office was moved to Yonge St. and Church St. This location remains as an associate store in the chain today. In 1928, the store issued its first catalogue, becoming one of Canada's most famous mail order businesses. To this day, the company has grown to over 482 stores. A publicly traded company on the Toronto Stock Exchange, Canadian Tire shares are widely held.

Canadian Tire Corporation has tried on two occasions to expand into the American market. In the 1980s the White Auto Store chain, concentrated in Texas was acquired and cost Canadian Tire $200 million to fold. In 1991 a second attempt with the Auto Source chain with grand plans of 100 to 120 outlets in the US Midwest was started. The Auto Source chain was sold costing the company a reported $80.6 million.

Canadian Tire has experienced a period of significant growth and success, having transformed its store network in three major waves beginning in 1994. In its last five-year strategic plan it attained top-quartile total returns to shareholders among all publicly traded North American retailers, with a total return of 286%.

Certain merchandise items are branded specifically for Canadian Tire. The most recognized of these are Mastercraft, SuperCycle (bicycles), BluePlanet (eco-friendly household cleaners, CFL bulbs and other innovative green items) and Motomaster (tires, batteries and other automotive goods). 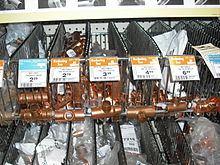 As Canada's largest retailer, it is said that 85 percent of all Canadians live within a 15-minute drive of a Canadian Tire store; that nine out of ten adult Canadians shop at one at least twice a year; and that 40 percent of Canadians shop at Canadian Tire every week.[4] There are 482 stores across Canada. Canadian Tire Stores are each operated by an associate dealer. The buildings and lands are owned or leased by the company and everything inside the building, from fixtures to merchandise, is owned by the dealer. The majority of stores operate in distinct categories of automotive parts, automotive service, tools and hardware, sporting goods, housewares, and seasonal.

Since 2003 Canadian Tire has converted the majority of its old traditional and new-format stores, as well as built new stores, making it the most modern network in the country. Last year, Canadian Tire introduced its two newest store formats- the Smart store and Small Market store. Currently, the largest Canadian Tire store is located in Dartmouth, Nova Scotia. It incorporates a Marks Work Wearhouse (owned by Canadian Tire) within its doors. Also, new-format Canadian Tire stores also exist in indoor mall locations, such as Place Vertu in Montreal (where it took the former Kmart location after Kmart's withdrawal from Canada in 1998, but Canadian Tire opened in 2000 in that mall), and Confederation Mall in Saskatoon, where Canadian Tire took up the area formerly occupied by Walmart in 2011.

In May 2011 Canadian Tire announced the purchase of Forzani Group, a Canadian sporting goods retailer. "The deal represents Canadian Tire's first major acquisition since it took over Mark's Work Warehouse a decade ago."[5]

Canadian Tire Online was an online purchasing system where customers of Canadian Tire could order goods online. On January 1, 2009, citing a change in consumer shopping habits and convenience of its bricks and mortar stores, the Company announced the end of online sales effective at the end of January 2009.[6][7]

PartSource is an automotive parts and accessories specialty chain, which has 87 stores across Nova Scotia, Ontario, Manitoba, Saskatchewan, and Alberta. It was designed to meet the needs of major purchasers of automotive parts including commercial automotive installers as well as serious do it yourself customers. While many people are aware of the Canadian Tire/PartSource affiliation, many are unaware that the individual stores are not affiliated. While Canadian Tire Retail stores are Associate dealer operated, PartSource stores are a mix of franchisee and Canadian Tire Corporation operated.

Canadian Tire Financial Services is the credit arm of the company. This division operates a bank, under Canada's Bank Act. Since achieving the bank designation, Canadian Tire Financial Services has launched additional credit and loan products including Personal Loans and Lines of Credit. Its primary business is branded credit cards that give customers a choice of payment options, as well as extra Canadian Tire money. CTFS also markets a variety of insurance and warranty products, and operates an emergency roadside service. The division also manages the Canadian Tire 'money' On the Card loyalty program to credit card customers.

In October 2008, Canadian Tire Financial Services was named one of "Canada's Top 100 Employers" by Mediacorp Canada Inc., and was featured in Maclean's newsmagazine.[8]

Launched in 1958, Canadian Tire Petroleum is Canada's largest independent retailer of gasoline. It has more than 273 locations as well as more than 73 Simoniz car washes in Canada. In Ontario, Canadian Tire Petroleum also operates a network of Pit Stop locations offering customers a variety of automotive services including oil changes, rust check and other services. Canadian Tire's famous "Canadian Tire money" loyalty program was launched through the gas bars as "Gas Bonus Coupons". The program proved so popular that it was later expanded to the entire enterprise.

CTP has opened 3 'Q' stop stores featuring a mini-grocery store as well as other items.

Mark's Work Wearhouse has become Canada's largest supplier of business casual, weekend and work wear clothing and accessories for men and women. It is the largest industrial apparel and footwear retailer and the second largest casual pants and jeans retailer in Canada. It operates over 378 stores across Canada including L'Équipeur stores in Québec.

For many years, Canadian Tire's Christmas ads featured Santa Claus and Ebenezer Scrooge arguing about whether Canadian Tire's great selection or their low prices are the better reason to do your Christmas shopping there, with the tagline "Give like Santa, save like Scrooge". A stamp was issued by Canada Post commemorating Canadian Tire's 75th anniversary which depicted the famous ad of a boy receiving his first bicycle which was purchased by his father at Canadian Tire.

From 1997 to 2005, the company's ads have featured the "Canadian Tire couple". The male role also known as the Canadian Tire guy was played by Canadian actor Ted Simonett, and Gloria Slade played the female role. They are usually showing off a new product to one of their neighbours, who are in need of a certain tool. The 'Canadian Tire Couple' were once featured on Royal Canadian Air Farce as one of their targets of the year, as "Canada's most annoying couple". They also made a guest appearance on Royal Canadian Air Farce as actors in a parody skit against them.

In early 2006, ads featuring the couple were phased out in favor of a new campaign featuring overhead signs found in Canadian Tire's store aisles. For example, if an ad depicted a couple deciding to spruce up their back yard, signs indicating the aisles where what they needed would be found creakily lowered from overhead ("Aisle 10 - Patio Furniture", "Aisle 28 - Garden Hoses").

The company is one of Canada's largest advertisers and has nearly universal brand awareness.

Canadian Tire 'money' distinguishes the company from other retailers in Canada. These coupons, an incentive for non-credit purchases, are a national cultural fixture and feature the fictional character Sandy McTire on every bill. Customers using Canadian Tire's Options Mastercard for their purchases also receive an additional 10% Canadian Tire money, in electronic form, "on the card".