The Company operates in Canada and Asia through the brand name “Manulife Financial” and in the United States primarily through its John Hancock division.

Manulife Financial is one of the largest life insurance companies in the world as measured by market capitalization.

The Manufacturers Life Insurance Company was founded in 1887. Its first president was the first Prime Minister of Canada, Sir John A. Macdonald. In 1897, Manulife Financial expanded its operations into Asia, including China and Hong Kong.

In 2002, Manulife–Sinochem Life Insurance Co. Ltd. was granted approval by the China Insurance Regulatory Commission (CIRC) to officially open its branch office in Guangzhou, China. This was the first branch license granted by CIRC to a foreign invested joint–venture life insurance company. Later in 2003, Manulife-Sinochem received approval to open a branch office in Beijing. This was Manulife-Sinochem’s second branch license and the first multiple-branch license granted to a foreign-invested joint venture life insurance company. Manulife-Sinochem is now licensed to operate in more than 40 cities across China.[3]

In 2003, Manulife Financial Corporation and John Hancock Financial Services, Inc. and (including its Canadian subsidiary Maritime Life) announced that their Boards of Directors had each unanimously agreed to a tax–free stock–for–stock merger of the companies creating a leading global insurance franchise. Completed in April 2004, the merger created the largest life insurer in Canada, second largest in North America, and fifth largest in the world at the time.[2]

In 2008, Gail Cook-Bennett became the Chair of Manulife Financial’s Board of Directors.

In 2009, Donald Guloien, the Chief Investment Officer, succeeded Dominic D’Alessandro as President and CEO of Manulife Financial. Shortly before his departure, facing a shareholder revolt as the firm posted a quarterly loss for the first time in its public history, D'Alessandro modified his retirement package; the restricted units would only vest for a total of $10 million if the shares reached $36 by the end of 2011, and he would receive $5 million if the shares hit $30. However, the first initiatives under Guloien's leadership were a dividend cut and an equity offering to bolster Manulife's capital levels, making it difficult for the share price to reach the target levels needed to vest. 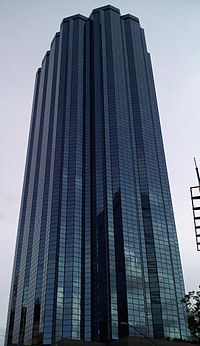 Manulife Financial was worldwide sponsor for 2008 Summer Olympics. The sponsorship was acquired along with John Hancock Financial Services.

Manulife is the namesake tenant in the tallest building in Edmonton, Alberta, Manulife Place.