Baker City is a city in and the county seat of Baker County, Oregon, United States.[4] It was named after Edward D. Baker.[5] The population was 9,828 at the 2010 census. 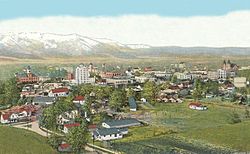 Platted in 1865,[1] Baker City grew slowly in the beginning.[6] A post office was established on March 27, 1866, but Baker City was not incorporated until 1874.[1] The city[1] and county were named in honor of U.S. Senator Edward D. Baker, the only sitting senator to be killed in a military engagement.[7]

The Oregon Short Line Railroad came to Baker City in 1884, prompting growth; by 1900 it was the largest city between Salt Lake City and Portland and a trading center for a broad region.[1] In 1911 the city dropped "City" from its name, but restored it in the late 1980s in recognition of its history and to further encourage tourism.

The Roman Catholic Diocese of Baker City was established on June 19, 1903, after which the Cathedral of Saint Francis de Sales was built in Baker City.[8] In 1918, Baker was the subject of national interest when the 1918 Solar eclipse took place and the U.S. Naval Observatory decided to base their observations here.[9]

According to the United States Census Bureau, the city has a total area of 6.9 square miles (18 km2), all of it land.

The city is situated in a valley between the Wallowa Mountains to the east and the Elkhorn Mountains, part of the Blue Mountains to the west, with the Powder River running through the center of downtown on its way to the Snake River.

Baker City hosts many annual festivals, including the Miners' Jubilee on 3rd weekend of July, which celebrates the mining history of the area and the filming of the Lee Marvin and Clint Eastwood film, Paint Your Wagon in the city.[10] The Miners' Jubilee was originally launched in 1934 as the Baker Mining Jubilee, but lapsed after 1941 because of World War II and a declining interest in mining. The event was revived by Richard and Marge Haynes in 1975. The couple organized the celebration for two years before handing it over to the Baker County Chamber of Commerce.[11]

The Elkhorn Classic bicycle race is based out of Baker City. The city hosts the Oregon School Activities Association Class 1A girls and boys basketball tournaments every year at Baker High School in March. Baker City hosts the East-West Shrine High School football game at the end of July. The Hell's Canyon Motorcycle Rally is also held in Baker City, in June.

Sections of the Wallowa–Whitman National Forest are to the west and to the northeast of Baker City, which serves as the forest headquarters.

Interstate 84 runs along the eastern edge of Baker City, while U.S. Route 30 passes through its downtown area. Oregon Route 7 leaves Baker City to the south to the city of Sumpter and beyond. Oregon Route 86 heads north and east past the National Historic Oregon Trail Interpretive Center and on to the cities of Richland and Halfway.

Baker City is served by the Baker City Municipal Airport.

Baker City is also served by the Huntington Subdivision[citation needed] of the Union Pacific Railroad, originally the Oregon Railway and Navigation Company. Between 1977 and 1997 the city was a regular stop along the former route of Amtrak's Pioneer between Chicago, Salt Lake City, Boise, Portland, and Seattle.

Baker Middle School was designed by Ellis F. Lawrence and completed in 1917. It is constructed from local tuff and is a stripped classical style. As of 2011 the building is unoccupied and was on the Historic Preservation League of Oregon Most Endangered Places in Oregon 2011 list.[18]

Baker City has one sister city[20]