Benton County is a county located in the U.S. state of Oregon. The county was named after Thomas Hart Benton, a U.S. senator who advocated U.S. control over the Oregon Country. In 2010, the county's population was 85,579. It is coextensive with the Corvallis Metropolitan Statistical Area. Its county seat is Corvallis.

Along with Oregon State University, agriculture, lumber, wood products, and some printing technology research and development form the economic base of the county. A substantial portion of the nation's research in forestry, agriculture, engineering, education and the sciences takes place at OSU.

Benton County has the lowest church attendance per capita of any county in the nation (25% attendance).[2]

Benton County was created from Polk County by an act of the Provisional Government of Oregon in 1847. The county was created out of an area originally inhabited by the Klickitat, who rented it from the Kalapuyas for use as hunting grounds. All Indian claims to land within Benton County were ceded in the Treaty of Dayton in 1855.

At that time, the boundaries began at the intersection of Polk County and the Willamette River, extended south as far as the California border and as far west as the Pacific Ocean. Later, portions of Benton County were taken to form Coos, Curry, Douglas, Jackson, Josephine, Lane and Lincoln Counties, leaving Benton County in its present form.

The city of Marysville, later renamed Corvallis, was made the county seat in 1851. In 1862 Corvallis became the site of the Oregon State Agricultural College, known today as Oregon State University.

The current Benton County Sheriff is Diana Simpson. She was elected on November 7, 2006 as the first woman sheriff of Benton County and the first elected female sheriff in Oregon.[citation needed] 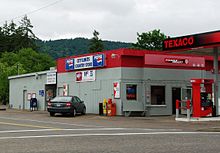