Recorded history begins with the construction of the Orange Grove House of Refuge in 1876. The house derived its name from the grove of mature sour orange and other tropical fruit trees found at the site chosen for the house of refuge, but no record or evidence of who planted the trees has survived.

Settlement began around 1884, when African-Americans from the Panhandle of Florida purchased land a little inland from the Orange Grove House of Refuge and began farming. By 1894 the Black community was large enough to establish the first school in the area.

In 1894 William S. Linton, a Republican US Congressman for Saginaw, Michigan, bought a tract of land just west of the Orange Grove House of Refuge, and began selling plots in what he hoped would become a farming community. Initially, this community was named after Linton. In 1896 Henry Flagler extended his Florida East Coast Railroad south from West Palm Beach to Miami, with a station at Linton.

The Linton settlers began to achieve success with truck farming of winter vegetables for the northern market. A hard freeze in 1898 was a setback, and many of the settlers left, including William Linton. Partly in an attempt to change the community's luck, or to leave behind a bad reputation, the settlement's name was changed in 1901 to Delray, after the Detroit neighborhood of Delray ("Delray" being the anglicized spelling of "Del Rey," which is Spanish for "of the king"), which in turn was named after the Mexican-American War's Battle of Molino del Rey).

By 1910, Delray had a population of 250. In 1911, the area was chartered by the State of Florida as an incorporated town. In the same year, pineapple and tomato canning plants were built. Pineapples became the primary crop of the area. This is reflected in the name of the present day Pineapple Grove neighborhood near downtown Delray Beach. By 1920, Delray's population had reached 1,051. 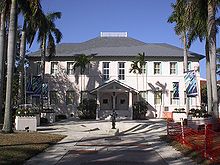 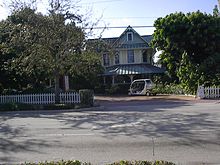 The John and Elizabeth Shaw Sundy House is on the National Register of Historic Places. 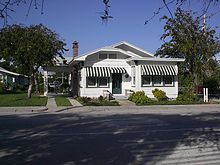 Cason Cottage, built in 1915, is operated as a museum by the Delray Beach Historical Society.

In the 1920s, drainage of the Everglades west of Delray lowered the water table, making it harder to grow pineapples, while the extension of the Florida East Coast Railway to Key West resulted in competition from Cuban pineapples for the markets of the northern United States.

The Florida land boom of the 1920s brought renewed prosperity to Delray. Tourism and real estate speculation became important parts of the local economy. Delray issued bonds to raise money to install water and sewer lines, paved streets, and sidewalks. Several hotels were built. At that time Delray was the largest town on the east coast of Florida between West Palm Beach and Fort Lauderdale. The collapse of the land boom in 1926 left Delray saddled with high bond debts, and greatly reduced income from property taxes.

Delray was separated from the Atlantic Ocean beach by the Florida East Coast Canal (now part of the Intracoastal Waterway). In 1923 the area between the canal and the ocean was incorporated as Delray Beach. In 1927 Delray and Delray Beach merged into one town named Delray Beach.

Since the end of World War II, downtown Delray, located in the eastern part of the city, along Atlantic Avenue, east of I-95 and stretching to the beach, has undergone a large scale renovation. The Delray Beach Tennis Center has brought business to the area. It has hosted several major international tennis events such as the April 2005 Fed Cup (USA vs. Belgium, the April 2004 Davis Cup (USA vs. Sweden), the Delray Beach International Tennis Championships (ATP Event), and the Chris Evert / Bank of America Pro Celebrity.

Several local historic landmark structures were renovated during the last decade of the 20th century. These include Old School Square, formerly Delray Elementary School and Delray High School, since turned into a cultural center; and the Colony Hotel.[7] Old School Square comprises the Crest Theatre, a venue for the performing arts, in the former High School building; the 1925 Gymnasium, restored to maintain its appearance, which has since become a popular venue for local events such as wedding receptions and dances; the Cornell Museum of Art and History, built in the restored Elementary School; and a recently constructed outdoor entertainment pavilion, which serves as a venue for musical performances and has also been used for events such as political rallies.

The historic home of teacher/principal Solomon D. Spady was renovated and turned into the Spady Cultural Heritage Museum. The Spady Museum houses black archives. It hosts exhibits and programs designed to recognize the efforts of blacks who were instrumental in shaping Delray Beach and Palm Beach County.[8] In 2007 the museum was expanded by renovating a 1935 cottage as a Kid's Cultural Clubhouse, and the construction of a 50-seat amphitheater named for C. Spencer Pompey, a pioneer black educator.[9]

Atlantic Community High School was rebuilt in 2005 on a different site from the previous school, a plan which was met with much contention.[10][11]

In 2007, Delray Beach was labeled as the drug recovery capital of the United States because it had one of the country’s largest recovery communities and relative number of halfway houses.[13] However, as of July 7, 2009, the mayor and the city commissioners have approved ordinances that change the status of Delray Beach as the recovery capital, by making it illegal for sober houses and other transient rentals to operate in the area.[14] These ordinances may be tested in the courts in the future.[14]

In earlier years downtown Delray was centered along Atlantic Avenue as far west as Swinton Avenue and as far east as the intracoastal waterway. Downtown has expanded since then. In 2010, downtown extends west to I-95 and east as the Atlantic Ocean; The north-south boundaries extend roughly two blocks north and south of Atlantic Avenue.

As of 2000, Delray Beach had the sixteenth highest percentage of Haitian residents in the US, with 10.50% of the population.[18]

Delray Beach International Tennis Championships (ITC) is an ATP World Tour 250 series men's tennis tournament held every year in the city. It is played on hard courts. The event was held in Coral Springs from 1993–1999; in 1999, it was relocated to the Delray Beach Tennis Center. American Todd Martin won the first ever ITC in 1993.[citation needed].

On July 20, 2010, the city's commissioners proclaimed that the city's name would be officially changed to Tennis Beach for one week in honor of its nomination by the United States Tennis Association as one of the top tennis towns in the United States.[19]

Pet Airways has its headquarters in Delray Beach.[20]

Downtown Delray Beach is a retail, cultural, and residential hub. The area offers restaurants, retail, nightclubs, and art galleries. The city presents a pedestrian-friendly atmosphere,[citation needed] which is aided by the prevalence of parallel parking. In addition, there are a number of free municipal parking lots and garages.[21]

In 2009, expansion of the Downtown Delray Beach Arts District was established that features galleries, and cultural organizations in South Florida. These have existed in Delray for more than 20 years along the Atlantic Avenue and the connecting side streets.

The Delray Affair is a three day long art and street fair, in the Downtown Delray Arts District annually.[citation needed]

The Delray Beach Garlic Fest is a three day music, food, and art festival held annually on the grounds of Old School Square.[citation needed] Originally held in November, in 2006 it was moved to the second weekend of February.

Art & Jazz on the Avenue, held six times a year, is produced by the Delray Beach Downtown Marketing Cooperative.

Gallery Walk held every Friday nights 7pm to 10pm where downtown galleries, art studios, and showrooms open their doors to the public for an evening of art, music, & refreshments along Atlantic Avenue in the Downtown Delray Arts District.[citation needed]

Downtown Delray has had a building boom from roughly 2003-2008. New mixed-use development projects have recently been constructed in the areas immediately north and south of Atlantic Avenue. To accommodate the anticipated growth the city has also built two new municipal parking garages.