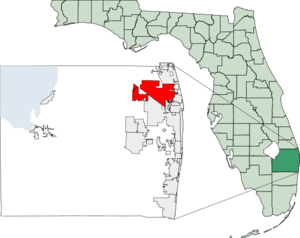 Palm Beach Gardens is a city in Palm Beach County in the of . The city is in the center of a rapidly-developing area north of West Palm Beach in the northern part of the county and the . As of 2006, the population was estimated by the is 48,944. The city has relatively strict laws and also a number of gated communities.

Prior to development, the land that became Palm Beach Gardens was primarily cattle ranches and s, as well as land further west. In 1959, wealthy landowner and insurance magnate announced plans to develop 4,000 acres (16 km²) and build homes for 55,000 people. He chose the name Palm Beach Gardens after his initial choice, Palm Beach City, was denied by the , because of the similarity of the name to the nearby Palm Beach. MacArthur planned to build a "garden city" so he altered the name only The city was incorporated as a "paper town" (meaning that it existed only on paper) in 1959. The 1960 Census recorded that the city officially had a population of one, apparently a squatter whom MacArthur had allowed to stay on his property.

Rapid development took place in the 1960s. By 1970 the city had a population approaching 7,000 people. To showcase his new community, MacArthur purchased an 80-year-old tree located in nearby Lake Park, that was to be cut down to enlarge a dentist's office. It cost $30,000 and 1008 hours of manpower to move it. A second banyan was moved the following year. While moving the first banyan tree over the , the massive tree shifted and disconnected the telephone and telegraph lines running adjacent to the railroad, cutting off most communications between Miami, 80 miles to the south, and the outside world until the damage could be repaired. These trees still remain at the center of MacArthur Boulevard near Northlake Boulevard and are still featured on the city shield. In January 2007, the great-grandson of impressionist artist , Alexandre Renoir, presented a painting to the city which depicts the Gardens banyan tree. It is currently on display at the city hall on North Military Trail.

City growth was slow but steady throughout the 1970s and 1980s, as the population has still not reached the predicted 55,000 people envisioned by MacArthur. However, the opening of the 1.3-million-square foot Gardens Mall in 1988 initiated a new wave of development, as did the sell off in 1999 of approximately 5,000 acres (20 km²) in the city by the . Development of this property happened quickly and led to much new growth in the city. The city adopted an Art In Public Places ordinance in 1989 and has amassed an eclectic collection of works. [ [http://www.pbgfl.org/visitor/art/art.asp] ]

The city suffered much damage to its tropical in the hard freezes of 1985 and 1989, but has experienced no freezing temperatures since then. The city was hit by , , and in 2004 and 2005. Much of the city lost power for days at a time after each storm, and many traffic signals and directional signs in the city were destroyed. Many homes and businesses were severely damaged during the first two storms and contractors and construction materials were at a premium. Hundreds of homes were only nearing final repair when Hurricane Wilma hit the following year damaging or destroying many of those completed or ongoing repairs.

Public K-12 primary and secondary schools are administrated by the . Palm Beach Gardens High School and William T. Dwyer are the local s.

The Edward M. Eissey Campus, a of , is located in Palm Beach Gardens. It includes the Eissey Theatre for the Performing Arts.

There were 15,599 households out of which 23.4% had children under the age of 18 living with them, 53.8% were married couples living together, 8.9% had a female householder with no husband present, and 34.5% were non-families. 27.7% of all households were made up of individuals and 10.5% had someone living alone who was 65 years of age or older. The average household size was 2.23 and the average family size was 2.70.

The Palm Beach Gardens Fire Department is the municipal . It operates out of five stations.

The Palm Beach Gardens Medical Center is a in the city owned by .

In December 1987, the last "missing link" of Interstate 95 opened in the city, paving the way for new development immediately to the north. There are three interchanges on I-95 serving the city and fourth is planned at Central Boulevard. The city also is served by two interchanges on the

Public transit is available to the rest of Palm Beach County through the regional commuter bus system . In addition, the of extending the commuter rail system northward with a proposed station near PGA Boulevard north of the current terminus at Mangonia Park. A trolley system is also proposed to serve the newly developed "Downtown" area.

The nearest airports are and , about 17 miles and 61 miles south of Palm Beach Gardens, respectively.