Orange County is a county located in the U.S. state of Florida and is part of the Orlando-Kissimmee-Sanford Metropolitan Statistical Area (MSA). As of 2010 U.S. Census, the county had a population of 1,145,956.[1][2]

Although the seat of government is located in a building in Downtown Orlando, the government declared a region of the county as "Downtown Orange County" in 2005. The region of largely unincorporated land (portions of the northern fringe are annexed by Orlando) encompasses the southern portions of the International Drive and Universal Boulevard corridors. The County Government keeps an office in the area at the North/South Building of the Orange County Convention Center. [1]

The land that is Orange County was part of the first land to emerge from below the Early Oligocene sea 33.9—28.4 million years ago and is known as Orange Island. Orange County's Rock Spring location is a Pleistocene fossil bearing area and has yielded a vast variety of birds and mammals including giant sloth, mammoth, camel, and the Dire Wolf dating around 1.1 million years ago.[3]

In 1821, there were two counties that formed Florida: Escambia to the west and St. Johns to the east. In 1824, the area to the south of St. Johns County became Mosquito County, and Enterprise was named the County Seat. This massive county took up much of Central Florida. Mosquito County was renamed Orange County in 1845 when Florida became a state. Several counties, such as Osceola, Seminole, Lake, and Volusia County, were carved out of Orange County.

Orange County was renamed from Mosquito County for the fruit that constituted the county's main product. At its peak in the early 1970s, some 80,000 acres (320 km²) were planted in citrus in Orange County. A truly impressive sight while driving through the rolling hills of the region were the vast vistas of the dark green foliage of orange trees and the intoxicating scent of the orange blossoms when in bloom. Today, far fewer commercial orange groves remain. The vast majority of groves were destroyed by the devastating freezing temperatures experienced in several severe winters of the early 1980s. The financial setbacks, (not the first in the history of the grove region), was just too much for many growers and many, economically destroyed, just walked away from the land and its outstanding obligations. Others hung on awaiting any opportunities. One of the major land owners and growers in the region was the Tropicana company. They, however, also threw in the towel rather than try to come back again from these seemingly generational decimations. With no realistic avenues for agricultural utilization of this rural land and Florida's continuing strong population growth and its attendant needs, (not the least of which was aided and abetted by the great success of nearby Walt Disney World and Universal Studios Florida), these areas began and continue to be, swallowed up by growing housing developments. However, several packing facilities and wholesalers are still in Orange County. 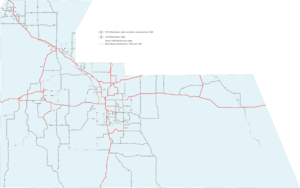 The roads built and planned in the 1926 bond issue, and earlier paved roads.

In the next ten years, the following roads also received a hard surface:

Another bond issue, this time for $7,000,000, was approved by voters on March 23, 1926. These asphalt roads covered almost all parts of the county; most of them are still main roads. There are too many to list here but a map is available.

In 2000 3.9% of Orange County residents identified themselves as being of non-Hispanic West Indian ancestry.[8]

Darden Restaurants, a company that operates many restaurant chains such as Olive Garden, has its headquarters in an unincorporated area in the county, near Orlando.[9]

Orange County is one of the Democratic-leaning counties in Central Florida, with a diverse population of people from around the U.S. and the world. It voted for Barack Obama 59% to 40% in 2008. However they voted for Republicans Richard Crotty and Teresa Jacobs for county mayor, and for Jeb Bush, and Charlie Crist for Governor in the last few elections.

Orange County is a "charter" county, meaning that the county government adopted a charter, and is governed by that charter, in addition to state law. 20 of Florida's 67 counties are charter counties. (http://sunshinereview.org/index.php/Florida_counties)