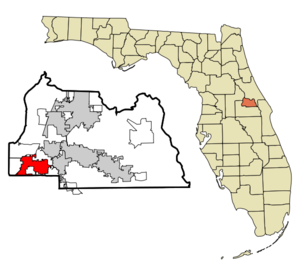 mapsize = 250x200px
map_caption = Location in Seminole County and the state of

There were 18,821 households out of which 24.8% had children under the age of 18 living with them, 37.1% were married couples living together, 12.0% had a female householder with no husband present, and 46.8% were non-families. 36.1% of all households were made up of individuals and 6.7% had someone living alone who was 65 years of age or older. The average household size was 2.17 and the average family size was 2.86.

Cranes Roost Park, Cranes Roost Lake, and the general area on State Road 436 east of Interstate 4 is known as the central area of the city. This is the area that borders Interstate 4 which is the main interstate highway for Central Florida connecting Daytona Beach, Orlando, and Tampa. An outdoor town center was recently opened named 'Uptown Altamonte' which marks the central business district of the city. Cranes Roost at Uptown Altamonte features a cheorographed water fountain show that will entertain people of all ages. The spectacular music, light and water show features classical, swing and contemporary music in a 20 minute performance.

Tuesdays jumpstart the week with Karaoke Madness featuring DJ Gregg, where the entire family can perform their favorite tunes and enjoy some time together.

Thursdays mean Streetmosphere, Uptown Altamonte's version of the circus, as performers stage two shows of mime, juggling, balancing and magic in the Eddie Rose Amphitheater at 7:30pm and 8:30pm.

Monthly events include a Car Cruise with live 50's and 60's music as well as beautiful and classic cars and Cranes Comedy, on the fourth Tuesday of every month, with the best local and national comedy acts at the Eddie Rose Amphitheater.

During recent years Altamonte Springs has been a host city to several local special events in the Orlando area including Red, Hot, & Boom, a major annual firework festival that takes place every July 3rd in celebration of Independence Day. The Red, Hot, & Boom event draws over 100,000 local residents and visitors annually from the entire Central Florida area.