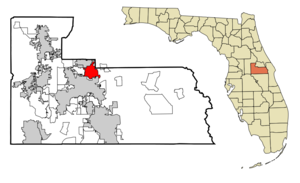 mapsize = 250x200px
map_caption = Location in Orange County and the state of

Winter Park is a city in Orange County, , . The population was 24,090 at the 2000 census. According to the 's 2006 estimates, the city had a population of 28,083. The city is home to , and the , which houses the largest collection of Tiffany glass on Earth. Winter Park enjoys more parkspace per capita than any other city in Florida.

Winter Park was founded as a resort destination by wealthy industrialists before the turn of the 20th century. It is recognized as the first centrally planned community in Florida; its main street includes not only public civic buildings and retail, but also art galleries, a private liberal arts college, museums, a park, a train station, a golf course country club, a historic cemetery, and a beach and boat launch. Winter Park is celebrated for a sense of place and history, uncommon to many parts of . Many structures are more than 100 years old. The scenic "Olde Winter Park" area is punctuated by small, winding brick streets, and a canopy of old Southern Live Oak and s, draped with . The city draws thousands of visitors to annual festivals including the Bach Festival, the nationally ranked Sidewalk Art Festival, and the Winter Park Concours d'Elegance.

The site was first inhabited by Europeans in 1858, when David Mizell Jr. bought an eight-acre homestead between Lakes Virginia, Mizell and Berry. A settlement, called Lake View by the inhabitants, grew up around Mizell's plot. It got a post office and a new name -- Osceola -- in 1870.

The area did not develop rapidly until 1880, when a track connecting Orlando and Sanford was laid a few miles west of Osceola. Shortly afterwards, Loring Chase came to Orange County from Chicago to recuperate from a . In his travels, he discovered the pretty group of lakes just east of the railbed. He enlisted a wealthy , Oliver E. Chapman, and they assembled a very large tract of land, upon which they planned the town of Winter Park. Over the next four years they plotted the town, opened streets, built a town hall and a store, planted orange trees, and required all buildings to meet stylistic and architectural standards. They promoted it heavily. [ Facts taken from a copy of the original Seminole Hotel promotional brochure.] During this time, the railroad constructed a depot (1882), connected to Osceola by a dirt road.

In 1885, a group of businessmen started the and incorporated it with the , Chase and Chapman sold the town to the new company. In a land bubble characteristic of Florida history, land prices soared from less than $2 per acre to over $200, with at least one sale recorded at $300 per acre.

In 1885, the Congregational Assembly of Florida started , the state's first four-year college. The following year saw the opening of The Seminole Hotel on Lake Osceola, a grand resort complete with the luxuries of the day: s, , a , a formal dining room, a , and long covered porches. It was the largest hotel in Florida and President called it "the prettiest place I have seen in Florida" [http://www.wppl.org/wphistory/FirstSeminoleHotel/AerialViewOfSeminoleHotel.pdf] Presidents and visited The Seminole Hotel in the following four years, cementing the place of both hotel and town as a fashionable .

In May of 1981, during a period of record-low water levels in Florida's , a massive opened up near the corner of Denning Drive and Fairbanks Avenue. In a single day the hole widened to convert|320|ft|m and to a depth of convert|90|ft|m, destroying an import car dealership, a public pool, and large portions of Denning Drive. In addition, the sinkhole "ate" an entire two-story home. The deepest part of the limestone cavern must have been directly under the house as not even the peak of the roof of the house could be seen after the sinkhole stabilized. Fortunately, no one was in the house at the time the cavern roof collapsed. City managed to stabilize the sinkhole, which drew national attention and became a popular tourist attraction during the summer of 1981. A carnival-like atmosphere arose around the area, with vendors selling food, balloons, and t-shirts to visitors. Eventually the novelty wore off as the city repaired the damage and turned the sinkhole into man-made Lake Rose, seen in [http://maps.google.com/maps?ie=UTF8&om=1&z=18&ll=28.593867,-81.361495&spn=0.002327,0.005032&t=h this] aerial view.

Famous guests included , , , , , , Langford winter resident , and President and his wife, First Lady who celebrated their 40th wedding anniversary there.

The Langford was toasted in one memorable last late night party in late 1999, closed, and was demolished. A portion of the former Langford Property (as of late 2006) has been developed into luxury mid-rise condominiums. The remaining parcel is now vacant and for sale.

An orange grove, known as The Temple Grove, stood on the south side of Palmer Avenue just east of Temple Drive. The temple orange was grown on the old Wyeth grove on Palmer Avenue (later Temple Grove) owned at the time by Louis A. Hakes, whose son was the first to notify Temple of the different quality of the new orange. The orange was introduced and cataloged by Buckeye Nursery in 1917, the year W. C. Temple died. Myron E. Gillett and his son D. Collins Gillett later went on to plant the largest Temple orange grove in the world (convert|5000|acre) in , Florida in 1922.

The city is traversed by the old Orlando-Oviedo ("Dinky Line") railroad bed, which until the 1960s had a stop at Lake Virginia/Rollins College at the city park now known as Dinky Dock. Much of this right of way has been converted to a rail-to-trail pedestrian/biking path - in the form of the Cady Way Trail, which leads from Cady Way Park toward the Baldwin Park neighborhood and downtown Orlando, and in the opposite direction to Oviedo and beyond (via the Florida trail), thanks to a new pedestrian bridge spanning Semoran Boulevard (SR 436) in Orange County.

Currently, operates a rail line through Winter Park on the former , with an Station in downtown's historic Central Park.

Due to its close proximity of Orlando, Winter Park is a city which many commuters traverse to access downtown Orlando. These commuters come from outlying suburban areas such as, Oviedo, Winter Springs, Maitland, Altamonte Springs and Casselberry. Winter Park's municipal government has combated speeding and aggressive driving in its downtown core and residential areas by lowering speed limits to 20 MPH in some areas, adding textured traffic-calming brick roads, and aggressively enforcing the law within the city limits. These measures have contributed to some traffic congestion, but preserve the quality of life for residents and encourage pass-thru commuters to seek alternate, more appropriate high-speed routes to downtown (such as SR436/Semoran Blvd, Lake Howell Road, US17-92/Orlando Ave, Interstate 4, and the 408/East West Expressway and 417/Greeneway toll roads).Fact|date=February 2007

There were 10,722 households out of which 21.5% had children under the age of 18 living with them, 43.2% were married couples living together, 9.0% had a female householder with no husband present, and 45.3% were non-families. 38.4% of all households were made up of individuals and 18.6% had someone living alone who was 65 years of age or older. The average household size was 2.10 and the average family size was 2.80.

Due to its heavy emphasis on the arts and its scenic charm, Winter Park has traditionally attracted an eclectic mix of residents - wealthy Northerners, patrons of the arts, Old Florida families, artists, students, vacationers and idealists.