Volusia County is a county located in the state of Florida. The U.S. Census Bureau 2010 official county's population was 494,593 [1]. Its county seat is DeLand[1], and its most populous city is currently Deltona.

Volusia County is coextensive with the Deltona-Daytona Beach-Ormond Beach-New Smyrna Beach, Florida Metropolitan Statistical Area, a metropolitan statistical area designated by the Office of Management and Budget for statistical purposes and used by the United States Census Bureau and other agencies. It is the 103rd-largest in population in the United States as of the 2010 Census estimate.

Volusia County is traversed from north to south by the important highways Interstate 95 and U.S. Route 1. It also sits at the northeastern end of the Interstate 4, where it merges with Interstate 95.

Volusia County was named after the then-largest-community, Volusia, when the Florida legislature divided Orange County on December 29, 1854. At the time, Volusia County had as few as 600 residents.[2]

The origins of the word "Volusia" are unclear, though there are several theories:

The land area of present day Volusia County was inhabited by the indigenous Timucua, and Mayaca people . Neither group exists today as distinct racial entities, having been decimated by war and disease after contact with European settlers. Evidence of their habitation can still be seen in various areas of Volusia County such as the large shell middens at Tomoka State Park.

During the British occupation of Florida, a failed colony was started in southeast Volusia County by Andrew Turnbull, known as New Smyrna. This colony was connected to St. Augustine, the capital of East Florida, via the Kings Road. After the failure of the colony the settlers, many of Minorcan heritage made the 70-mile (110 km) journey to live in St. Augustine.

The Seminole indians, descendants of the Creek tribe of Alabama and Georgia who resisted forced relocation to Indian Territory also camped in various parts of Volusia County. During the Second Seminole War (1836–1842) a large sugar plantation in what is today the city of Daytona Beach was burned by the Seminole.

On the east shore of the St. Johns River in Volusia, in present day Debary, General Winfield Scott established a fort/depot in 1836 named Fort Florida. 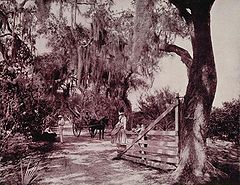 Avenue of Moss-Covered Oaks, Near Ormond, Florida -- an 1893 duotone print

Volusia County is bordered on the west by the St. Johns River and Lake Monroe, and by the Atlantic Ocean to the east. Roughly the size of Rhode Island, Volusia is situated 50 miles (80 km) northeast of Orlando, 60 miles (97 km) north of the Kennedy Space Center, and 89 miles (143 km) south of Jacksonville.

The Volusia County Government divides the county into three regions. This parallels the three calling regions used by BellSouth, the regional phone company:

East Volusia - also known as the Greater Daytona Beach Area, or the Halifax Area (named for the Halifax River which runs through the area), this region includes the cities of Daytona Beach, Daytona Beach Shores, Holly Hill, Ormond Beach, Ponce Inlet, Port Orange, and South Daytona; and the surrounding unincorporated areas close to these cities.

Under Volusia County's council-manager form of government, voters elect a county council which consists of seven members who serve four-year terms. Five are elected by district, the county chair and at-large representative are elected county-wide.

The county council establish ordinances and policies for the county. It also reviews and approves the county budget annually. The commission appoints a county manager, who carries out the will of the commission and handles day-to-day business.

The following are considered state officials but are elected and paid by the county:

The county has centralized most county courts in DeLand which try a variety of cases including felonies, misdemeanors, traffic, and domestic. An elected prosecutor tries cases for the public. Defendants can be represented through the auspices of the office of the elected public defender.

The County elects a sheriff, immediately responsible to the courts but also to the state for the enforcement of state laws. Volusia county sheriff's deputies provide law enforcement to the unincorporated areas of Volusia County, as well as assisting in the various municipal police departments such as the Daytona Beach Police Department

Many volunteers work alongside the paid professionals. Included are Citizen Observer Program (C.O.P.). C.O.P. volunteers work under the direction of the county sheriff and play a part in the county's policing operations.

The Volusia County Branch Jail is a modern facility, located on Highway US-92 (International Speedway Boulevard), approximately halfway between DeLand and Daytona Beach. The county jail retains prisoners who have been sentenced to a year or less. Longer sentences must be served in state prisons.

The county centrally controls 16 libraries with Deland and Daytona (City Island) being the two largest libraries. Collections included 869,491 books, 83,943 videos, 58,784 audio materials, 2,051 magazines and newspapers, over 100,000 government documents and 51 licensed databases. Personal computers for public use are hooked up on broadband in all libraries. An estimated 230,000 Volusia County residents have library cards. One library card is valid at all locations, and materials are loaned between locations through a daily courier service and outside the libraries via Inter-Library Loan. Library cards are free for all Volusia County residents.

The overall Gross Metro Product (GMP) for Volusia County economy increased from $12.98-billion in 2005 to $13.69-billion in 2006; a $709.9-million increase. The GMP is an annual measurement of the total economic output and sales of goods and services provided within the Metropolitan Statistical Area (MSA) that comprises all of Volusia County and its 16 cities. A GMP of $13.69-billion represents a significant circulation of new capital resources in an economy populated by just over 500,000 residents.

Local consumer confidence and a continued immigration of an estimated 28,800 new residents, new capital investments for new construction exceeding $1.11-billion and the steady growth of professional and health care services continued to drive much of the County’s economic viability.

Volusia County’s manufacturing sector maintained a steady and stable position within the local economy contrary to the declining trends being experienced elsewhere within the State of Florida. The overall number of manufacturers present within the county increased to over 430 in 2006 and accounted for a large portion of the county’s GMP. Manufacturing maintains one of the highest of all average wage levels within the county and generates a higher rate of circulation of economic impact than any other business sector that comprises the local economy.

As of August 2007, Volusia County has 16 incorporated cities and towns. 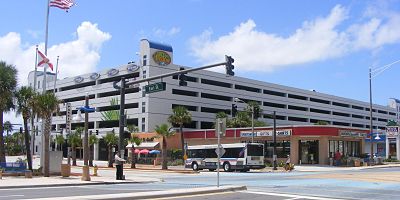 The Volusia County Parking Garage in Daytona Beach provides a place for visitors to park and walk around.
See also: List of county roads in Volusia County, Florida

Volusia County Public Transit System (VOTRAN) is the name of the local Volusia County bus service. It is an inexpensive way to get around and is handicap accessible. The buses offer service throughout the county, Monday through Saturday, from 7 a.m. to 7 p.m. Some limited bus routes are offered in East Volusia in the evenings and on Sundays. Buses travel to most sites and places of interest. The cost is $1.25 per trip, $3.00 for a one-day bus pass, or $40 for a 31-day pass (valid for all VOTRAN routes). There is also a VOTRAN transfer station (Intermodal Transit Facility - ITF) located inside the Volusia County Parking Garage in Daytona Beach.

Service between Volusia County and Orlando is provided by LYNX from Orange City, serving Heathrow and Downtown Orlando via Interstate 4.[12] The LYNX route operates Monday through Friday with three trips in each direction. The regular fare is $3.50 per trip or $80 for a monthly pass.

Service to Orlando is planned to be expanded in the form of SunRail, a commuter rail running from Volusia to Osceola county with the initial phase starting in 2013. In the initial phase, service will only extend to Debary. It is planned to extend this to also include the DeLand Amtrak station in 2015.[13][14]

Public primary and secondary education is handled by Volusia County Schools. Some of the larger private schools include Father Lopez Catholic High School.

The channel 2 television station in the area is allocated to Daytona Beach - Orlando, and its transmission tower is located midway between those two. Otherwise, Volusia County is served by the major TV broadcasting stations in Orlando and Orange County, Florida.