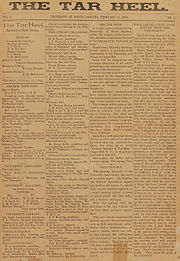 Front page of the first edition of The Daily Tar Heel a student newspaper of University of North Carolina from 1892. 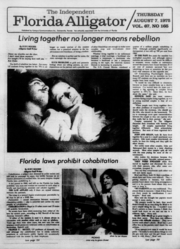 Front page of the Independent Florida Alligator a student newspaper of the University of Florida from 1975.

A student newspaper is a newspaper run by students of a university, high school, middle school, or other school. These papers traditionally cover local and, primarily, school or university news. Working for one's high school newspaper is sometimes an extracurricular activity, but often is integrated with offered journalism classes. Some schools have both a basic class in which students learn about newspapers, and a class that produces the school's newspaper.

Tinker v. Des Moines concerns a group of students who wanted to wear black armbands to school in 1965 to protest United States involvement in Vietnam. After school officials heard about the planned silent protest, they suspended the students involved. A few of the students involved sued and the Supreme Court sided with the students, saying that provided that these speech acts did not distract themselves or others from academic work, the real purpose of the school, then students were free to wear and say want they liked in school. This is considered the benchmark case in issues of student free speech and contains the famous phrase “students do not shed their constitutional rights at the schoolhouse gate."[1]

This court case, heard by the United States Supreme Court in 1987 concerned a public school newspaper that attempted to print two controversial stories about issues of teen pregnancy and divorced families. It was the custom of the principal to look over the proposed paper before publication. With little time left before the publication deadline, the principal decided that the two stories, though names had been changed to protect the stories' subjects, were inappropriate for the paper's younger readers and the paper was printed without the offending stories. The students filed suit, but the Supreme Court stood by the principals ruling, that, because of time constraints, the only proper course of action was to not print the stories. It was decided that the students 1st Amendment rights had not been infringed. This case is often cited by high schools and universities to support the custom of prior review.[2]

Kincaid v Gibson was decided by the United States Supreme Court in 2001 and concerned school officials at Kentucky State University who confiscated yearbooks from 1992-1994 citing distasteful coloring and lack of control of content. The court ruled in favor of the students, forcing school officials to stop all similar censorship and retroactively distribute the offending yearbooks. This case is sometimes cited to prove that the law applies to school publications at high schools and colleges.[3]

Hazelwood, for example, does not say administrators must review or censor their papers before publication. In fact, journalism education organizations, like the Journalism Education Association, argue that prior review has no legitimate educational merit and is only a tool leading to censorship.

Under certain limited conditions and situations presented by Hazelwood, school administrators may be permitted prior review of (mostly high school) student publications.

Until June 2005, the Hazelwood standard was not considered to apply to public college and university newspapers, a decision most recently affirmed in the 2001 appeals court decision in Kincaid v. Gibson. However, in June 2005, the 7th Circuit Court of Appeals ruled, in Hosty v. Carter, that the Hazelwood standard could apply to student publications that were not "designated public forums," and in February 2006 the Supreme Court declined to hear the students' appeal. At this time, the Hosty decision applies only in the states of Illinois, Indiana and Wisconsin.

In response to the Kincaid decision, the California State Legislature passed AB 2581, which extended existing state-level statutory protection of high school student journalists to college and university students.[1] The bill was signed into law by Governor Arnold Schwarzenegger and took effect on January 1, 2007.

Some states have laws which enhance the U.S. Constitution in protecting student expression. For a more detailed review of state and national student press rights, see the Student Press Law Center's site here.

University administrations have learned to get around constitutional protections and effectively diminish critical student newspapers by following the example of former Boston University President John Silber, who on the advice of Harvard Law School Professor Alan Dershowitz, eliminated all funding for student newspapers in the 1970s in an attempt to suppress on-campus criticism. Silber's policy went so far as to ban student organizations funded by the university from placing advertisements in the student press. With his hands-off policy, Silber was able to eliminate the independence of The Daily News and financially crippled the more-radical b.u. exposure. The exposure sued Silber and the University for infringement of their First Amendment rights, but the courts of the Commonwealth of Massachusetts eventually dismissed their case.

Issues of diversity in student newspapers

A troublesome development in student newspapers of the United States is the lack of editorial diversity displayed. Studies by the Journal of Blacks in Higher Education(JBHE) focusing on African American students have found that as few as 2.6% of editors of all student newspapers are of African-American descent, with other minorities showing similar trending. These numbers are not much better at schools with credited journalism schools. In these institutions only 4.4% of editors are of African American descent. Both of these percentages are significantly below the percentage of population African- Americans make up in the total United States. Such skewed demographics in these publications could result in newspapers that only reflect the outlooks and values of a particular segment of the student population, doing a disservice to each campus community. It is unclear what options there are to rectify this situation. The JBHE does not suggest any type of affirmative action program for student publications at this point in time.[4]

Due to the rise in adoption of computers and Internet, many high schools and colleges have begun offering online editions of their publications, as well as printed copies. As printed student publications become more and more scarce and student publications move online to best fit the news needs of today's students, student newspapers will run into several issues. One of these issues is what is called the “daily me.” Coined by Cass Sunstein in his book “Republic.com” the “daily me” is the current trend of online readers looking for personalized information providers. In this way the reader deals with only the subjects they wish to deal with. In this way readers are not inconvenienced by material they have no interest in and can personalize an information product themselves, providing added value to both themselves and the provider. However, some believe this trend may not be the best for society, who is now faced with a public that chooses how well to be informed. On a campus paper, this trend will likely manifest itself in the increased number of “hits” to the common “sports” and “opinion” sections of the paper, while hard news sections go un-noticed. This new type of print culture could possibly result in drastic formatting and content changes for student newspapers.[5] Another difficulty with the emergence of online student publication is the increase in demand for new content. While an update once a day or even once a week was once acceptable for a student publication, real time information resources will soon be demanded by students who grew up with constant updates of news coverage. This shift in content demand will require more effort and more time by the student newspaper staff, who as students are already time committed.

At the University of Central Florida, an online student website was created by an alumni in 2009 to compete with the Central Florida Future, UCF's independent print newspaper. Both news sources seem to target similar advertisers, so the question of whether online or print newspapers will be the future at the university level, could be answered in Orlando, depending on which becomes dominate.

Gair rhydd, the student paper at Cardiff University, courted controversy when, on February 4, 2006, it reproduced the cartoons, originally printed in Jyllands-Posten, depicting the Prophet Muhammad. The issue was withdrawn from publication within a day of being released, the editor and two other student journalists were suspended, and a public apology was published in the next issue.

In the same month, two editors of the Daily Illini, the independent student newspaper of the University of Illinois, were suspended after deciding to publish six of the twelve cartoons.

However, student publications took a lead role in reprinting the Muhammad cartoons, often accompanying them with explanatory editorials. No fewer than 16 student newspapers and magazines in the United States, and a handful in other countries, ran one or more of the caricatures.

Many student newspapers in Canada are independent from their universities and student unions. Such autonomous papers are funded by student fees won by referendums, as well as advertising, and are run by their staffs, with no faculty input.

About 70 of Canada's student newspapers belong to a co-operative and newswire service called the Canadian University Press, which holds conferences, has correspondents across the country, is run democratically by its member papers, and fosters a sense of community among Canadian student journalists.

Well-known Canadian student newspapers include The Cord Weekly (Wilfrid Laurier University), ""The Prince Arthur Herald"" (National), Imprint (University of Waterloo), The Martlet, The Ubyssey and The Peak in British Columbia; The Gateway in Alberta; The Sheaf in Saskatchewan; The Manitoban in Manitoba; The Charlatan, The Fulcrum, The Varsity(University of Toronto), The Eyeopener (Ryerson University), Arthur (Trent University), The Gazette (the University of Western Ontario) and the Excalibur (York University) in Ontario; The Link, The Concordian (Concordia University, Montreal), The McGill Daily, The Campus (Bishop's University) and McGill Tribune in Quebec; The Brunswickan in New Brunswick; The Dalhousie Gazette in Nova Scotia, The Muse in Newfoundland and Labrador, and The Queen's Journal (Queen's University).

The oldest, continually published student newspapers in Canada are The Varsity (1880), The Queen's Journal (1873), and The Dalhousie Gazette (1868).

Student press in the United Kingdom

In 2003, The National Student, the UK's first independent national student newspaper was launched. Scotcampus a similar publication based in Scotland was founded in 2001.

Most student newspapers in Ireland are published by the local students union in their college; some of these (such as The University Observer) are given editorial independence from the SU. A small number, including Trinity News and UCD's College Tribune, are both financially and editorially independent.

University student newspapers in the Australia are usually independent of university administration yet are connected with or run by the student representative organisation operating at the campus. Editors tend to be elected by the student body on a separate ticket to other student representatives and are paid an honorarium, although some student organisations have been known to employ unelected staff to coordinate the production of the newspaper. For a list of student newspapers in Australia see * List of University Newspapers

Australian student newspapers have courted controversy since their inception. One of the more notorious of these controversies involved the publication of an article which allegedly incited readers to shoplift. The July edition of the magazine was banned by the Office of Film and Lifterature Classication following a campaign by conservative talkback radio hosts and other media to have the material banned. The four editors of the July 1995 edition of La Trobe University student magazine Rabelais were subsequently charged with publishing, distributing and depositing an objectionable publication. An objectional publication was defined in this case, as one that incites criminal activity.[2] The editors lodged an appeal, which led to a protracted four-year court case. The appeal was eventually defeated by the full bench of the Federal Court, who refused the editors application to appeal to the High Court of Australia.[3] The charges were eventually dropped in March 1999.