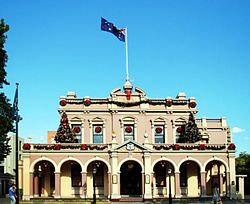 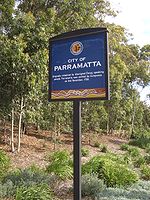 The City of Parramatta is a Local Government Area in western Sydney, in the state of New South Wales, Australia.

In 1948 Ermington-Rydalmere, Dundas, Granville and Parramatta councils were amalgamated.

City of Parramatta is the 23rd most populated city council in Australia.

Suburbs in the City of Parramatta are:

Parramatta City Council is composed of fifteen councillors elected proportionally. The area is divided into five wards, each electing three councillors. The mayor is not directly elected.[2] The current makeup of the council is as follows:[2]