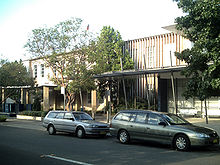 The Council Chambers in Merrylands

Holroyd is a Local Government Area and suburb of Sydney, New South Wales, Australia, located in the Western Sydney region. Originally known as the Municipality of Prospect and Sherwood it was incorporated in February 1872, in 1927 it was renamed the Municipality of Holroyd after Arthur Holroyd, the first mayor. In December 1990 was declared City of Holroyd.

Holroyd City contains a large number of 19th Century houses throughout the area.[2]

Suburbs in the City of Holroyd are:

Holroyd City Council is composed of twelve councillors elected proportionally. The city is divided into four wards, each electing three councillors. The mayor is not directly elected.[3] The current makeup of the council is as follows:[3]

Holroyd Youth Services (HYS) was incorporated as a service for young people in 1988. The premises in which HYS operate are provided by Holroyd City Council and staff funding is provided by the Department of Community Services.[4]