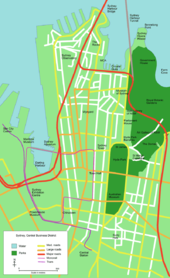 Map of the CBD

The Sydney central business district (CBD and popularly referred to as the City) is the main commercial centre of Sydney, New South Wales, Australia. It extends southwards for about 3 kilometres from Sydney Cove, the point of first European settlement. Its north–south axis runs from Circular Quay in the north to Central railway station in the south. Its east–west axis runs from a chain of parkland that includes Hyde Park, The Domain, Royal Botanic Gardens and Farm Cove on Sydney Harbour in the east; to Darling Harbour and the Western Distributor in the west.

The Sydney central business district is also sometimes used loosely to encompass the surrounding suburbs such as Pyrmont and Woolloomooloo.

The Sydney CBD is an area of very densely concentrated skyscrapers and other buildings, interspersed by several parks such as Hyde Park, The Domain, Royal Botanic Gardens and Wynyard Park. George Street is the Sydney CBD's main north-south thoroughfare. The streets run on a slightly warped grid pattern in the southern CBD, but in the older northern CBD the streets form several intersecting grids, reflecting their placement in relation to the prevailing breeze and orientation to Circular Quay in early settlement. The CBD runs along two ridge lines below Macquarie Street and York Streets. Between these ridges is Pitt Street, running close to the course of the original Tank Stream (now tunnelled). Bridge Street, took its name from the bridge running east-west that once crossed this stream. Pitt Street is the retail heart of the city which includes the Pitt Street Mall and the Sydney Tower. Macquarie Street is a historic precinct that houses such buildings as the State Parliament House and the Supreme Court of New South Wales.

Administratively, the Sydney CBD falls under the authority of the local government area of the City of Sydney.[2] The New South Wales state government also has authority over some aspects of the CBD, in particular through the Sydney Harbour Foreshore Authority. This is a body charged with managing development of certain foreshore areas of Sydney.

The Sydney CBD contains many of Australia’s tallest skyscrapers, including Governor Phillip Tower, MLC Centre and World Tower, the latter consisting predominantly of apartments. The tallest structure is Sydney Tower at 309 metres, however planning restrictions limit future developments to a height of 235 metres due to air traffic.

The Sydney CBD is home to some of the largest Australian companies, as well as serving as an Asia-Pacific headquarters for many large international companies. The financial services industry in particular occupies much of the available office space, with companies such as the Commonwealth Bank of Australia, Citibank, Deutsche Bank, Macquarie Bank, AMP Limited, Insurance Australia Group, Polltraxx Music Group Australia, AON, Marsh, Allianz, HSBC, AXA and ABN Amro all having offices. 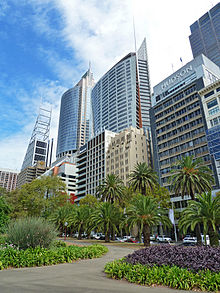 Most business headquarters in Sydney are located in the CBD

There is a large concentration of cultural institutions within the CBD including: the Museum of Sydney, the State Library of New South Wales, the Customs House branch of the City of Sydney Library, the Theatre Royal, the City Recital Hall and the Japan Foundation.

Many other cultural institutions are located at the edge of the CBD, such as: the Sydney Opera House and the Museum of Contemporary Art to the north, the Australian Museum and the Art Gallery of New South Wales to the east, the Powerhouse Museum to the west, and the Haymarket branch of the City of Sydney Library to the south.

Every January, the city celebrates with the Sydney Festival. There are art, music and dance exhibitions at indoor and outdoor venues. Australian and International theatre during the month is also featured, including Aboriginal, and Contemporary. Many of these events are free.

The Sydney Film Festival is an international event organised every year in June at various venues across the CBD.

Sydney boasts a lively cafe culture which is complemented by a club and bar scene distributed throughout the CBD and concentrated in a couple of locations such as Darling Harbour.[citation needed]