Electoral district of Sydney
This article is about the New South Wales state electorate. For the Australian federal electorate, see Division of Sydney. 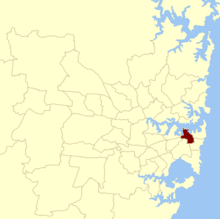 It is currently represented by Clover Moore, who is also the Lord Mayor of Sydney.

In the first Parliament of the New South Wales colony, 1856-57, there was a four-member electoral district called Sydney City with voters casting four votes, and the four leading candidates being elected. In 1859, it was replaced by the four-member districts of East Sydney and West Sydney. In 1894, the three four-member districts of East Sydney, West Sydney and South Sydney (created in 1880) were replaced by ten single-member districts with "Sydney" in their title: Sydney-Belmore, Sydney-Bligh, Sydney-Cook, Sydney-Denison, Sydney-Fitzroy, Sydney-Flinders, Sydney-Gipps, Sydney-King, Sydney-Lang, Sydney-Phillip and Sydney-Pyrmont. From 1904, these electorates were renamed or abolished.

Sydney was recreated for the 2007 election, largely replacing the abolished district of Bligh.

See also: Electoral results for the district of Sydney