Barrington Hills is a village located about 40 miles (64 km) northwest of Chicago in the U.S. state of Illinois. It straddles approximately 29 square miles (75 km2) over four counties, Cook, Kane, Lake, and McHenry. The population was 4,209 at the 2010 census.[3] The Village of Barrington Hills was incorporated in 1957.

The rural-suburban area is part of the greater Barrington area and many affluent residents live there on large estates within commuting distance of Chicago. There is a minimum 5-acre (2.0 ha) zoning restriction on building houses and both farming and horse raising are allowed.

Homes are on individual septic system and water wells. The Zoning Ordinance of the Village was adopted in 1963 but the existence of equestrian farms predate the Village by decades.

The Village is home to Hill 'N Dale Farms, belonging to Richard L. Duchossois, owner of the Arlington Park racetrack, Bill McGinley's Horizon Farm and Fitzgerald's Bank Note Farm. The community's identification with horses can be seen in names like Broncos and Colts for school teams, stores catering to saddlery and riding outfits, and subdivisions with street names such as Steeplechase and Surrey Court.

Good farmland and abundant water supplies attracted settlers Jesse Miller and William Van Orsdal in 1834. In the early 1840s, other farm families arrived, including German, English, and Irish immigrants, and formed a town near present-day Sutton Road and Illinois Route 68. Initially called Miller's Grove, the community was later named Barrington Center.[4][5] In August 1853, Otto Helm purchased 40 acres (16 ha) of land along a roadway that still bears his family name. The family names of other earlier settlers continue to be used for Bateman, Hart, Haeger's, Hawley and Otis Roads. Farmers brought their crops to nearby markets on the Fox River in East Dundee. By the late nineteenth century, dairy farmers supplied a local cheese factory.

Barrington Center Church was built in 1853 by the Barrington Methodist Episcopal Society, and it was used as an army recruiting station during the American Civil War.[6] A memorial plaque outside the church lists 91 area residents - one woman and 90 men - who served in the Civil War.[4] Since the 1980s, the church building has been used by a Korean congregation, the New Friends Wesleyan Church.

In 1860, about 18 immigrant families of Czech ancestry settled along the east side of the Fox River, near the future site of Fox River Grove. In 1867, land was purchased at the southwest corner of Church and River - Algonquin Roads and construction was started on St. John Nepomucene Chapel named after the patron saint of Bohemia. It was completed in 1873 and still survives today in Barrington Hills. The chapel was never served by its own priest, and currently services are scheduled only once a year. The chapel and its cemetery are owned by the St. John Nepomucene Catholic Cemetery Association, making it the only privately-owned Catholic chapel and cemetery in the Rockford Diocese.[4][7]

Industry came to the area in the 1890s, when the American Malleable Iron Company built a plant on the northern fringe of Barrington Hills along U.S. Highway 14. The company hired hundreds of Hungarian workers and constructed a residential community for their workers which they called Chicago Highlands. The foundry closed in 1903.

Starting about 1900, business executives from Chicago, many of whom were tied to the railroad industry, purchased the rolling farms and subdivided them into large summer estates. One such individual was Spencer C. Otis, who by 1910 is credited with purchasing 1,000 acres (405 ha) of farmland along what was then Goose Lake Road but is now known as Otis Road and creating Hawthorne Farm. Otis was a "gentleman farmer" of the era. He worked in Chicago commerce, but his hobby was dairy farming on his large country estate. Several of his business associates, including George E. Van Hagen, also built large estates in the area and ran their summer homes as year-round dairy farms.

In 1921, the Barrington Hills Country Club, with its eighteen-hole course, was established on 200 acres (81 ha) of unfarmable land between County Line Road, Oak Knoll Road, and Northwest Highway. The land was donated by three of the club's early founders: H. Stillson Hart, who owned the farmstead known as Hart Hills just to the east of the club; George E. Van Hagen of Wakefield Farm, who owned the land just to the west of the club; and J.R. Cardwell, whose Oak Knoll Farm swelled along the winding Oak Knoll Road on the club's northern end. Van Hagen became the club's first president. Noted Chicago architect Robert Work, who was associated with David Adler, designed the first clubhouse, which was opened in 1926 and burned to the ground in 1930. Work designed the second clubhouse as well, which opened in 1931 and still stands today.[8] 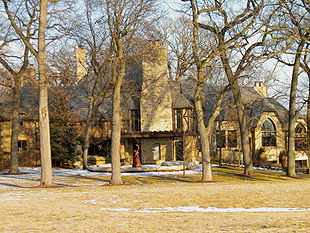 The Grigsby Estate is on the National Register of Historic Places in Lake County.

Eventually, land use in Barrington Hills changed away from agriculture toward horse breeding and riding. By the 1920s, residents began marking bridle paths. The Fox River Valley Hunt Club, founded in the late 1930s, helped continue the development of trails which used both private property and forest preserve land. By the late 1980s, over 70 miles (110 km) of paths were in use.

Barrington Hills incorporated in 1957, composed of land only in the northwest corner of Cook County, and expanded over the next five years to its approximate configuration of today. In 1959, areas in McHenry and Lake Counties joined the village and in 1962 the Village of Middlebury in Kane County was annexed. With the incorporation of Middlebury, the Village acquired its first building being a single room school house converted into a police station.[5] The current Village Hall was constructed in 1974 with a substantial addition in 1993. The building hosts the Police Dispatch center, administrative offices and public meeting room. A Fire Station was constructed in 1994 on the grounds.[9] The only public school located in the village is Countryside Elementary School, with about 500 students, in grades K-5, in the Barrington Community Unit School District 220. Older students attend the nearby Barrington High School. Portions of the village are also within CUSD 300. Some families send their children to Elgin Academy.

According to the United States Census Bureau, the village has a total area of 28.4 square miles (74 km2), of which, 27.88 square miles (72.2 km2) of it is land and 0.52 square miles (1.3 km2) of it (1.83%) is water. The Village is located within the Fox River watershed of the greater Illinois River waterway. There is about 1,700 feet (520 m) of shoreline along the east bank of the Fox River. Locally there are two perennial stream courses known to the west as Spring Creek and to the east as Flint Creek. Over the years, Flint Creek has been impounded such that along its course in the Cook County portion of the Village are substantial lakes with such names as Hawley, Hawthorne, and Keene.

Forest preserves cover 6,000 acres (2,400 ha) (42%) of the village area. The largest is the Spring Creek Nature Preserve, which measures 4,000 acres (1,600 ha) of prairie, swamp, woods, streams and lakes. Another is the Crab Tree Nature Preserve and Helms Woods. The latter is attributed to be the location for the White Fringe Prairie Orchid which is a threatened plant species.

Into the 1990s, farmers still worked about 3,000 acres (1,200 ha) of land. Residential properties of over 1-acre (0.40 ha) covered 30 percent. There is no downtown center, but the village has a small shopping strip along Route 14. With a population of 3,915 in 2000, Barrington Hills has kept its rural flavor as industrial and commercial development has sprung up around its borders.[5]

The village is bordered on the west by East Dundee, Carpentersville, and Algonquin; on the north by Fox River Grove, and Lake Barrington; on the east by Barrington, Inverness, and to the south and southeast by South Barrington, and Hoffman Estates.

There were 1,381 households out of which 33.6% had children under the age of 18 living with them, 78.9% were married couples living together, 3.5% had a female householder with no husband present, and 15.4% were non-families. 12.5% of all households were made up of individuals and 5.3% had someone living alone who was 65 years of age or older. The average household size was 2.83 and the average family size was 3.10.

The village ranks 87th on the list of highest-income places in the United States with a population over 1,000, with nearby North Barrington, South Barrington, and Inverness also making the list.