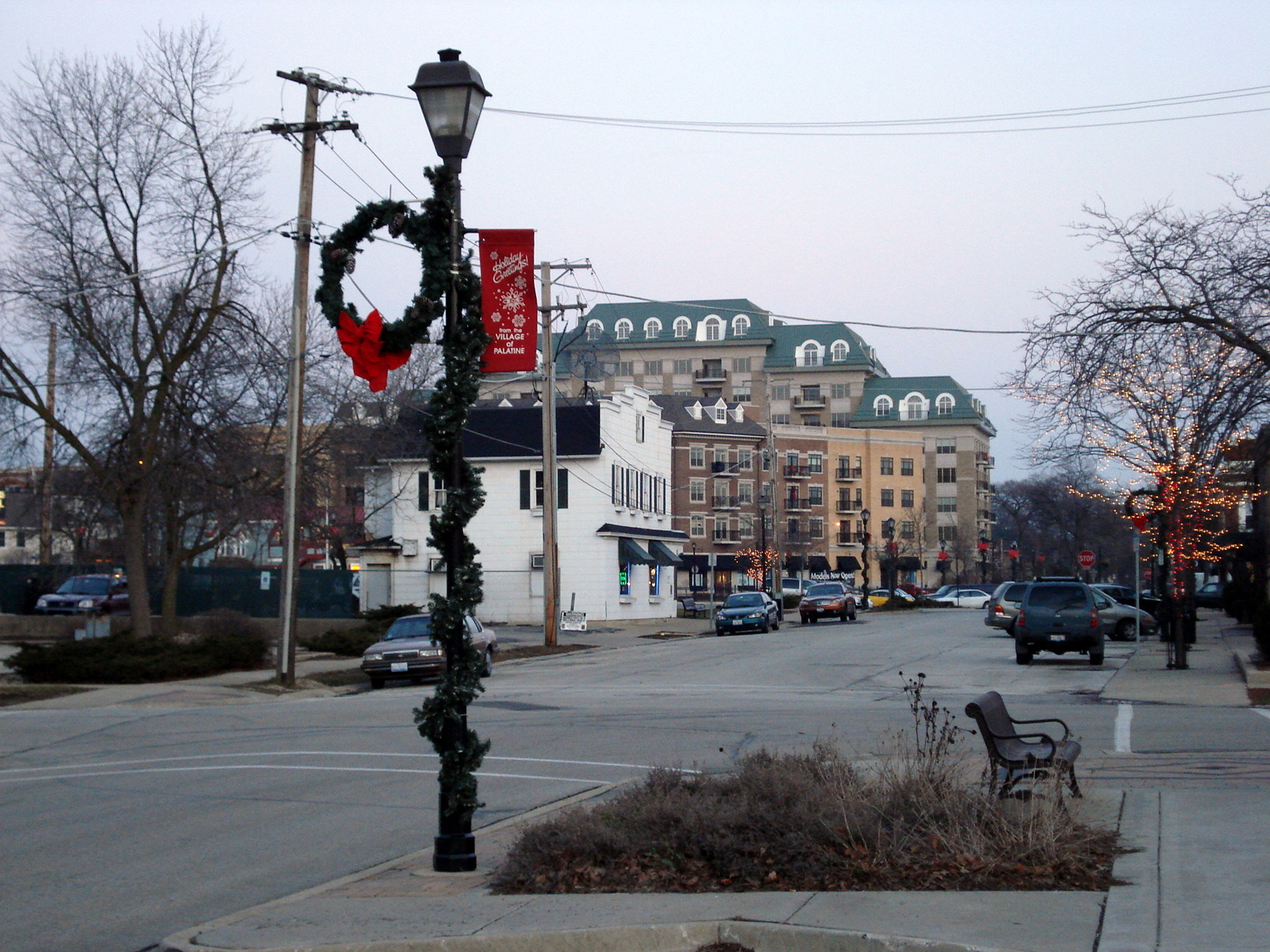 George Ela was also one of the first of a wave of pioneers to migrate to northern Illinois following the . A road which passes through the western edge of Palatine is called Ela in his honor.

The Village of Palatine was founded in 1866. It was built around a station on the new . Joel Wood surveyed and laid out the village, earning him the title of Palatine's founder. One of Palatine's original downtown streets is named after Wood.

A short line railroad, the , was built in 1911, and began full passenger service to in 1912. The line was finally closed in 1924 after a series of financial misfortunes and the improvement of roads in the area. The PLZ&W provided transportation to Dr. Wilson's Deer Grove Park, just north of Dundee Road in Palatine [Whitney, Richard. "Old Maud: The Story of The Palatine, Lake Zurich and Wauconda Railroad" : Transportation Trails, 1992. ISBN 0933449143] .

Palatine's first suburb-style subdivision was called Palanois Park, built shortly after . The town has experienced truly explosive growth since the 1970s, part of Chicago's ever-growing suburban sprawl. Palatine was home to the Cook County Fair from 1914 to 1931. The fairgrounds are now a sub-division with a name that pays tribute to Palatine's former fairgrounds.

Palatine was the location of the in 1993. Seven employees of a local were shot, and their bodies put into the restaurant's freezer, preventing police from establishing a time of death. The unsolved murders scarred Palatine and nearly ruined the Brown's Chicken company. No suspects were charged until 2002, when DNA evidence finally pointed to Juan Luna and Jim Degorski. Luna was a former employee, and both were former students at . Luna's trial officially began on , [Sadovi, Carlos. " [http://www.chicagotribune.com/news/local/lake/chi-0703290777mar30,1,6653489.story?ctrack=1&cset=true First 2 Brown's Trial Jurors Chosen] ", "Chicago Tribune", 2007-03-30] ; Luna was found guilty. Degorski, who will be tried separately, is awaiting trial.

Palatine operates under the Council-manager form of local government. Six councilmen are elected from their respective districts, while the entire village elects the Village Clerk and the Mayor. The council then hires a Village Manager to oversee the town's day-to-day operation. The current mayor is Republican Rita Mullins.

Palatine is in a wooded marshland where several streams rise around the village. Most of these streams meet up with the Salt Creek which rises at on the village's east side. The most notable exception is the northeast side, where its streams lie in the Buffalo Creek watershed. A small part of the east and southeast sides lies in the McDonald Creek watershed. As a consequence, floods occur very frequently in Palatine.

Palatine has one of the more diverse populations in the in regards to ethnicity and income. The village contains middle class, upper class, and working class communities. The eastern half of the village is generally more diverse in terms of income and ethnicity than the western half. Hispanics, Asians, and African Americans are all well represented within Palatine's population. Over one hundred languages are spoken in Palatine.Fact|date=February 2007 The village is home to a on its northwest side that is visited by Sikhs from across the country.

Palatine is part of Illinois' and . The village is home to two s, on the northeast side and on the southwest side; and a , . Both high schools and the college, as well as the public library, have received high national honors. There is one public junior high school in Palatine, Walter R. Sundling Junior High, while some junior high students attend Plum Grove Junior High in Rolling Meadows just outside the village limits. There are a total of nine public elementary schools in Palatine:

It is the mission of the Salt Creek Rural Park District to provide for the community a quality park and recreation system that is committed to excellence in service and facilities, as well as being sensitive to individuals and economics.

The Salt Creek Rural Park District was formed in 1956 and operates under the Park District Code of Statutory Laws which directly governs the power, duties, and purposes relating to park districts in the State of Illinois.

Legal voters from the park district elect seven non-paid park commissioners. Commissioners serve 6, 4, and 2 year terms. The Board of Commissioners elect a President, Vice President, Treasurer and Secretary. The commissioners appoint a Director of Parks and Recreation to manage the day-to-day operations of the district.

The Director of Parks and Recreation hires professional administrative staff to oversee the operation of parks, recreation facilities and recreation programs.

The district also provides recreation and leisure services to many non-residents of the area on a fee basis.

There were 25,518 households out of which 32.2% had children under the age of 18 living with them, 53.3% were married couples living together, 8.3% had a female householder with no husband present, and 35.0% were non-families. 27.5% of all households were made up of individuals and 6.2% had someone living alone who was 65 years of age or older. The average household size was 2.56 and the average family size was 3.18.

Palatine has been in the process of revitalizing its area since December 1999 [Village of Palatine. "Downtown Land Use Guide Update. Online: [http://www.palatine.il.us/downtown/index.htm] .] . This process has spawned a new passenger train station, a nearby parking garage, and several new s, rowhomes, and commercial buildings.

, manufacturers of the Weber grill, is located in Palatine.

, one of the largest makers of s, is headquartered in Palatine.