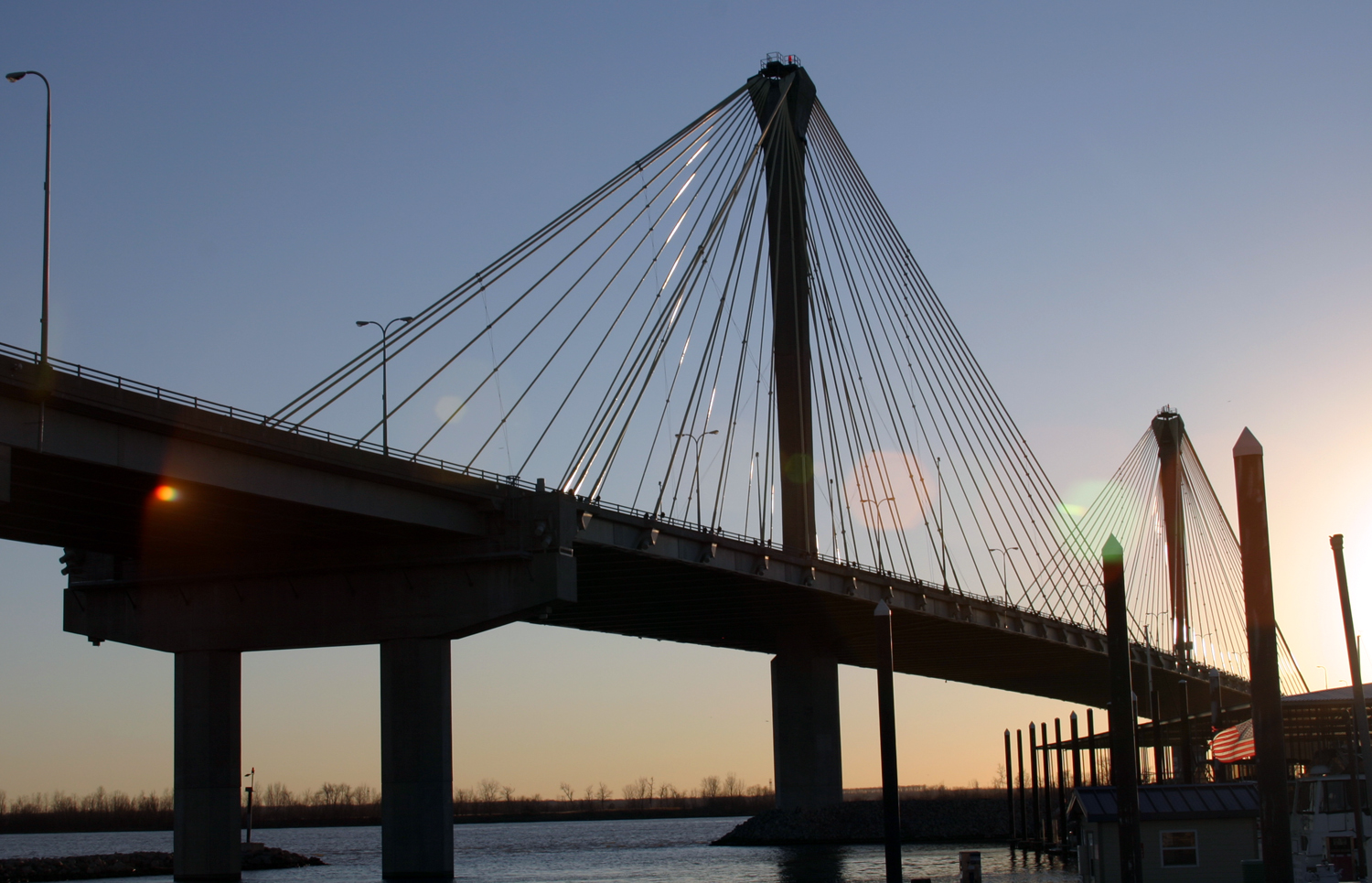 Alton is a city in Madison County, , , about 15 miles north of St. Louis, . The population was 34,511 at the 2006 census. Alton was ranked the 27th most livable small city in America by Money Magazine, edging out Edison, New Jersey by a slim margin.Fact|date=April 2008

The Alton area was home to Native Americans long before the founding of the modern city. While early historic accounts indicate occupation of this area by the or Illinois Confederacy, earlier native settlement is evidenced by the presence of the famous bird painted on a cliff face nearby, first seen by Europeans in 1673 by Father Pere Marquette.

Alton was developed as a river town in 1818 by Rufus Easton, who named the town after his son. He ran a passenger ferry service across the Mississippi River to the opposite Missouri shore. Alton is located amid the confluence of three important navigable rivers: the Illinois, the Mississippi, and the Missouri.Under construction is a monument, and multilevel observatory, located at the confluence of the Missouri and Mississippi near the levee in Wood River. Alton grew into a matter-of-fact river town with an industrial character and its steep-sloped streets filled with silos, railroad tracks, brick commercial buildings. Alton once was the site of several brick factories, and brick streets are still visible. Many blocks of housing in Alton were built in the Victorian Queen Anne style, which marks a more successful period of the city's history. Also, Alton is subject to floods, many of which inundated much of the historic down-town area. Visitors can see the various flood levels of different dates marked on the large grain silos near the Argosy Casino.

North along the river the River Road stretches north to Grafton, a dramatic contrast between the high cliffs of the Illinois side to the broad, flat, green countryside of . The is a popular bicycle tour destination. Hidden in a notch of the cliff is the tiny town of , once a down-and-dirty liquor-soaked tug-boater's retreat, now reborn as a quaint antique center with trimmed front lawns.

On , abolitionist printer was murdered by a mob of supporters of while he was attempting to protect his Alton-based press from being destroyed a third time. The mob then threw the press into the Mississippi. This tragedy marked Lovejoy as the first martyr of the abolition movement. As a consequence, the Thirteenth Amendment of the Constitution was drafted in Alton. Alton has been home to gangs of bootleggers in the thirties known throughout the state, and the overall bloody history of the town has contributed to the reputation of Alton as one of the most haunted places in America. Notable places include The History and Hauntings Bookstore, The McPike Mansion, and the old Milton School.

On , , Alton was the site of the seventh Lincoln-Douglas debate. There is a memorial at the site in downtown Alton that features statues of Lincoln and Douglas, as they would have appeared during the debate.

Alton has more earthly stories behind it as well. Once growing faster than its sister city of St. Louis, a coalition of St. Louis businessmen planned to build a town to stop the spread and bring business to St. Louis. The result was .

During the Civil War, Alton was home to a Union prison, from which prisoners would attempt to escape and cross the back to the slave state of . Also, some of Alton's majestic historic homes played a part in assisting the Underground Railroad. There is a Confederate cemetery on the north side of Alton, a memorial marker is present on the site.

At Robert Wadlow's grave (the worlds tallest man, ever), the earth is raised so visitors can compare its length to other graves, is in Upper Alton Cemetery. There is a memorial to him, including a life size statue, and a replica of his chair on College Avenue, across from the Southern Illinois University Dental School.

The have their American province motherhouse in Alton.

Because of Alton's close location to the Mississippi River, it was severely damaged and flooded by dangerously high water level in the . Alton's water supply was cut off due the proximity of it by the river, and townspeople had to go to [http://www.shopaltonsquare.com Alton Square] , the area's local mall, where they received bottle water. This water was donated from many local businesses, including of St. Louis, Missouri.

The new Lock and Dam #26 or Melvin Prince Lock & Dam, is available for tours, and is a favorite spot to eagle watch. There is a bird sanctuary across the river.

Alton has transformed itself into a popular [http://www.visitalton.com tourist retreat] . Alton's location and history make it a popular tourist area for antique shopping and gambling aboard the Argosy Casino. During the winter, many visitors from across the country come to Alton for birdwatching, as bald eagles roost on the bluffs along the Mississippi. Other Greater Alton attractions include Alton Marina, nine golf courses including Greater St. Louis' and Illinois' only [http://www.spencertolingolf.com Arnold Palmer designed and managed course] , [http://www.byways.org/explore/byways/10393/ Meeting of the Great Rivers National Scenic Byway] , [http://www.shopaltonsquare.com Alton Square Mall] , fine dining, night life, and bed and breakfasts including the [http://www.beallmansion.com "Best of Illinois"] (llinois Magazine Readers Poll). Alton is also a popular venue for weddings, receptions, and honeymoons.

Alton contains a number of landmarks. Among these are a statue of and the cable-stayed , which is one of only very few of its type in the world. The bridge has been called a 'Super Bridge,' and was the subject of a National Geographic special on its construction. The bird painting has also been restored after been vandalized by some high schoolers. The statue of the tallest man in the recorded history of the world, who at his tallest was 8 ft 11in., is another landmark of the town. There are also many historic landmark structures in Alton. One of which is the Franklin House, also later known as the Lincoln Hotel and now the [http://www.lincolnlofts.net Lincoln Lofts] , where Abraham Lincoln dined and may have slept just prior to his 7th debate with Stephen Douglason October 15, 1858. There are sautes of Lincoln and Douglas at the square on the corner of Landmarks and Broadway where they debate for the last for the 1858 Presidential Election.

Alton is home to Marquette Roman Catholic High School which is named after the Catholic French Explorer, Father Pere Marquette. The sports teams names are also called the Explores.There is a new public high school, Alton High School, complete with a three-court gymnasium and six tennis courts. Based on 2006 district data, Alton School district 11 Enrollment stands at 6,480; The average number of teaching years in the district is 13.5; The high school graduation rate is 97.7%; Elementary Pupil-Teacher Ratio - 18.9; and Secondary Pupil-Teacher Ratio - 22.3. The Alton High School has an award winning math team and music program. There is a "gifted" student program for 1st through 8th grade. This program exposes the participating students to a wider variation of knowledge as well as special projects. Alton High School offers an honors program with a weighted GPA scoring system to any honors class.