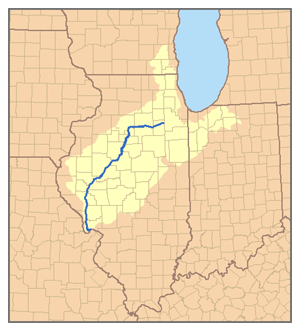 The Illinois River is a principal tributary of the , approximately 273 miles (439 km) long, in the of . The river drains a large section of central Illinois, with a drainage basin of 40,000 square miles (104,000 km²). The river was important among Native Americans and early French traders as the principal water route connecting the with the Mississippi. The colonial settlements along the river formed the heart of the area known as the . After the construction of the and the in the 19th century, the river's role as link between and the Mississippi was extended into the era of modern industrial shipping.

The Illinois River is formed by the confluence of the Kankakee and Des Plaines rivers in eastern Grundy County, approximately 10 miles (16 km) southwest of Joliet. It flows west across northern Illinois, passing Morris and Ottawa, where it is joined by the and Fox River. At La Salle it is joined by the Vermilion River, then flows west past Peru, and Spring Valley. In southeastern Bureau County it turns south at an area known as the "Great Bend," flowing southwest across western Illinois, past Lacon and downtown Peoria, the chief city on the river.

roughly follows the ancient channel of the Mississippi upstream to Rock Island.

The modern channel of the Illinois River was shaped in a matter of days by the Kankakee Torrent. During the melting of the Wisconsin Glacier, about 10,000 years ago, a lake formed in presentday Indiana, comparable to one of the modern . The lake formed behind the terminal moraine of a substage of that glacier. Melting ice to the north eventually raised the level of the lake so that it overtopped the moraine. The dam burst, and the entire volume of the lake was released in a very short time, perhaps a few days.

Because of the manner of its formation, the Illinois River runs through a deep canyon with many rock formations. It has an "underutilised channel," one far larger than would be needed to contain any conceivable flow in modern times.

The Illinois River valley was one of the strongholds of the confederation of Native Americans. The French first met the natives here in 1673. The first European settlement in the state of Illinois was the Jesuit mission founded in 1675 by Father on the banks of the Illinois at Starved Rock. In 1680, built the first fort in Illinois, Ft. St. Louis, at Starved Rock and later relocated to the present site of Creve Coeur, near Peoria, where the Jesuits relocated.

From 1905 to 1915, more freshwater fish were harvested from the Illinois than from any other river in the United States except for the . The river was once a major source of s for the shell button industry. , habitat loss from heavy siltation, and pollution have eliminated most commercial fishing except for a small mussel harvest to provide shells to seed oysters overseas. It is still commercially fished downstream of the Rt. 89 bridge at Spring Valley. The river is still an important sports fishing resource with a world-class fishery.

The Illinois forms part of a modern waterway that connects the at to the Mississippi River. The waterway was originally established by the building of the that connected the Illinois River to the . When the Chicago River was later reversed, the pollution and sewage of the city of Chicago flowed down into the Illinois River. The Illinois and Michigan Canal has since been replaced by the including the . The river is controlled by five locks and dams to facilitate river traffic. The waterway is heavily trafficked by barges transporting bulk goods such as grain and oil. It is used in the summer and early fall by pleasure boats cruising the .

is currently a known polluter of the Illinois River from its sewage system, which dumps raw sewage into the river approximately 25 times each year. This violation of the Federal Clean Water Act has drawn the attention of the , which has mandated that the city make improvements. [cite web | url = http://www.ci.peoria.il.us/docs/Publications/Community%20Newsletter/Newsletter%20Spring%2007.pdf | title = Spring 2007 River City Review (Mayor's Letter)]

*
*
* National Heritage Corridor runs along part of the Illinois River.
*
*
*