Music of Canadian Cultures is a wide and divers accumulation of music from many different individual communities all across Canada. With Canada being vast in size, the country throughout its history has had regional music scenes.[1] The music of Canada has reflected the multi-cultural influences that have shaped the country. First Nations people, the French, the British, the Americans and many others nationalities have all made unique contributions to the musical heritage of Canada[2]

The First Nations peoples of Canada are of a number of diverse ethnic groups, each of which have their own musical traditions. There are some general similarities, however. Music is usually social (public) or ceremonial (private). Public, social music may be dance music accompanied by rattles and drums. Private, ceremonial music includes vocal songs with accompaniment on percussion, used to mark occasions like Midewivin ceremonies and Sun Dances.

Approximately 25,000 Inuit live in Northern Canada, primarily spread across Nunavut, the Northwest Territories, and Nunavik (northern Quebec). Prior to European contact, Inuit music was based around drums but has since grown to include fiddles and accordions. Music was dance-oriented and requested luck in hunting, gambling, or weather, and only rarely, if ever, expressing traditional purposes like love or specialized forms like work songs and lullabies. In the 20th century, Inuit music was influenced by Scottish and Irish sailors, as well as, most influentially, American country music. The Canadian Broadcasting Corporation has long been recording Inuit music, beginning with a station in Iqaluit in 1961. Accordion players like Charlie Panigoniak and Simeonie Keenainak quickly found an audience, with the latter notably incorporating musical influences like polkas and jigs from Quebec and Newfoundland.

Katajjaq, or "Inuit throat singing", has become well-known as a curiosity. In this traditional singing style, female singers produce melodies from deep in their throats.[citation needed] A pair of singers stare at each other in a sort of contest. Common in Northern Quebec and Baffin Island, katajjaq singers perform in sync with each other, so that one is producing a strong accent while the other is producing a weak one. The contest ends when one singer begins laughing, runs out of breath or the pair's voices become simultaneous. To some extent, young Inuit have revitalized the genre, and musicians like Tudjaat have even incorporated pop structures.

Montreal's large immigrant communities include artists like Zekuhl (a band consisting of a Mexican, Chilean and a Quebecer raised in Cameroon), Karen Young, Eval Manigat (Haiti), and Lorraine Klaasen (South Africa), while Toronto has a large Balkan and Turkish community that has produced, most famously, the Flying Bulgar Klezmer Band and Staro Selo, alongside Punjabi by Nature, who incorporate bhangra, rock, dub, and English Punjabi pop, and the Afro-Nubians, who included musicians from across North America, Europe and Africa. Outside of these major cities, important artists include Uzume-Taiko and Silk Road Music from Vancouver and Finjan from Winnipeg. 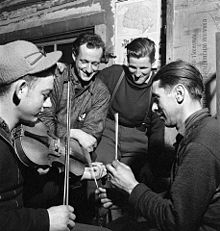 French-Canadian lumberjacks playing the fiddle, with sticks for percussion, in a lumber camp in 1943.

French settlers brought music with them when inhabiting what is now Quebec and other areas throughout Canada. Since the arrival of French music in Canada, there has been much intermixing with the Celtic music of Anglo-Canada. French-Canadian folk music is generally performed to accompany dances like the jig, jeux dansé, ronde, cotillion, and quadrille. The fiddle is a very common instrument, played by virtuosos like Jean Carignan, Jos Bouchard, and Joseph Allard. Other instruments include the German diatonic accordion, played by the likes of Philippe Bruneau and Alfred Montmarquette, spoons, bones, and jaw harps.

French settlers to Quebec established their musical forms in the future province, but there was no scholarly study until Ernest Gagnon's 1865 collection of 100 folk songs. In 1967, Radio-Canada released The Centennial Collection of Canadian Folk Songs (much of which was focused on French-Canadian music), which helped launch a revival of Quebec folk. Singers like Yves Albert, Edith Butler, and, especially, Félix Leclerc and Gilles Vigneault, helped lead the way. The 1970s saw purists like La Rêve du Diable and La Bottine Souriante continued the trend. As Quebec folk continued to gain in popularity, artists like Leonard Cohen, Harmonium, Kate and Anna McGarrigle, Jim Corcoran, Bertrand Gosselin, and Paul Piché found a mainstream audience.

Since 1979, Quebec music artists have been recognized with the Felix Award.

Main article: Music of the Maritimes

The Music of Canada's Maritimes has included many artists from both the traditional and pop genres.

The traditional genre is heavily influenced by the music brought to the region by the European settlers, the most well known of which are the Scots & Irish celtic and Acadian traditions. Folk songs are those passed on orally, usually composed by unknown persons. In the Maritime Provinces (New Brunswick, Nova Scotia, Prince Edward Island), sea shanties are widespread among the whaling and fishing workers. The lumber camps of New Brunswick have also produced their own body of folk songs. Irish and Scottish settlers in the eastern provinces of Canada brought traditions of fiddling and other forms of music. Having declined in popularity during the 20th century, a revival of Maritime traditional inspired music began in the late 1970s, led by artists such as John Allan Cameron and Stan Rogers and later, the The Rankins, Mary Jane Lamond, Natalie MacMaster, Ashley MacIsaac, Barra MacNeils, and Barachois.

Successful pop acts from all genres have had degrees of national and international success since the beginning of recorded music period. Performers as diverse as Hank Snow, Anne Murray, Matt Minglewood and April Wine have all experienced tremendous success as popular music acts with considerable national and international tours and record sales. Since the 1990s, bands such as Sloan, Joel Plaskett, Matt Mays and Buck 65 have made a considerable impact.

Anglo-Canadian folk ballads are particularly well-preserved in Newfoundland. The widespread "Barbara Allen" is found in dozens of variations, as are songs like "The Farmer's Curst Wife", "Lord Randall", and "The Sweet Trinity". With the advent of printing, broadside ballads were found throughout Canada, many of them Anglo songs telling sad songs about unfulfilled love. In addition to the influence of English West Country folk music and sea shanties, Newfoundland music heavily incorporates themes from Irish music, with elements of the provinces French and Portuguese history also represented.

As with the Maritime provinces, contemporary artists were the catalyst for a revival of interest in traditional music. Great Big Sea, Figgy Duff and Irish Descendants carried the traditional sounds of Newfoundland across Canada and around the world, with the most popular being Great Big Sea.

Among the lumber camps of Ontario and British Columbia, and among the homesteaders and farmers of Alberta, Saskatchewan, and Manitoba, Anglo settlers adopted numerous American songs. "Bury Me Not on the Lone Prairie", for example, and the song known as "Prairie Land", "Saskatchewan" or "Alberta Land", which is adapted from an American song called "Beulah Land".

The history of Caribbean music in Canada started in 1967, with Toronto's first annual Caribana festival. By 2000, Canada began to develop as a new pole in the Caribbean music industry. This is especially true of the genres Soca and Calypso. The recent changes in Canada's immigration laws have seen several prominent music artistes from the Commonwealth Caribbean like David Rudder and Anslem Douglas resettle with their family to Canada and developed a burgeoning Caribbean music industry based in Canada.[6]

This trend has also been reinforced by a decrease of the industry in the New York City area, mainly spurred by factors like the rebranding of the 30+ year old Caribbean radio station WLIB 1090-AM by Inner City Broadcasting Corporation in 2004. The ICB rebranding was a tremendous setback to the Caribbean community and, in essence, splintered the Caribbean music industry again across the New York City metropolitan area. In Canada, station's like Flow FM and CHIN, both located in Toronto, Ontario have served to bind the Caribbean music industry with their regularly rotated scheduling for Soca and Calypso music. During this time, several of the leading Caribbean music DJs industry (which just happen to be based in Ontario) took to the air and launched several new songs or mixes. Some song mixes have been entered for various Caribbean Carnivals back in the Caribbean region and created awareness in the Caribbean of new Soca and Calypso talent based in Canada.