MuchMusic
For other uses of "MuchMusic", see MuchMusic (disambiguation).

MuchMusic (often referred to only as Much) is a Canadian English language Category A specialty channel owned by Bell Media. MuchMusic is dedicated to music-related programs, pop and youth culture.

MuchMusic was licensed on April 2, 1984 by the Canadian Radio-television and Telecommunications Commission (CRTC) to CHUM Limited.[1] Shortly thereafter, MuchMusic was launched on August 31, 1984 as one of the first Canadian cable specialty channels on the air. It was headed by John Martin and Moses Znaimer, the channel's founders. On June 22, 2007, CTVglobemedia gained control of MuchMusic as a result of a takeover of CHUM Limited.

The first video played on MuchMusic was "an early music-to-film synchronization short from the 1920s which featured Eubie Blake performing Snappy Songs."[2] The first video made specifically for television air play was Rush's "The Enemy Within".[2]

Bell Canada gained control of MuchMusic through its takeover of CTVglobemedia on April 1, 2011, thus renaming the company's name to Bell Media and giving the channel a new look and a new logo, as well as airing television shows, mainly dramas and reality shows.

Making use of CHUM's facilities and production teams, the channel has produced many specialty musical and variety programs, including the long-running dance program Electric Circus and the late-1980s game show Test Pattern, and it adopted some programs originally created for CHUM such as City Limits, which featured alternative videos.

MuchMusic is well-known for its annual music awards show every Father's Day. It is anticipated and promoted for weeks before the night of the MMVAs. 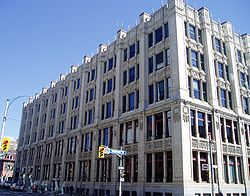 The MuchMusic World Headquarters is located on 299 Queen Street West in Downtown Toronto.

It has been credited with helping to foster a vibrant Canadian music scene because of the Canadian content broadcast rules which mandated native musical acts had a secure and prominent place on the channel's play schedule[citation needed]. As well, MuchMusic funds the creation of new Canadian music videos through MuchFACT and produces the popular album series Big Shiny Tunes and MuchDance.

As of 2007, MuchMusic has started to air a vast number of non-music related programs such as Girlicious, Greek, America's Best Dance Crew, The O.C., Gossip Girl, and BECK: Mongolian Chop Squad (the latter ended its run in June 2007). These programs would often air repeatedly to gain interest from viewers. Before those programs aired, Much Mega Hits was a prominent program that played various music videos based on singles. As a result, BECK: Mongolian Chop Squad was one of the only anime shows aired on the channel.

MuchMusic broadcasts films every Friday night under its MuchMovie banner. The films span across various genres but aiming its youth demographic. However, much of the scenes are edited or cut due to broadcasting reasons. An example would be 8 Mile, which muted the profanity and removed the sexual and violent content.[citation needed]

In recent years, particularly with the brief arrival of MTV on Canadian digital cable, the influence of MuchMusic has waned[citation needed], and the channel has had to weather criticism that it focuses too much on "top 40" acts and imported MTV "reality shows" like Newlyweds: Nick and Jessica and Pimp My Ride, thereby not giving enough time to smaller, independent, and Canadian performers. But in 2005 Video On Trial premiered, and quickly became the network's highest-rated show while featuring Canadian comedians and personalities almost exclusively as music video "judges". A special, "Stars On Trial", featured popular VOT regular Ron Sparks as the judge and was the highest-rated special of the year (other than the annual MuchMusic Video Awards show).

Much has also been the centre of controversy because of its leniency in censorship, sometimes leaving expletives uncensored from videos played on the network, in contrast to MTV, which goes to great lengths in censoring music. However, some programs, due to their wider audience, do remain censored for content. As with MTV, the network also generated controversy by occasionally "banning" videos it deemed too racy or violent for broadcast. Unlike MTV however, MuchMusic broadcasts the controversial videos in a series of late-night specials dubbed Too Much 4 Much, along with panel discussions on their content and arguments on if it should be banned or not. However, recently, many of the videos are censored, and even airs the MTV censored version.

MuchMusic was launched in part to capitalize on the success of MTV, the American cable music channel that had premiered a few years earlier. Although never an affiliate, Much over the years would often broadcast MTV-produced programming such as awards shows, concerts, reality TV series and more. MTV itself was not permitted in Canada because of Canadian Radio-television and Telecommunications Commission (CRTC) restrictions on format protection. However, no such restrictions existed in the United States, where CHUM attempted to compete with MTV through MuchUSA (now the unaffiliated Fuse).

Perhaps owing to this, MTV was unwilling to extend its relationship with MuchMusic longer than necessary, and has made two attempts to launch a competing MTV channel in Canada. The first attempt began in 2001 when MTV Canada was launched by Craig Media and Viacom. MTV Canada had an edge over MuchMusic in that it was licensed by the CRTC as a broadly based teen channel and could air programming from various categories and not just music related programming. In 2004, MTV Canada's owners were bought by CHUM, allowing Viacom to exit its contract with Craig, and stripped MTV programming and branding from the channel forcing Viacom to find another partner to bring MTV to Canada.

The next attempt began in 2006 when Viacom partnered with CTV to rebrand its low rated specialty channel talktv as MTV. With the new launch of MTV in March 2006, MuchMusic lost all rights to MTV programming from that point forward.

Since the acquisition of CHUM Limited (which includes MuchMusic and MuchMore) by CTVglobemedia, MTV and MuchMusic have technically been under the same ownership since June 2007. CTVglobemedia has announced that they plan on maintaining all CHUM's specialty channels including both MuchMusic and MTV. Currently both CTVglobemedia and Viacom have no plans on disaffiliating either channel from its programming and/or branding. In fact, MuchMusic and MTV have even begun airing each other's promo ads (e.g., MuchMusic airing a promo for MTV's The Hills).

With the success of MuchMusic, several spinoff channels have been launched within Canada and around the world, including:

On June 1, 2011 MuchMusic launched a high definition simulcast of the standard definition feed called Much HD.[4] It is currently only available on Bell Satellite TV, Bell Fibe TV, Rogers Cable and EastLink.

A wide range of individuals have served as MuchMusic's on-air hosts, or VJs. A number of notable Canadian and American television personalities either began their careers at MuchMusic or spent time there. Among these are J.D. Roberts who today (2010) under the name John Roberts is an anchor for CNN; Christopher Ward, a noted songwriter and producer who collaborated musically with Mike Myers on the Austin Powers movies; Sook-Yin Lee, now a noted CBC Radio host and actress; Terry David Mulligan, a prolific film and TV character actor; actress Amanda Walsh; Erica Ehm, who became a noted songwriter after leaving Much; and George Stroumboulopoulos, now a Canadian television personality on CBC.

Every few years, when new video jockeys are needed, Much runs a "VJ Search" to pick one new VJ to join the team of VJs. They will usually visit cities across Canada and pick people who appear to show potential through their audition. In earlier years, the VJ Search was usually a two-part show, but in 2006 it evolved into its own reality series called Muchmusic VJ Search. As a result of that series Tim Deegan was chosen as a VJ. It was followed in 2009 by VJ 2.0 where the winner Liz Trinnear was also engaged for the station.

Despite the popularity of the VJ Search, most VJs are still hired by Much directly, without being VJ Search contestants.