Manitoba Telecom Services Inc. (TSX: MBT), or MTS , formerly Manitoba Telephone System, is the primary telecommunications carrier in the Canadian province of Manitoba and the fourth largest telecommunications provider in Canada[2] with 7000 employees. It provides local and long-distance phone services, television service, Internet service and wireless services including digital PCS, cellular, and paging. Since acquiring Allstream in 2004, the company is known as "MTS Allstream Inc."

MTS is the descendant company of Manitoba Government Telephones which went into operation in January 1908. The Crown corporation eventually absorbed all private telephone operations in the province. In 1996, the Provincial government of Premier Gary Filmon decided to sell the Manitoba Telephone System to private shareholders. The decision to privatize was seen as controversial, as it marked a significant departure from the Progressive Conservatives' earlier position that MTS should remain provincially-owned.[3]

The company's head office is located in MTS Place on Main Street, in Downtown Winnipeg, Manitoba.

In 1908, the Province of Manitoba assumed responsibility for telephone service in the province, purchasing the Bell system from Bell Telephone Company of Canada for $3.3 million.[4]

Radiotelephone service was added to the communities of Gimli, Norway House, and The Pas in 1948.[5]

A new wing was built at the Fort Rouge Exchange in 1950, and automatic switching equipment was installed in the same year. This was the first of its kind in North America.[5] 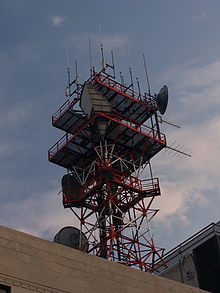 On Sunday, September 30, 1956, MTS connected to the TCTS microwave network, from the new 85-foot (26 m) high microwave tower built at the Fort Rouge Exchange on Corydon Ave.,[6] which meant that Winnipeggers were now able to receive non-live CBC programming on CBWT the same day it was broadcast in Toronto, and Montreal. Also voice long distance calls were made more efficient.[7] There were 120 voice circuits east of Winnipeg and 96 between Winnipeg and Regina. The television signal from CBC was sent to CBC Winnipeg via underground & submarine cable under the Assiniboine River.[5]

At midnight on June 21, 1959, Winnipeg was the first urban area in North America to implement the 9-9-9 Emergency Number.[8]

Also in the late 1950s, MTS located one of its administrative offices on Empress St. near the newly opened Polo Park Shopping Centre complex. In 2001 these employees were moved to 333 Main St., commonly known as MTS Place, where 1200 employees now work. This formed part of the Province's Downtown First strategy.

In the late 1970s, similar to policy changes implemented by AT&T in the U.S., MTS allowed its customers to purchase their own telephone equipment and with this, provided free installation of RJ11 telephone jacks.

In the Spring of 1979, MTS announced that it would be a pioneer in two-way electronic information services. The trial was called Project IDA and ran from 1980 to 1981.

MTS was a pioneer in offering videotex at the commercial level. In 1981, it partnered with Infomart (then owned by the Torstar and Southam newspaper chains) to create the Grassroots service, providing information relevant to farmers on the Canadian prairies. Customers paid $47.50 per month to subscribe to Grassroots, plus connection fees to DATAPAC. Terminal equipment was manufactured by Norpak.

In the mid-1980s, MTS started a subsidiary known as MTX, which had invested in telecommunications in Saudi Arabia. However MTX was forced to shut down after controversy about the company back in Manitoba after MTX lost $27 million on the venture.

In 1996 in a controversial decision, the Provincial government decided to sell the Manitoba Telephone System to private shareholders. The vote to privatize MTS was held in early December 1996.

In January 1999 MTS partnered with Bell Canada to form Intrigna, which was a company created to expand telecommunications options for the business market in Alberta and British Columbia. As part of the deal, Bell Canada gained 20% ownership of MTS. They set up a jointly operated office in Calgary. By the summer of 1999, fibre optic cable had been laid in Edmonton and Calgary, and later extended to Vancouver. Intrigna was renamed Bell West.[9]

In the Fall of 1999 MTS began to offer DSL high-speed Internet service in Winnipeg and Brandon, which later expanded to other areas of the province.[9] 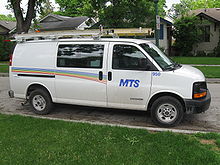 The CRTC met with the various telecommunications providers in Canada and required of them to implement a Service Improvement Plan (SIP). This meant that MTS had to improve service to northern remote areas that even by the 21st century had poor quality phone service. Customers in northern Manitoba complained that the microwave system could not handle data communications (modem, fax) well. This, as well as the collapse of a microwave relay tower linking Churchill in early January 2000, lead MTS to initiate upgrades to the Radisson-Churchill corridor with fibre optics and the Lynn Lake-Thompson corridor with a digital microwave system to replace the outdated equipment.[10]

In 2004, MTS acquired Allstream (formerly AT&T Canada) for $1.7 billion and merged both companies.

Cellular telephone service is currently available in 97% of the province, but some areas, like Piney, Manitoba aren't scheduled to become cellular capable until around 2009.[11]

On December 10, 2003 MTS bought the naming rights for the True North Centre, making it the company's single largest advertising expenditure. The entertainment, sports and performing-arts facility is now known as the MTS Centre. The company also has a long-running TV ad campaign featuring various talking bison.

The Enterprise Solutions division, which operates under the Allstream brand nationally and under the MTS Allstream brand in Manitoba, is in the national business and wholesale markets. This division offers Internet protocol connectivity, unified communications, IT consulting and security services, and voice and data connectivity services. The Consumer Markets division leads every telecommunications market segment in Manitoba,[citation needed] selling next generation wireless, high-speed Internet and data, digital television and wireline voice services under the MTS brand, as well as small business services in Canada under the Allstream brand, and security and alarm monitoring services through the company’s subsidiary AAA Alarm Systems Ltd., which also operates in other western provinces. The company’s national broadband fibre optic network spans more than 24,300 kilometres, and provides international connections through strategic alliances and interconnection agreements with other international service providers. Manitoba Telecom Services Inc.’s common shares are listed on The Toronto Stock Exchange (trading symbol: MBT). In October 2008, MTS Allstream was named one of Manitoba's Top Employers, which was announced by the Winnipeg Free Press newspaper.,[citation needed]

In January 2011 MTS officially launches an announcement webpage on their website stating that their new HSPA+ wireless network is to launch on 31 March 2011, along with the support Apple's iPhone 4 shortly after. The new wireless network will make use of Simcard technology, and will provide data speeds up to 21Mbits/s. MTS' current CDMA network will continue to work with current handsets. MTS is also allowing the use of unlocked HSPA+ devices which support the HSPA 850Mhz signal.[12]

The administration offices are located at 333 Main St., in the former Bestlands Building. The complex is now known as MTS Place.

The MTS Long Distance Gateway is located in the J. F. Mills Building on Corydon Avenue near what is locally known as Confusion Corner. One of its functions is to transmit local television signals from Winnipeg to retransmitters throughout the province.