CHUM Limited was a media company based in Toronto, Ontario, Canada from 1945 to 2007. Immediately prior to its acquisition, it held full or joint control of two Canadian television systems — Citytv and A-Channel (formerly NewNet, now CTV Two) — comprising 11 local stations, and one CBC Television (Canadian Broadcasting Corporation) affiliate, one provincial educational channel, and 20 branded specialty television channels, most notably MuchMusic and its various spinoffs. In addition, CHUM controlled 33 radio stations across Canada. At various points in its history, CHUM owned other radio stations and ATV/Atlantic Satellite Network in Atlantic Canada.

CHUM was taken over by Bell Globemedia (now Bell Media), owner of the CTV Television Network in July 2006. Regulatory approval was made conditional on the sale of CHUM's five Citytv stations to Rogers Communications. CTVglobemedia took control of CHUM's other assets effective June 22, 2007. The company itself has since been renamed CTV Limited (now CTV Inc.) and continues operation as a subsidiary of Bell Media. Its radio broadcasting division, CHUM Radio has since became Bell Media Radio after Bell Canada took control of CTV's assets, thus becoming Bell Media. Its Toronto radio stations TSN RADIO 1050 and 104.5 CHUM-FM continues use "CHUM" as their station's call sign. However, CHUM no longer operates as a broadcasting company separate from its new parent.

With the sale of CTVglobemedia to Bell Canada as announced in September 2010 (pending CRTC and Competition Bureau approval), Bell would (if approved) take control of most of CHUM's former assets for the first time.[1] And CTVglobemedia became known as Bell Media in April 1, 2011, after the deal to purchase the stations was finalized. 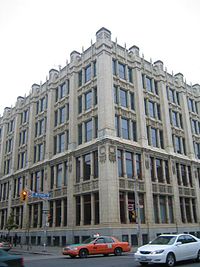 Although CHUM's radio holdings tend to retain traditional formats, their television stations reflected the avant garde philosophy of former senior executive Moses Znaimer, who turned his hip, local style of television broadcasting into an image as perhaps Canada's most flamboyantly visible media titan in the 1980s and 1990s. (Znaimer retired from active management at CHUM in 2003, and briefly continued to work on projects with the company, before moving on to other ventures such as CFMZ-FM.)

CHUM Limited's headquarters were located at 299 Queen Street West in Toronto, the famous CHUM-City Building, Today it is used by Bell Media.

In addition to its own stations, CHUM was one of several sources (alongside CanWest's CH / E! and Global TV) providing syndicated programming to independently owned CBC and CTV affiliates.

On July 12, 2006, CHUM announced that it had agreed to a takeover by Bell Globemedia, renamed CTVglobemedia and now Bell Media, (herein abbreviated "CTV" or "CTVgm" for brevity), in a transaction valuing CHUM at $1.7 billion CAD. The takeover required approval from two regulatory bodies, the Competition Bureau, which approved the transaction on March 2,[2] and the Canadian Radio-television and Telecommunications Commission (CRTC), which held a public hearing beginning April 30, 2007 in Gatineau.[3]

CTVgm's takeover bid was completed on October 30, although CHUM was immediately in a blind trust under lawyer John McKellar.[4]

Immediately following the announcement, CHUM separately announced 281 layoffs, primarily at its local stations in western Canada; local newscasts (other than Breakfast Television and the Noon News in Calgary and Edmonton) at all Citytv stations in the region were immediately pulled. CHUM claims the layoffs were part of an ongoing process to streamline its operations and not directly related to the takeover.

On June 8, 2007, the CRTC approved the CTV takeover of CHUM. However, the CRTC made the deal conditional on CTV divesting itself of Citytv rather than A-Channel. This consequently voided the Rogers deal; on June 11, 2007, Rogers announced that it has agreed to buy the Citytv stations. CTV said it would keep all other assets, except CHUM's interest in MusiquePlus/MusiMax, and potentially CKX-TV and CLT.

The company officially ceased operations on June 22, 2007 after the deal was finalized.

With CHUM Limited dissolved, there were a number of changes turned the tables. Between 2008 and 2009, Corus Entertainment acquired SexTV: The Channel, CLT, and Drive-In Classics from CTV Ltd. for an estimated worth $73 million and $40 million each. However, it was announced that CTVglobemedia would be selling CKX-TV in Brandon, Manitoba to Bluepoint Investment Corporation for a dollar. But that station was closed down on October 2, 2009, after Bluepoint rejected the deal the day before. At the same time, they shut down CKNX-TV.

For Citytv, the transaction was worth of $375 million. Media analysts have suggested that with a more powerful media conglomerate such as Rogers behind them, that the Citytv stations will effectively become Canada's fourth full-fledged commercial television network, in effect if not immediately in name. The Citytv transaction was approved by the CRTC on September 28, 2007, and Rogers officially became Citytv's new owner on October 31. Rogers subsequently purchased 33 Dundas Street East, the former Olympic Spirit building, located at the edge of Dundas Square for the use of its Toronto television stations, and CITY-TV moved out from 299 Queen Street West into the new facility on September 8, 2009.

In 2010, CP24 extended their 5:00pm newscast after the announcement regarding their massive firings taking place at Rogers Media's Citytv stations across Canada including the cancellation of Citytv Toronto's CityNews at Five. That same year, Corus relaunched CLT as "Viva", then OWN: Oprah Winfrey Network on March 1, 2011. As well, Star! will be relaunched as E! on November 29, 2010 after CTV announced it had signed a multi-year deal with Comcast.

Unification of CHUM to Bell

In September 2010, BCE announced plans to re-acquire 100% of the company's broadcasting arm, including CTV Limited. Under the deal, Woodbridge, Torstar, and Teachers' received $1.3 billion in either cash or equity in BCE, while BCE will also assume $1.7 billion in debt (BCE's existing equity interest is $200 million, for a total transaction value of $3.2 billion). Woodbridge will simultaneously regain majority control of The Globe and Mail, with Bell retaining a 15% interest. The deal is expected to close by mid-2011 pending CRTC approval.[1] CTVglobemedia officially became Bell Media when the deal was finalized on April 1, 2011. At the same time, CHUM Limited / CTV Limited became CTV Inc. and CHUM Radio became Bell Media Radio.

Radio stations at time of sale

In November, 2004, CHUM and Astral Media filed an application with the Canadian Radio-television and Telecommunications Commission for a subscription radio service in Canada. That application, along with two satellite radio services, were approved by the CRTC on June 16, 2005. While the two satellite services launched soon after the decision, CHUM did not implement its service, the authority for which expired on June 16, 2007 (two years after licensing).

Television stations at time of sale