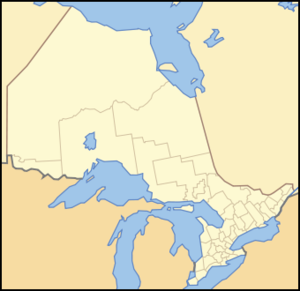 The first European settler to the area now known as Pembroke was Daniel Fraser in 1823, who squatted on land that was discovered to have been granted to a man named Abel Ward. Ward later sold the land (where Moncion's Grocers is located) to Fraser, and nearby Fraser Street is named after the family.
, a veteran of the arrived in , squatting beside Fraser on the land where Dairy Queen is now located. Other settlers followed, attracted by the growing lumbering operations of the area.

Pembroke became a in . Pembroke is named after , First Admiralty Secretary from 1841 to 1845 and son of .

Pembroke was incorporated as a town in and as a city in . It was named seat for Renfrew County in . This set the stage for construction shortly thereafter on the Renfrew County Courthouse, which finished in 1867, and the arrival of many civil servants, much wealth and much construction. In the 20-year period following 1861, Pembroke basically became the city it is today in terms of layout and buildings, although many homes and other structures have been lost to time. A fire in 1918 destroyed much of Pembroke's downtown.

From 2005 to 2007, the Courthouse and Jail (now non-functional) were re-constructed into one building and historic renovations were also completed. Visitors on weekdays can view original 1867 jail cells in the basement, and the original courtroom, complete with a huge replica of the original brass light fixture. County meetings were held here for many years. Three hangings occurred at the indoor gallows inside the Courthouse, two in the 1870's and one in 1952.

Other historic buildings that survive in Pembroke include a historic synagogue, two original hospitals, the Dunlop mansion (Grey Gables Manor Bed & Breakfast), the 'Munroe Block' downtown, and two houses belonging to the White family. A fire in 1918 downtown destroyed many buildings, including the Pembroke Opera House.

Pembroke is the largest commercial centre between North Bay and . Historically, forestry and farming formed the backbone of the local economy and remain important today. Local timber products include lumber, plywood, veneer, hydro poles and fibreboard. Other local manufacturing operations produce office furniture. in nearby , of in Chalk River and OLS call centres are also regional employers.The economy also benefits from tourism, aided partly by Pembroke's location on the . Pembroke is a gateway to natural adventures on the Petawawa and Ottawa Rivers, Algonquin Park and to world-class white water rafting a short distance to the southwest.

Local attractions include an outstanding number (30) of striking historic s in the downtown area depicting the history of the city, from steam engines to logging. The Champlain Trail Pioneer Village and Museum [http://www.downtownpembroke.com/pembrokemuseum] , features costumed guides who provide interpretation for guests. The history of Ottawa Valley settlers comes alive inside the fully furnished schoolhouse, pioneer log home and church - all built in the 1800’s. Other outdoor exhibits include train station, sawmill, blacksmith shop, stonelifter, carriage shed, woodworking shop, bake oven, smokehouse and a 1923 Bickle fire engine. The large museum features artifacts which range from fossils and Native Canadian arrowheads to furniture, clothing and manufactured products of Pembroke from various eras. There is also a replica of Samuel de Champlain's Astrolabe (he brought the original to the Valley in 1613), an original Cockburn pointer boat, Corliss steam engine, doctor's examination room, fancy parlour rooms, general store, hair salon and more.

Pembroke has more murals than almost any city in Canada. See [http://www.muralroutes.com/mmapcan.htm Mural Routes of Canada] for more.

The city is home to the annual "Old Time Fiddling and Step Dancing Festival" that happens Labour Day weekend at Riverside Park. There are often up to 1400 RVs parked there for the week preceding the event. Award-winning fiddler/step dancer is a Pembroke native. It is also host to the annual [http://www.silverstick.pembroke.on.ca/index.htm "Silver Stick Minor League Hockey Tournament"] . Silver Stick brings in several hundred children and youth on weekends in November and early December for regional qualifying games.

Pembroke's Public Library was designed by architect , a contemporary of .

Pembroke has been the home of the Junior A Hockey Club since 1958. They have been members of the since 1961.

The city's main daily newspaper is the "The Daily Observer". The Observer also publishes the twice-weekly free "The News", a carrier for flyers.

*Pembroke is the birthplace of comedian , although Green's family subsequently moved to .
* also known as Paul Martin, Sr., noted lawyer, politician and father of former Prime Minister was raised in Pembroke.
*Pembroke boasts three NHL Hall of Fame hockey players: , and (see mural below).
*Rower/kayaker Sarah Boudens, who will be participating in the 2008 Beijing Olympics, is a Pembroke native.
*, a country singer who was born and raised in Pembroke