Bell Media Radio is the Canadian radio broadcasting division of Bell Media which is owned by BCE Inc. The division owns the bulk of the radio properties owned by CHUM Limited until 2007, when it was purchased by CTVglobemedia (now Bell Media).

Bell Media Radio currently owns 35 radio stations across Canada, broadcasting in 16 markets, including most of Canada's largest radio markets. The company's programming is also distributed to other stations across Canada via its syndication division, which prior to the acquisition by Bell was known as the CHUM Radio Network. This division has since been renamed to Bell Media. On top-of-the-hour ID's for its radio stations, the ID's include "A division of Bell Media" after the call letters and city-of-license.

As of August 2009, its head office is currently located at 250 Richmond Street West in Toronto, the studios of its Toronto flagship stations 104.5 CHUM-FM and TSN RADIO 1050. In July 2008, CTVglobemedia sold its former location 1331 Yonge Street to developer Aspen Ridge Homes for $21.5 million.[2] The stations were expected to move to 250 Richmond Street West, a downtown location near 299 Queen Street West.[3]

The large "Dial 1050 CHUM" neon sign from the Yonge Street building, which is considered a Toronto landmark, has been moved to the new location, and has added "Dial 104.5 CHUM" to the sign.[4] 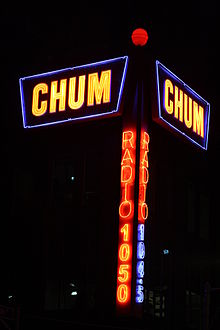 The CHUM neon sign in 2010, relocated to 250 Richmond Street West

CHUM Radio also previously operated CHUM Satellite Services, a multimedia division which provided programming and production services for corporate clients. This operation was acquired in 2009 by Stingray Digital,[5] which eventually renamed it Stingray360.

Re-acquisition of CTVglobemedia by Bell

Bell Media Radio's stations broadcast in a variety of formats, although hot adult contemporary and adult hits are particularly common. Its hot AC stations use a variety of brand names, but are all patterned to an extent after flagship CHUM-FM, while its adult hits stations are all branded as Bob FM. The company is the fifth largest private-sector radio operator in Canada behind Astral Media, Newcap Broadcasting, Rogers Media and Corus Entertainment.

The stations typically air locally-produced or voice-tracked programming for the majority of their schedules, although some national network programming, including the weekly MuchMoreMusic Countdown, also airs. In 2007 and part of 2008, the hot adult contemporary radio stations also aired the national evening program The Sound Lounge.

The company also operates four sports radio stations, all branded as The Team. Three of these stations were formerly part of a larger but short-lived national sports radio network, which was launched by CHUM Limited in 2001 on virtually all of the company's AM radio stations across Canada, but was dissolved in 2002 due to poor ratings. Its remaining AM stations air either oldies or news/talk formats. However, many of these stations are expected to return to a sports format under the new TSN Radio branding later in 2011 starting with Toronto's radio station CHUM (1050 AM) on April 13, 2011,[8]