Baroque pop, Baroque rock,[1] or English baroque,[2] often used interchangeably with chamber pop/rock,[3] is a pop and rock music subgenre which originated in the mid-1960s in the United Kingdom and United States. It originated as a fusion of early pop and rock music, specifically rock and roll, with classical music, most specifically that of the baroque and classical eras.

Baroque pop reached the height of its popularity in the mid to late-1960s, with several prominent groups and artists both emerging or incorporating the genre into their work, such as The Beach Boys, The Beatles, Left Banke, The Rolling Stones, Love and Procol Harum, amongst others. Whilst baroque pop's mainstream popularity faded by the 1970s, as other rock and pop genres such as punk rock, disco and hard rock took over, music was still produced within the genre's tradition,[2] and it exerted an influence on several pop and rock music subgenres. Chamber pop, for instance, a 1990s genre which contested the alternative rock and grunge aesthetic of much music at the time, has similar characteristics to 1960s baroque pop,[4] especially with regard to ornate production and classical influences. Since the 1990s, baroque pop has seen a revival, with several prominent artists, such as Andrew Bird, Belle and Sebastian, Regina Spektor and The Divine Comedy, performing in the genre or incorporating elements of it in their music.

The term "baroque rock" has been used since about 1966 to describe harder edged and less commercial music with similar influences.[1] "English baroque" is also used to describe British pop and rock music that made use of this style of instrumentation.[2] "Chamber pop" or "chamber rock" are usually used to refer specifically to music that utilises the string instruments of chamber music and so can be seen as a sub-set of baroque pop and rock.[5]

In classical music the term "Baroque" is used to describe the art music of Europe approximately between the years 1600 and 1750, with some of its most prominent composers including J. S. Bach and Antonio Vivaldi.[6] Much of the instrumentation of baroque pop is akin to that of the late Baroque period or the early Classical period, chronologically defined as the period of European music from 1690 to 1820 and stylistically defined by balanced phrases, clarity and beauty, using instrumentation similar to modern orchestras.[7] When applied to popular music the term has been used without much regard to these boundaries to describe the use of musical forms and instrumentation from a wider range of eras.

The genre was intended to be less "wild" than rock music at the time,[4] and a less commercial, more serious and "mature" offshoot of the genre.[4] Baroque pop may be distinguished from progressive rock, which also uses classical instrumentation, by its generally simpler song structures closer to standard pop song writing, and also by its more mainstream lyrical content as opposed to the generally conceptual lyrics associated with later progressive rock. [5]

Baroque pop, stylistically, fuses elements of pop and rock with classical music, often incorporating instruments not common to rock and roll such as harpsichords, clavichords, violins, cellos and other strings, oboes and French horns. It is also generally characterised by highly orchestral,[4] lush instrumentation. Common elements of baroque pop also include layered melodies, sophisticated productions and prominent harmonies.[4] Traditionally, baroque pop is also generally quite melancholic and dramatic music,[4] which contrasts it from its more cheerful counterpart, sunshine pop.[5] 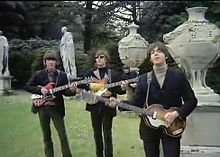 The Beatles with the help of George Martin, used classical instruments to their fullest to define the sound of Baroque pop.

The exact origins of baroque pop are difficult to determine with certainty. In the early 1960s Burt Bacharach had experimented with unusual instrumentation, like the use of flugelhorn on songs including "Walk On By" (1963),[8] and Phil Spector's Wall of Sound production had made use of diverse and unusual instrumentation, including many associated with classical music.[9] The British group The Zombies, with their single "She's Not There" released in 1964, are often cited as an early example of the sub-genre, but, although the song had many of the harmonic qualities of later baroque pop, it did not use classical instrumentation.[2]

In 1965 The Beatles benefited from the classical music skills of George Martin, who used a string quartet in the production of "Yesterday," and for "In My Life" recorded the piano solo at a twice slower tempo and then sped it up, effectively giving off a more Renaissance-Baroque era harpsichord sound.[10] Brian Wilson began to use orchestral arrangements, melodies and harmonies on The Beach Boys' 1965 albums Today! and Summer Days (And Summer Nights!!) with harpsichord and zither, among other instruments.[11][12] The Byrds first single "Mr Tambourine Man" (1965), opens with a distinctive, Bach-inspired guitar introduction played by Roger McGuinn.[13][14] The abovementioned single by the Zombies inspired New York musician Michael Brown to form The Left Banke, whose 1966 single "Walk Away Renée" used harpsichord and a string quartet, and is usually considered the first recognizable baroque pop single.[2] In 1966 The Rolling Stones released "Lady Jane", featuring Brian Jones on dulcimer in a very baroque-sounding song.[10] The Beatles' 1966 album Revolver featured baroque instrumentation on songs such as "For No One" and "Eleanor Rigby"; which both featured idiosyncratic and lonely lyrics.[15][16] Perhaps the most influential work in the sub-genre was the use of revolutionary and symphonic compositions on The Beach Boys' 1966 masterpiece Pet Sounds with "God Only Knows" and "Caroline No"; both featured surreal and melodramatic lyrics and arrangements.[17] The single "Wouldn't It Be Nice", contained baroque instrumentation that was light years away from their past efforts.[18][10] In Britain The Yardbirds, with Jeff Beck as their guitarist, also began to find unconventional musical tastes such as jazz and baroque, along with their Gregorian chant and world music influences.[19][20] 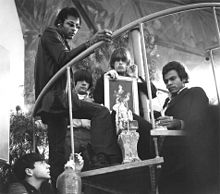 Love pictured around 1967 when they adopted a Baroque pop style

Baroque-influenced music reached a brief peak in popularity between the beginnings of the decline of psychedelia from about 1967 and the rise, particularly in Britain, of progressive rock, which absorbed wider classical influences, growing in popularity from the early 1970s.[2] Classical influence can be seen on The Beatles' 1967 album Sgt. Pepper's Lonely Hearts Club Band with "A Day in the Life" and "She's Leaving Home" and the White Album (1968) with the parody "Piggies".[21][22] Led by Arthur Lee, with a little help from Bryan MacLean, Love began playing around with baroque influences in their second album Da Capo (1967) but were overshadowed by their louder and punky recordings.[23][24] Love's early work started to give way for a more gentle, contemplative, and organic orchestral sound on their third album Forever Changes (1967) with "Andmoreagain" and "Alone Again Or".[25]

These influences can be heard on The Moody Blues' Days of Future Passed (1967), The Zombies' Odessey and Oracle (1968), The Kinks' The Kinks Are the Village Green Preservation Society (1968) and the Bee Gees' Odessa (1969); in singles like Honeybus' "I Can't Let Maggie Go" (1968).[2] Procol Harum's "A Whiter Shade of Pale" (1967) became a progressive rock standard with its baroque styled introduction, influenced by Bach pieces such as "Sleepers, Wake!" and "Air on the G String". But contrary to popular belief, the song is not a direct copy or paraphrase of any music by Bach, although it makes clear references to both pieces.[26] In this period a number of folk artists incorporated Baroque influences and classical orchestration into their albums, most notably Judy Collins on In My Life (1966) and Wildflowers (1967), and Joan Baez on Joan (1967) and Baptism (1968).[27]

Andrew Bird with violin, performing in 2009

Baroque pop and rock subsided in the 1970s as punk, disco, heavy metal and electronic music dominated, but began to be revived during the 1980s in the work of bands like R.E.M.[28] Modern baroque pop, characterized by an infusion of orchestral arrangements or classical style composition, is generally within an indie setting, and can be seen as a reaction to the lo-fi production that dominated in the 1990s.[3] Sometimes traditional pop instrumentation is discarded entirely. Many baroque pop artists of the past two decades can also be classified under several different genres, including indie rock, alternative rock, folk, Americana, Britpop, psychedelia and dream pop.

Chamber pop, also known as chamber rock, originated in the United Kingdom in the 1990s as a "reaction" against much of the alternative rock and grunge-based music of the time.[3] Chamber pop grew out of a growing distaste in the popular music trends of the period, especially the low fidelity and raw aesthetic of the alternative rock-based genres, which were highly popular at the time.[3] It desired to return to the elegance and classically-based style of the Baroque pop music of the 1960s. By refusing any form of coarseness, aggressiveness or kitsch tendencies, chamber pop refuted the styles associated with alternative rock and electronic music.[3] Chamber pop and rock music has a lot in common with 60s Baroque pop, including its evident classical influences, sophisticated productions and refined aesthetic. Whilst electronic and synthesized instruments were commonly available in the 90s, chamber pop put an emphasis on live instrumentation and orchestration over synthesized backgrounds. Common characteristics of chamber pop include lush instrumentation created by horns and stringed instruments,[3] as well as intricate and complex melodies. In part, chamber pop was also influenced by the lounge revivalism which swept throughout the decade.