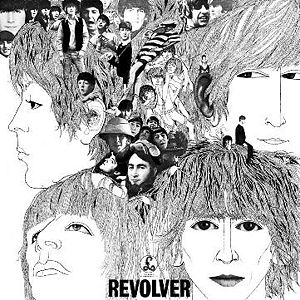 
"Revolver" is the seventh album by English rock band , released on . The album showcased a number of new stylistic developments which would become more pronounced on later albums. Many of the tracks on "Revolver" are marked by an electric guitar-rock sound, in contrast with their previous, inspired "". It reached #1 on the UK chart for seven weeks and #1 on the U.S. chart for six weeks.

"Revolver" was released before the Beatles' last tour in August 1966, but they did not perform songs from the album live. Their reasoning for this was that many of the tracks on the album, for example "Tomorrow Never Knows", were too complex to perform with live instruments. [Because some of the parts of some songs were played "backwards" through tape manipulation, and in the case of "Tomorrow Never Knows", were manufactured in the studio with tape loops.]

Melodic diversity and innovation in the studio

A key production technique used for the first time on this album was (ADT), invented by engineer Ken Townsend on . This technique used two linked s to automatically create a doubled vocal track. The standard method was to double the vocal by singing the same piece twice onto a tape, a task Lennon particularly disliked. The Beatles were reportedly delighted with the invention, and used it extensively on "Revolver." ADT quickly became a standard pop production technique, and led to related developments, including the artificial .

"", one of 's songs on the album, was released as a single (in a double A-side with "Yellow Submarine") concurrently with the album. The song contains McCartney's lyrical imagery and a string (scored by under McCartney's direction), which was inspired by the score for 's film "Fahrenheit 451". The strings were recorded without , and compressed, giving a stark, urgent sound. The song is perhaps unique amongst Beatles' songs for having a lyric idea contributed by each Beatle. contributed the line "Father Mackenzie, reading a sermon that no-one will hear." [cite web | last = | first = | url = http://www.bbc.co.uk/pressoffice/pressreleases/stories/2004/10_october/22/ringo.shtml | title = Ringo Starr Reminisces About The Boys in the Band | format = | work = | publisher = | accessdate = 2007-11-19] It was originally written as "Father McCartney" but was changed as it was thought that listeners would assume that it referred to Paul's father. So, after looking through a local phone book, he found the name McKenzie.

Lennon was the main writer of "". He and Harrison played the notes for the (and for the second guitar in the solo) in reverse order, then reversed the tape and mixed it in. The backwards guitar sound builds the sleepy, ominous, and weeping tone of the song.

The Beatles' unfolding innovation in the reaches its with the album's final track. Lennon's "Tomorrow Never Knows" was one of the first songs in the emerging genre of , and included such groundbreaking techniques as reverse guitar, processed vocals and looped tape effects. Musically, it is drone-like, with a strongly , repetitive drum-beat, and is considered to be among the earliest precursors of . The lyrics were inspired by the , although the title itself came from one of Starr's inadvertently amusing turns of phrase, playfully called "Ringoisms" (another being "").

Much of the consists of a series of prepared s, stemming from Lennon's and McCartney's interest in and experiments with and "" techniques at that time. According to Beatles session chronicler , Lennon and McCartney prepared a series of loops at home, and these then were added to the pre-recorded backing track. This was reportedly done live in a single , with multiple tape recorders running simultaneously, some of the longer loops extending out of the and down the corridor.

Lennon's processed lead vocal was another innovation. Always in search of ways to enhance or alter the sound of his voice, he gave a directive to EMI engineer that he wanted to sound like he was singing from the top of a high mountain. Emerick solved the problem by splicing a line from the recording console into the studio's , giving Lennon's vocal its ethereal, filtered quality (he was later reprimanded by the studio's management for doing this).

There are several noticeable differences between the stereo and mono mixes of "Tomorrow Never Knows." The opening drone fades in more gradually in the stereo version than in the mono mix. The tape loops fade in and out at different times, and the protracted one that serves as the song's instrumental break is heavily treated with ADT in the mono mix, lending it further distortion and intensity.

Lennon's other contributions included "" and "", both of which are guitar-laden tracks with swirling melodies.

According to Lennon, some of the lyrics of "" were taken almost verbatim from a conversation he had with actor in August 1965, while he (Lennon), Harrison and Starr were under the influence of at their rented house in (in , California). During a conversation, Fonda said "I know what it's like to be dead," because as a boy he had almost died from a self-inflicted . Fact|date=June 2008

McCartney also contributed "" a melancholy song featuring him playing and a horn solo played by , "" written in the style of , and "".

"Revolver" was also a breakthrough album for Harrison as a , and he contributed three songs on "Revolver," including the opening track, "". The is actually played by McCartney. The "Mr. Wilson" and "Mr. Heath" referred to in the lyrics (right after the word "taxman") are and , who were, respectively, the British Labour Prime Minister, and Conservative Leader of the Opposition at the time. In the "" version, "Mr. Wilson and Mr Heath" were replaced with "Anybody got a little money." The song was a protest against the high marginal rates of paid by high earners like the Beatles, which were sometimes as much as 95 percent of their income. (This would lead to many top musicians becoming s in later years.)

Harrison also wrote "", about his difficulty expressing himself in words. "" marked a significant expansion of his burgeoning interest in Indian music and the , which started with "" on "Rubber Soul". It was the intro to "Love You To" that was playing in the background when the Harrison character first appears in "Yellow Submarine", the Beatles movie released in 1968.

The most light-hearted track on "Revolver" is the childlike "Yellow Submarine." McCartney said that he wrote "Yellow Submarine" as a children's song for Starr to sing. With the help of their EMI production team, the Beatles stock s they found in the studio tape library. ( had collected these for his production of recordings of the British radio comedy programme "".Fact|date=June 2008)

In 1972, Lennon offered some context for the influence of drugs on the Beatles' creativity (quoted in ""):

The cover illustration was created by German-born bassist and artist , one of the Beatles' oldest friends from their days at the Star Club in . Voormann's illustration, part line drawing and part , included photographs by Robert Whitaker, who also took the back cover photographs and many other images of the group between 1964 and 1966, such as the infamous "butcher cover" for "". Voormann's own photo as well as his name (Klaus O. W. Voormann) is worked into Harrison's hair on the right-hand side of the cover. In the "Revolver" cover appearing in his artwork for "", he replaced this image with a more recent photo. Harrison's "Revolver" image was seen again on his single release of "" along with an updated version of the same image.

The title "Revolver", like "Rubber Soul" before it, is a pun, referring both to a kind of handgun as well as the "revolving" motion of the record as it is played on a turntable. The Beatles had a difficult time coming up with this title. According to Barry Miles in his book "Paul McCartney: Many Years from Now", the title that the four had originally wanted was "Abracadabra," until they discovered that another band had already used it. After that, opinion split: Lennon wanted to call it "Four Sides of the Eternal Triangle" and Starr jokingly suggested "After Geography", playing on ' recently released "Aftermath" LP. Other suggestions included "Magical Circles", "Beatles on Safari", "Pendulum", and, finally, "Revolver," whose wordplay was the one that all four agreed upon. The title was chosen while the band were on tour in in June–July 1966. Due to security measures, they spent much of their time in their Hilton hotel room; the name "Revolver" was selected as all four collaborated on a large psychedelic painting. [Irvin, Jim. "Different Strokes". Originally published in "Mojo", reprinted in: Paul Trynka (ed.)]

All tracks are credited to , except where noted.

The original U.S. LP release of "Revolver" marked the last time Capitol would alter an "established" UK Beatles album for the U.S. market. As three of its tracks — "I'm Only Sleeping", "And Your Bird Can Sing" and "Doctor Robert" — had been used for the earlier "" Capitol compilation, they were simply deleted in the U.S. version, yielding an 11 track album instead of the UK version's 14 and shortening the time to 28:20. The era standardizes this album to the original UK configuration. Having been available only as an import in the US in the past, the 14 track UK version of the album was also issued domestically in the US on LP and cassette on , .

"Revolver" is often cited as one of the greatest albums in rock music history.

* [http://www.geocities.com/~beatleboy1/dba07revol.html Beatles comments on each song]
* [http://www.norwegianwood.org/beatles/disko/uklp/revolver.htm Recording data and notes on mono/stereo mixes and remixes]
* [http://www.revolverbook.co.uk A free ebook about the making of Revolver]