String instruments can be divided in three groups. 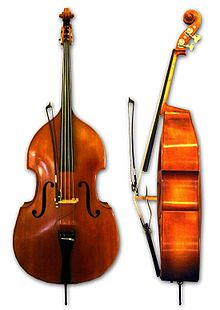 The double bass is either plucked (pizzicato) or bowed (arco) depending on the genre and piece.

All string instruments produce sound from one or more vibrating strings, transferred to the air by the body of the instrument (or by a pickup in the case of electronically amplified instruments). They are usually categorized by the technique used to make the strings vibrate (or by the primary technique, in the case of instruments where more than one may apply.) The three most common techniques are plucking, bowing and striking.

Plucking is used as the sole method of playing on instruments such as the banjo, guitar, harp, lute, mandolin, oud, sitar, and either by a finger or thumb, or by some type of plectrum. This category includes the keyboard instrument the harpsichord, which formerly used feather quills (now plastic plectra) to pluck the strings.

Instruments normally played by bowing (see below) may also be plucked, a technique referred to by the Italian term pizzicato.

Bowing (Italian: Arco) is a method used in some string instruments, including the violin, viola, cello, and the double bass (of the violin family) and the old viol family. The bow consists of a stick with many hairs stretched between its ends. Bowing the instrument's string causes a stick-slip phenomenon to occur, which makes the string vibrate.

Rarely, the guitar can be played with a bow (rather than plucked) for unique effects.

The third common method of sound production in stringed instruments is to strike the string.

Violin family string instrument players are occasionally instructed to strike the string with the side of the bow, a technique called col legno. This yields a percussive sound along with the pitch of the note. A well-known use of col legno for orchestral strings is the Gustav Holst's "Mars" movement from The Planets suite.

The aeolian harp employs a very unusual method of sound production: the strings are excited by the movement of the air.

Some instruments that have strings have attached keyboards that the player uses instead of directly manipulating the strings. These include the piano, the clavichord, and the harpsichord.

With these keyboard instruments too, the strings are occasionally plucked or bowed by hand. Composers such as Henry Cowell wrote music which asks for the player to reach inside the piano and pluck the strings directly, or to "bow" them with bow hair wrapped around the strings, or play them by rolling the bell of a brass instrument such as a trombone on the array of strings.

Other keyed string instruments, small enough for a strolling musician to play, include the plucked autoharp, the bowed nyckelharpa, and the hurdy gurdy, which is played by cranking a rosined wheel.

Steel-stringed instruments (such as the guitar, bass, violin, etc.) can be played using a magnetic field. An E-Bow is small hand-held battery-powered device which can be used to excite the strings of an electric guitar. It provides a sustained, singing tone on the string which is magnetically vibrated.

3rd Bridge is a plucking method where the string is divided in two pieces and struck at the side which is unamplified. The technique is mainly used on electric instruments, because these have a pickup that amplifies only the local string vibration. It's possible on acoustic instruments as well, but lesser convenient. For instance press on the 7th fret on a guitar and pluck it at the head side and a tone will resonate at the opposed part. At electric instruments this technique can generate multitone sounds remniscent of a clock or a bell.

Changing the pitch of a vibrating string

There are three ways to change the pitch of a vibrating string. String instruments are tuned by varying the strings' tension because adjusting length or mass per unit length is impractical. Instruments with a fingerboard are then played by adjusting the length of the vibrating portion of the strings. The following observations all apply to a string that is infinitely flexible strung between two fixed supports. Real strings have finite curvature at the bridge and nut, and the bridge, because of its motion, are not exactly nodes of vibration. Hence the following statements about proportionality are (usually rather good) approximations.

A string twice as long will produce a tone of half the frequency (one octave lower).

A string that is has a higher mass per unit length will produce a lower pitch.

This is the length of the string from nut to bridge on bowed or plucked instruments and ultimately determines the distance between different notes on the instrument. For example, a double bass with its low range needs a scale length of around 42 inches (110 cm), whilst a violin scale is only about 13 inches (33 cm). On the shorter scale of the violin, the left hand may easily reach a range of slightly more than two octaves without shifting position, while on the bass' longer scale, a single octave or a ninth is reachable in lower positions. 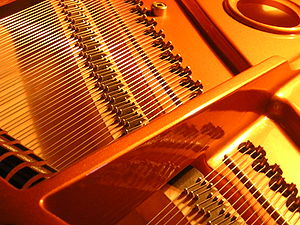 The strings of a piano

In bowed instruments, the bow is normally placed perpendicularly to the string, at a point half way between the end of the fingerboard and the bridge. However, different bow placements can be selected to change timbre. Application of the bow close to the bridge (known as sul ponticello) produces an intense, sometimes harsh sound, which acoustically emphasizes the upper harmonics. Bowing above the fingerboard (sul tasto) produces a purer tone with less overtone strength, emphasizing the fundamental, also known as flautando, since it sounds less reedy and more flute-like.

Similar timbral distinctions are also possible with plucked string instruments by selecting an appropriate plucking point, although the difference is perhaps more subtle.

In keyboard instruments, the contact point along the string (whether this be hammer, tangent, or plectrum) is a choice made by the instrument designer. Builders use a combination of experience and acoustic theory to establish the right set of contact points.

A string at a certain tension and length will only produce one note, so to obtain multiple notes, string instruments employ one of two methods. One is to add enough strings to cover the range of notes desired; the other is to allow the strings to be stopped. The piano and harp are examples of the former method, where each note on the instrument has its own string or course of multiple strings. (Many notes on a piano are strung with a "choir" of three strings tuned alike.)

Some zithers combine stoppable (melody) strings with a greater number of "open" harmony or chord strings. On instruments with stoppable strings, such as the violin or guitar, the player can shorten the vibrating length of the string, using their fingers directly (or more rarely through some mechanical device, as in the nyckelharpa or the hurdy gurdy). Such instruments usually have a fingerboard attached to the neck of the instrument, that provides a hard flat surface athe player can stop the strings against. On some string instruments, the fingerboard has frets, raised ridges perpendicular to the strings that stop the string at precise intervals, in which case the fingerboard is also called a fretboard.

Moving frets during performance is usually impractical. The bridges of a koto, on the other hand, may be moved by the player, occasionally in the course of a single piece of music. Many modern Western harps include levers, either directly moved by fingers (on Celtic harps) or controlled by foot pedals (on orchestral harps), to raise the pitch of individual strings by a fixed amount. The middle Eastern zither, the qanun, is equipped with small levers called mandal that allow each course of multiple strings to be incrementally retuned "on the fly" while the instrument is being played. These levers raise or lower the pitch of the string course by a microtone, less than a half step.

Some instruments are employed with sympathetic strings, additional strings not meant to be plucked. These strings resonate along with the played notes. This system is for instance present on a sarangi.

It is sometimes said that the sounding board or soundbox "amplifies" the sound of the strings. Technically speaking, no amplification occurs, because all of the energy to produce sound comes from the vibrating string. What really happens is that the sounding board of the instrument provides a larger surface area to create sound waves than that of the string. A larger vibrating surface moves more air, hence produces a louder sound.

Achieving a tonal characteristic that is effective and pleasing to the player's and listener's ear is something of an art, and the makers of string instruments often seek very high quality woods to this end, particularly spruce (chosen for its lightness, strength and flexibility) and maple (a very hard wood). Spruce is used for the sounding boards of instruments from the violin to the piano.

Acoustic instruments can also be made out of artificial materials, such as carbon fiber and fiberglass (particularly the larger instruments, such as cellos and basses).

In the early 20th century, the Stroh violin used a diaphragm-type resonator and a metal horn to project the string sound, much like early mechanical gramophones. Its use declined beginning about 1920, as electronic amplification came into use.

Most string instruments can be fitted with piezoelectric or magnetic pickups to convert the string's vibrations into an electrical signal that is amplified and then converted back into sound by loudspeakers. Some players attach a pickup to their traditional string instrument to "electrify" it. Another option is to use a solid-bodied instrument, which reduces unwanted feedback howls or squeals.

Amplified string instruments can be much louder than their acoustic counterparts, which allows them to be used in relatively loud rock, blues, and jazz ensembles. Amplified instruments can also have their amplified tone modified by using electronic effects such as distortion, reverb, or wah-wah.

Bass-register string instruments such as the double bass and the electric bass are amplified with bass instrument amplifiers that are designed to reproduce low-frequency sounds. To modify the tone of amplified bass instruments, a range of electronic bass effects are available, such as distortion and chorus.