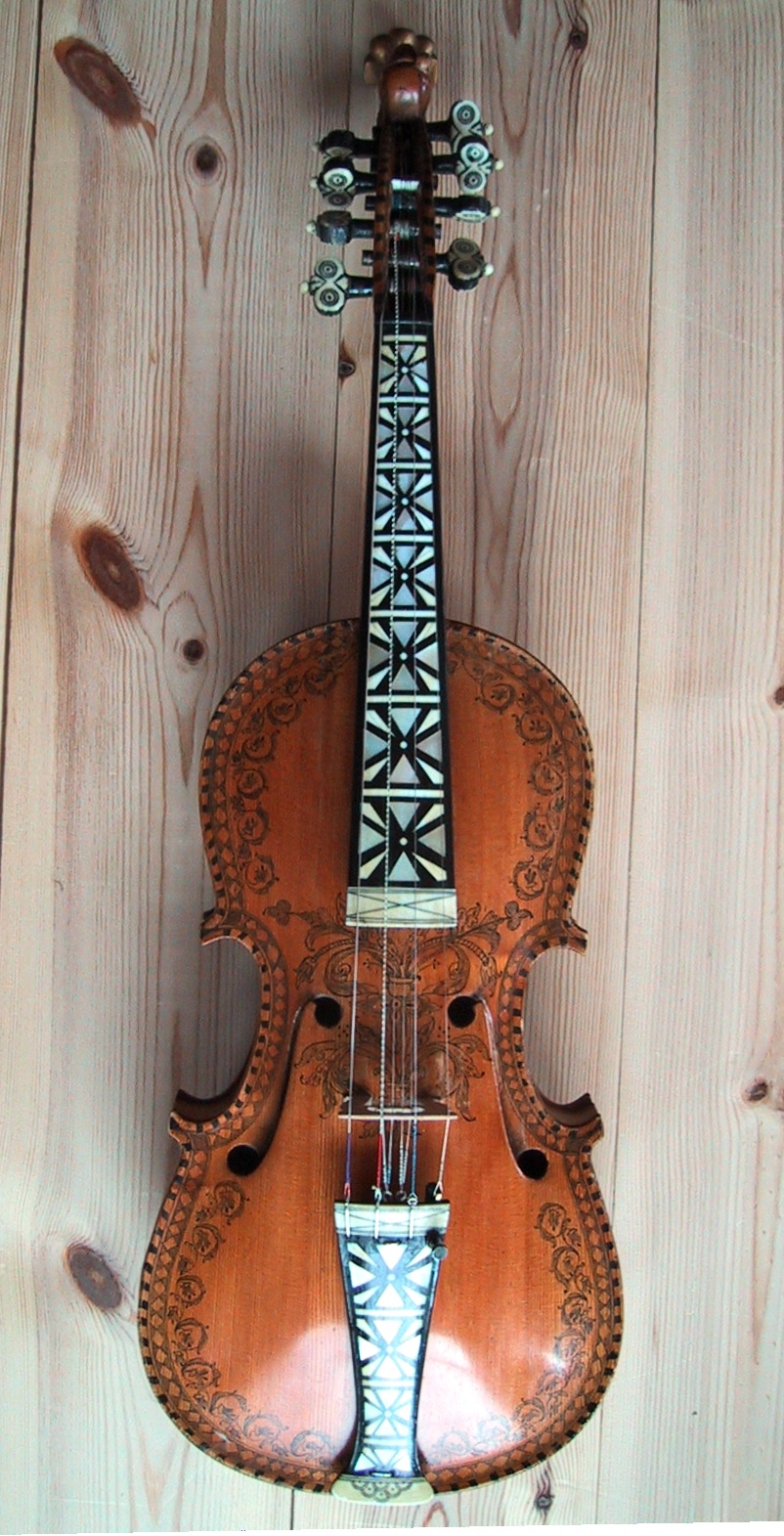 A Hardanger fiddle (or in _no. hardingfele) is a traditional used originally to play the . In modern designs, the instruments are very similar to the , though with eight or nine strings and thinner . Four of the strings are strung and played like a violin, while the rest, aptly named understrings or , under the influence of the other four, providing a pleasant haunting, echo-like sound.

The Hardingfele is used mainly in the south west part of Norway, whereas the ordinary violin (called 'flatfele' - 'flat fiddle' or 'vanlig fele' - 'common fiddle') is found elsewhere. The Hardingfele is used for dancing, accompanied by rhythmic loud foot stomping. It was also traditional for the fiddler to lead the bridal procession to the church.

The instrument often is highly decorated, with a carved animal (usually the Lion of Norway) or a carved woman's head as part of the at the top of the , extensive on the and , and black ink decorations called 'rosing' on the body of the instrument. Sometimes pieces of are used to decorate the pegs and the edges of the instrument.

The earliest known example of the hardingfele is from , made by Ole Jonsen Jaastad in , .Fact|date=July 2007 Originally, the instrument's appearance was significantly different.Nonspecific|date=July 2007 Around the year , the modern layout with a body much like the violin became the norm.

:"See also "Scordatura" in folk musicThe instrument is tuned higher than a violin, becauseFact|date=July 2007 it is considered to sound better in a higher range. The 'A' on the hardingfele corresponds to BMusic|flat (about 466 ) or higher on a standard . The notes given below for tunings are therefore relative to the A on the Hardingfele, not to A equal to 440 .The understrings are tuned to vibrate according to the main tuning. For example, when the main strings are tuned A-D-A-E, the understrings are tuned B-D-E-FMusic|#-A. The tuning largely depends on the in which the instrument is being played, or the requirements of a particular tune.

In Norway, about 40 different tunings are recorded.Fact|date=July 2007 Most hardanger tunes are played in a common tuning (A-D-A-E). The hardanger fiddle can also be played in "low base" (G-D-A-E), the normal violin tuning. In certain regions the "Gorrolaus" (F-D-A-E) tuning is sometimes used.

Another tuning is called " tuning" (A-E-A-CMusic|#). Troll tuning is used for the "fanitullen" tunes, also called the devil's tunes; in the district of Norway, using this particular tuning is called "greylighting", a reminder that the fiddler tuned his fiddle like this when the morning was near, and he had played himself through a number of other tunings.

Legend had itFact|date=July 2007 that the fiddler learned "fanitullen" tunes from the devil. This tuning limits the melodic range of the tunes, and is therefore sparsely used.

The technique of bowing a Hardingfele also differs from that used with a violin. It's a smoother, bouncier style of bowing, with a lighter touch. The player usually bows on two of the upper strings at a time, and sometimes three. This is made easy by the relative flatness of the bridge, unlike the more curved bridge on a violin. The strings of the fiddle are slimmer than those of the violin, resembling the strings of violins from the period.

Tunes and techniques of playing differ a great deal between different regions in Norway. This is probably because Norway consists of a series of valleys separated by mountains, and communities were isolated from each other in the past.Fact|date=July 2007

Standard musical notation is rarely used by the traditional players. But to preserve the music, and to get classical players to play Norwegian music, there were people who systematically transcribed tunes. They used a system where the notes corresponded to the fingering on the instrument rather than to absolute pitch. It is usual for the players in Norway not to read music, but learn tunes by ear. It is actually surprisingly common for players to not even be able to read notes. In later years, however, some fiddlers use manuscripts as a kind of "second-hand" source, for refreshing their memories.

The Hardanger Fiddle and Religion

The Hardingfele has had a long history with the Christian church. Well known early fiddle maker Isak Botnen is said to have learned some of his craft from church lay leader and school master Lars Klark, as well as the methods for varnishing from pastor Dedrik Muus. [Sandvik 1983, p.12.] In many folktales the devil is associated with the Hardingfele, in fact many good players are said to have been taught to play by the devil. During religious revivals in the 1800s many fiddles (regular and Hardanger) [Broughton, Ellingham 1999 p.212.] were destroyed or hidden both by fiddlers and laypeople who thought "that it would be best for the soul that the fiddles be burned", as it was viewed as a "sinful instrument that encouraged wild dances, drinking and fights." [Sandvik 1983, p.13.] This happened in Norway, as well as other parts of Europe, and until the 20th century playing a Hardanger fiddle in a church building was forbidden.

adapted many Hardanger folk tunes into his compositions, and composed tunes for the Hardanger as part of his score for 's "". For example, it is widely believedWho|date=July 2007 that the opening phrase of "Morning" from Grieg's "Peer Gynt" music is derived from the tuning of the sympathetic strings of the Hardanger fiddle: A FMusic|# E D E FMusic|# and so on. The main theme from Grieg's piano concerto is saidWho|date=July 2007 to be inspired of a version of the tune Fanitullen, played by a fiddler from .

In recent years the instrument has gained recognition in the rest of the world. Japan has been one of the countries that has found an interest in the hardingfele and Japanese musicians travel to Norway just to learn to play this instrument. In 1997, the Australian classical composer wrote the piece "Philtre" for a solo Hardanger fiddle. [cite web
url = http://nla.gov.au/anbd.bib-an42205392
title = Philtre (music): for solo retuned violin or hardanger fiddle / Liza Lim
accessdate = 2008-04-29
publisher = National Library of Australia]

The Hardanger fiddle was used in the s of ', and ' composed by , to provide the main voice for the theme. The use of the hardanger fiddle in this movie, however, is far from traditional since the theme does not make noticeable use of the usual practice of bowing on two strings at a time for harmony.

The Hardanger fiddle also features in the soundtrack of "Fargo", written by . Here the context is a little more traditional. The main theme it plays is an arrangement of a Norwegian folksong entitled "The Lost Sheep".

In the Japanese animated movie "Tales from Earthsea" it is played by .