The clavichord is a European stringed keyboard instrument known from the late Medieval, through the Renaissance, Baroque and Classical eras. Historically, it was widely used as a practice instrument and as an aid to composition, not being loud enough for larger performances. The clavichord produces sound by striking brass or iron strings with small metal blades called tangents. Vibrations are transmitted through the bridge(s) to the soundboard. The name is derived from the Latin word clavis, meaning "key" (associated with more common clavus, meaning "nail, rod, etc.") and chorda (from Greek χορδή) meaning "string, especially of a musical instrument".

The clavichord was invented in the early fourteenth century.[1][2] In 1504, the German poem Der Minne Regeln mentions the terms clavicimbalum (a term used mainly for the harpsichord) and clavichordium, designating them as the best instruments to accompany melodies. 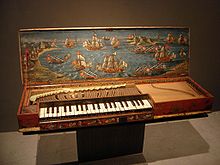 One of the earliest references to the clavichord in England occurs in the privy-purse expenses of Elizabeth of York, queen of Henry VII, in an entry dated August 1502:

Item. The same day, Hugh Denys for money by him delivered to a stranger that gave the queen a payre of clavycordes. In crowns form his reward iiii libres.[4]

It was very popular from the 16th century to the 18th century, but mainly flourished in German-speaking lands, Scandinavia, and the Iberian Peninsula in the latter part of this period. It had fallen out of use by 1850. In the late 1890s, Arnold Dolmetsch revived clavichord construction and Violet Gordon-Woodhouse, among others, helped to popularize the instrument. Although most of the instruments built before the 1730s were small (four octaves, four feet long), the latest instruments were built up to seven feet long with a six octave range.[citation needed]

Today clavichords are played primarily by Renaissance, Baroque, and Classical music enthusiasts. They attract many interested buyers, and are manufactured worldwide. There are now numerous clavichord societies around the world, and some 400 recordings of the instrument have been made in the past 70 years. Leading modern exponents of the instrument include Derek Adlam, Christopher Hogwood, Richard Troeger, and Miklos Spányi.

The clavichord has also gained attention in other genres of music, in the form of the clavinet, which is essentially an electric clavichord which uses a magnetic pickup to provide a signal for amplification. Stevie Wonder uses a clavinet in many of his songs, such as "Superstition" and "Higher Ground". A clavinet played through an instrument amplifier with guitar effect pedals is often associated with funky, disco-infused 1970s rock.

Guy Sigsworth has played clavichord in a modern setting with Björk, notably on the studio recording of "All Is Full of Love". Björk also made extensive use of and even played the instrument herself on the song "My Juvenile" of her 2007 album Volta.

Tori Amos uses the instrument on "Little Amsterdam" from the album Boys for Pele and on the song "Smokey Joe" from her 2007 album American Doll Posse. Amos also featured her use of the clavinet on her 2004 recording "Not David Bowie", released as part of her 2006 box set, A Piano: The Collection.

In 1976 Oscar Peterson played (with Joe Pass on acoustic guitar) songs from Porgy And Bess on the clavichord. Keith Jarrett also recorded an album entitled Book of Ways (1987) in which he plays a series of clavichord improvisations. The Beatles' "For No One" (1966) features Paul McCartney playing the clavichord. Rick Wakeman plays the clavichord in the track "The Battle" from the album Journey to the Centre of the Earth.

Schematic diagram of clavichord mechanism: A/B. Keys. 1A/1B. Tangents. 2A/2B. Keylevers. 3. String. 4. Soundboard. 5. Bridge-pin, next to tuning peg. 6. Damping felt, next to hitch-pin. (Note that this sketch is a simplification. In the actual instrument, the strings run perpendicular to the keylevers. In other words, the strings run lengthwise in the instrument.)[5]

In the clavichord, strings run transversely from the hitchpin rail at the left-hand end to tuning pegs on the right. Towards the right end they pass over a curved wooden bridge. The action is simple, with the keys being levers with a small brass tangent, a small piece of metal similar in shape and size to the head of a flat-bladed screwdriver, at the far end. The strings, which are usually of brass, or else a combination of brass and iron, are usually arranged in pairs, like a lute or mandolin. When the key is pressed, the tangent strikes the strings above, causing them to sound in a similar fashion to the hammering technique on a guitar. Unlike in a piano action, the tangent does not rebound from the string; rather, it stays in contact with the string as long as the key is held, acting as both the nut and as the initiator of sound. The volume of the note can be changed by striking harder or softer, and the pitch can also be affected by varying the force of the tangent against the string (known as Bebung). When the key is released, the tangent loses contact with the string and the vibration of the string is silenced by strips of damping cloth.

The action of the clavichord is unique among all keyboard instruments in that one part of the action simultaneously initiates the sound vibration while at the same time defining the endpoint of the vibrating string, and thus its pitch. Because of this intimate contact between the player's hand and the production of sound, the clavichord has been referred to as the most intimate of keyboard instruments. Despite its many (serious) limitations, including extremely low volume, it has considerable expressive power, the player being able to control attack, duration, volume, and even provide certain subtle effects of swelling of tone and a type of vibrato unique to the clavichord. 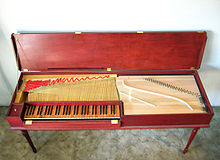 Since the string vibrates from the bridge only as far as the tangent, multiple keys with multiple tangents can be assigned to the same string. This is called fretting. Early clavichords frequently had many notes played on each string, even going so far as the keyed monochord — an instrument with only one string — though most clavichords were triple- or double-fretted. Since only one note can be played at a time on each string, the fretting pattern is generally chosen so that notes which are rarely heard together (such as C and C#) share a string pair. The advantages to this system compared with unfretted instruments (see below) include relative ease of tuning (with around half as many strings to keep in tune), greater volume (though still not really enough for use in chamber music), and a clearer, more direct sound. Among the disadvantages: temperament could not be re-set without bending the tangents; and playing required a further refinement of touch, since notes sharing a single string played in quick succession needed to be slightly separated to avoid a disagreeable deadening of the sound, potentially disturbing a legato line.

Fretted clavichord, copy of an unsigned instrument conserved in Namur, Belgium. The way the same string pair is used for several notes is clearly visible in the full size image.

Some clavichords have been built with a single pair of strings for each note. The first known reference to one was by Johann Speth in 1693 and the earliest such extant signed and dated clavichord was built in 1716 by Johann Michael Heinitz. Such instruments are referred to as unfretted whereas instruments using the same strings for several notes are called fretted. Among the advantages to unfretted instruments are flexibility in tuning (the temperament can be easily altered) and the ability to play any music exactly as written without concern for "bad" notes. Disadvantages include a smaller volume, even though many or most unfretted instruments tend to be significantly larger than fretted instruments; and many more strings to keep in tune. Unfretted instruments tend to have a sweeter, less incisive tone due to the greater load on the bridge resulting from the greater number of strings, though the large, late (early 19th century) Swedish clavichords tend to be the loudest of any of the historic clavichords. 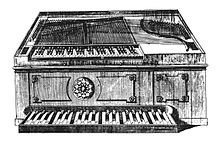 While clavichords were typically single manual instruments, they could be stacked to provide multiple keyboards. With the addition of a pedal clavichord, which included a pedal keyboard for the lower notes, a clavichord could be used to practice organist repertoire. In the era of pipe organs which used hand-pumped blowers, and of churches which were only heated during church services, organists used pedal harpsichords and pedal clavichords as practice instruments (see also: pedal piano).[6] There is speculation that some works written for organ may have been intended for pedal clavichord. An interesting case is made by Speerstra (2004) that Bach's "Eight Little Preludes and Fugues", now thought to be spurious, may actually be authentic. The keyboard writing seems unsuited to organ, but Speerstra argues that they are idiomatic on the pedal clavichord. As Speerstra and Williams (2003) also note, the compass of the keyboard parts of Bach's six organ trio sonatas BWV 525–530 rarely go below the tenor C, so could have been played on a single manual pedal clavichord, by moving the left hand down an octave, a customary practice in the 18th century. 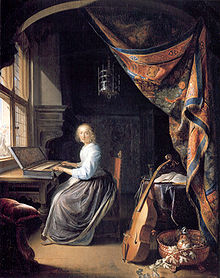 Gerard Dou, Woman at the Clavichord

Much of the musical repertoire written for harpsichord and organ from the period circa 1400–1800 can be played on the clavichord; however, it does not have enough (unamplified) volume to participate in chamber music, with the possible exception of providing accompaniment to a soft baroque flute, recorder, or single singer. J. S. Bach's son Carl Philipp Emanuel Bach was a great proponent of the instrument, and most of his German contemporaries regarded it as a central keyboard instrument, for performing, teaching, composing and practicing. Among recent clavichord recordings, those by Christopher Hogwood (The Secret Bach, The Secret Handel, and, most recently, The Secret Mozart), break new ground. In his liner notes, Hogwood points out that these composers would typically have played the clavichord in the privacy of their homes. The English composer Herbert Howells (1892–1983) wrote two significant collections of pieces for clavichord (Lambert's Clavichord & Howells' Clavichord).