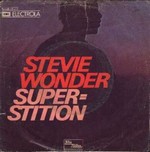 Wonder had actually written this song for , but at the insistence of his own manager, Wonder himself recorded it first. Beck was instead offered "Cause We've Ended As Lovers", which he recorded for 1975's "". Jeff Beck played guitar on "Talking Book" and later recorded his own version of "Superstition" with .

Wonder's music had been undergoing a marked change from his earlier Motown pop to a more personal style. This shift had been evident on his two prior albums, but it was "Talking Book", and "Superstition" in particular that brought the new style to the awareness of the public in general.

The song deals with s, and mentions several popular superstitious fables in its lyrics:

The chorus contains some advice:

"Superstition" is immediately recognizable for its opening drum beat, which was performed by Wonder, and for its notably y . The song also heavily features and s, notably a trumpet lead by Trevor Laurence, and the electronic Arp and Moog sounds that and helped to create for the album.

The song has also been covered by , , and . (Vaughan and Wonder had mutual admiration for one another; Wonder would later write the song "Stevie Ray Blues" in honor of Vaughan). covered the song on the fifth season of , and his version was included on the CD. The song is also covered by along with on Panic's 2000 release "". The song was also mixed by in the song "Karma (Karmastition Remix)".

Vaughan would produce a humorous music video for his cover version: the video has Vaughan performing several acts which, according to superstitious lore, should bring him bad luck &ndash; breaking a mirror, knocking a horseshoe from its upright position to an inverted one (which supposedly causes all the luck to run out), stepping on a sidewalk crack, walking under a ladder, performing on Friday the 13th, and having a black cat cross his path). The cat is repeatedly pushed aside by members of Double Trouble; whereupon the cat extracts its revenge by causing the bass guitarist to be electrocuted, the keyboardist to fall through a trap door, and the drummer to be knocked out by a falling stage light. Only Vaughan remains standing at the end of the video, whereupon the cat returns to the arms of its "owner" &ndash; who turns out to be none other than Stevie Wonder, the song's original singer/writer who makes a cameo appearance in the video.

Uses in other media