A 12th century manuscript depicting musicians with various instruments such as Oud.

The origin of the name oud (and its etymological cousin, lute) for the musical instrument is uncertain, but the Arabic العود (al-ʿūd) refers literally to a thin piece of wood similar to the shape of a straw, and may refer to the wooden plectrum traditionally used for playing the oud,[2] to the thin strips of wood used for the back, or to the wooden soundboard that distinguished it from similar instruments with skin-faced bodies.[3] Recent research by Eckhard Neubauer suggests that oud may simply be an Arabic borrowing from the Persian name rud, which meant string, stringed instrument, or lute.[4][5]

The Arabic definite article al- was not retained when al-ʿūd was borrowed into Turkish, nor was the letter ʿayn, the sound of which (a voiced pharyngeal fricative) does not exist in Turkish. The resulting Turkish word is simply ud (with a pronunciation similar to the word good without the g).

The oud was most likely introduced to Western Europe by the Arabs who established the Umayyad Caliphate of Al-Andalus on the Iberian Peninsula in 711. Oud-like instruments such as the Ancient Greek Pandoura and the Roman Pandura likely made their way to the Iberian Peninsula much earlier than the oud. However, it was the royal houses of Al-Andalus that cultivated an environment that raised the level of oud playing to greater heights and boosted the popularity of the instrument. The most famous oud player of Al-Andalus was Ziryab. He established a music school in Córdoba, enhanced playing technique and added a fifth course to the instrument. The European version of this instrument came to be known as the lute – luth in French, Laute in German, liuto in Italian, luit in Dutch, laúd in Spanish, and alaúde in Portuguese. The word "luthier", meaning stringed instrument maker, is in turn derived from the French luth. Unlike the oud, the European lute utilizes frets (usually tied gut).

According to Farabi, the oud was invented by Lamech, the sixth grandson of Adam. The legend tells that the grieving Lamech hung the body of his dead son from a tree. The first oud was inspired by the shape of his son's bleached skeleton.[6][not in citation given]

The oldest pictorial record of a lute dates back to the Uruk period in Southern Mesopotamia (modern Nasiriyah city), over 5000 years ago on a cylinder seal acquired by Dr. Dominique Collon and currently housed at the British Museum.[citation needed] The image depicts a female crouching with her instruments upon a boat, playing right-handed. This instrument appears many times throughout Mesopotamian history and again in ancient Egypt from the 18th dynasty onwards in long and short-neck varieties. One may see such examples at the Metropolitan Museums of New York, Philadelphia, Cleveland, and the British Museum on clay tablets and papyrus paper. This instrument and its close relatives have been a part of the music of each of the ancient civilizations that have existed in the Mediterranean and the Middle East regions, including the Sumerians, Akkadians, Persians, Kurds, Babylonians, Assyrians, Armenians,Greeks, Egyptians, and Romans. 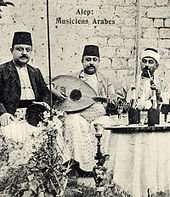 Arab musician in Aleppo, Syria with an oud circa 1915.

The ancient Turkic peoples had a similar instrument called the kopuz. This instrument was thought to have magical powers and was brought to wars and used in military bands. This is noted in the Göktürk monument inscriptions, the military band was later used by other Turkic state's armies and later by Europeans.[7] According to musicologist Çinuçen Tanrıkorur today's oud was derived from the kopuz by Turks near Central Asia and additional strings were added by them.[8]

Today's oud is totally different from the old prototypes and the Turkish oud is different from the Arabic oud in playing style and shape. The Turkish oud is derived from modifying the Arabic oud: its development has been attributed to Manolis Venios, a well known Greek luthier who lived in Istanbul in the late 19th and early 20th centuries.[citation needed] In Greece and Armenia musicians use the Turkish ouds and tunings.[citation needed]

The oud has a particularly long tradition in Iraq,[9] where a saying goes that in its music lies the country’s soul.[9] A ninth-century Baghdad jurist praised the healing powers of the instrument, and the 19th century writer Muhammad Shihab al-Din related that it "places the temperament in equilibrium" and "calms and revives hearts."[9] Following the invasion of Iraq and the overthrow of the secular Hussein regime in 2003, however, the increasing fervor of Islamic militants who consider secular music to be haraam (forbidden) forced many Oud players or teachers into hiding or exile.[9] 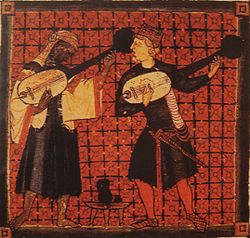 A Muslim and a Christian playing an early version of the modern guitar in Al-Andalus.

Construction of the oud is similar to that of the lute.[10] The back of the instrument is made of thin wood staves glued together on edge. Alternating staves (or ribs) of light and dark wood are often used. The instrument usually has an odd number of staves. This means the back will have a center stave rather than a center seam. Contrasting trim pieces are often used between staves. Patterns and wood species used generally vary from maker to maker. In better instruments the wood is always cut on the quarter from a dense hardwood.

The top of the oud is generally made of two matching pieces of thin spruce glued together on edge. Transverse braces, also of spruce, are glued to the underside of the top.

The neck is generally made of a single piece of wood and is usually veneered in a striped pattern similar to that of the back. The pegbox meets the neck at a severe angle. The pegbox is usually made from separate side, end and back pieces glued together.

The following are the general regional characteristics of oud types in which both the shape and the tuning most commonly differ: 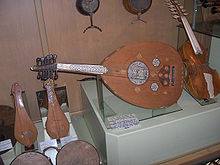 An ancient Syrian ud made by Abdo George Nahat of Damascus, inlaid with ivory and mother-of-pearl. It belonged to the famous Turkish Musician Şerif Muhiddin Targan.(Mevlâna mausoleum, Konya, Turkey)

Although the Greek instruments laouto and lavta appear to look much like an oud, they are very different in playing style and origin, deriving from Byzantine lutes. The laouto is mainly a chordal instrument, with occasional melodic use in Cretan music. Both always feature movable frets (unlike the oud). 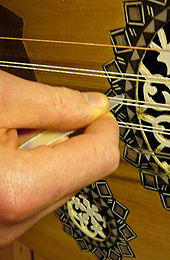 How the risha (Arab term for the pick or plectrum) of the oud is held in the palm of the hand.

The plectrum (pick) for the oud is usually a little more than the length of an index-finger. The Arabs traditionally used thin piece of wood as a plectrum, later replaced by the eagle's feather by Zyriab in Spain (between 822 to 857), other sources state that he is the first one to use the wooden plectrum.

To date the Arabic players use the historic name reeshe or risha (Arabic: ريشة‎), which literally means "feather" while Turkish players refer to it as a mızrap. Currently the plastic pick is most commonly used for playing the oud, being effective, affordable, and widely available.

Like similar strummed stringed instruments, professional oud players take the quality of their plectrums very seriously, often making their own out of other plastic objects, and taking great care to sand down any sharp edges in order to achieve the best sound possible.