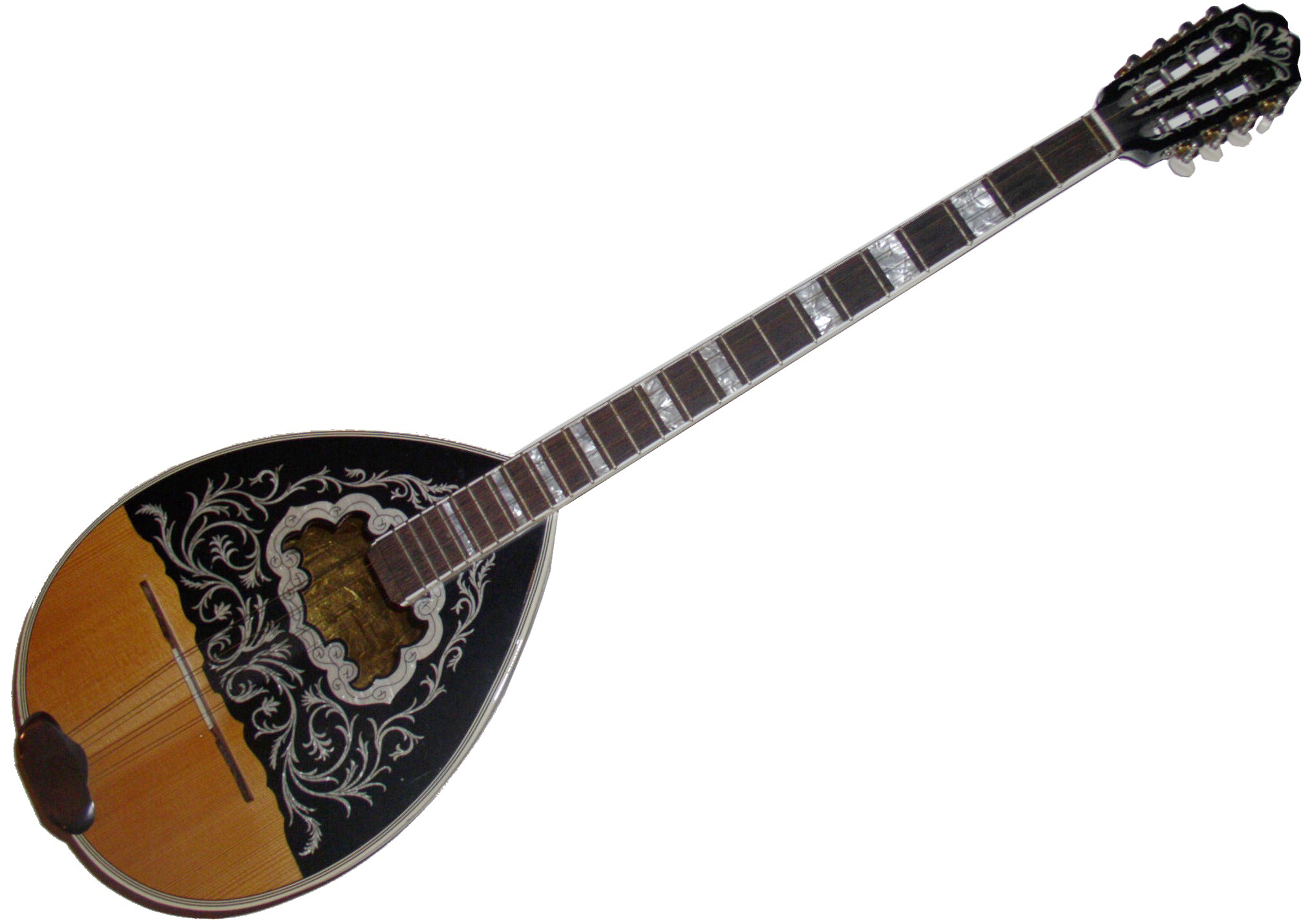 The bouzouki (gr. το μπουζούκι; pl. τα μπουζούκια) (plural sometimes transliterated as "bouzoukia") is the mainstay of modern . It is a stringed instrument with a pear-shaped body and a very long neck. The bouzouki is a member of the 'long neck ' family and is similar to a . The front of the body is flat and is usually heavily inlaid with . The instrument is played with a and has a sharp metallic sound.

Many musicians such as and began using specially designed pickups to achieve a slightly thicker -like sound in the mid-1960s. These pickups are widely used by several Greek artists today and came in active and (usually) passive versions. Bouzouki pickup manufacturers include EMG, Lace Actodyne and .

There are two main types of bouzouki:

In , this instrument was known as the or pandourion, also called the "trichordo" because it had three strings; it was the first fretted instrument known, forerunner of the various families of lutes worldwide. The source of our knowledge about this instrument is the (4th century BC, now exhibited at the ), depicting the mythical contest between and , where a pandouris is being played by a muse seated on a rock.

From Byzantine times it was called the tambouras. The modern Turkish is practically identical to the ancient Greek pandouris. On display in the National Historical Museum of Greece is the tambouras of a hero of the Greek revolution of 1821, General . This tambouras bears the main morphological characteristics of the bouzouki used by the .

The Turkish belongs to the same family of instruments as the bouzouki. A middle-sized kind of saz is called a "bozouk saz". Bozouk in Turkish means "broken, not functioning, modified". Here it is used in order to specify the size of the instrument. It is concluded, therefore, that the bouzouki has been named after the jargon of the Turkish saz. An alternative popular etymology maintains that the word "Bozouk" was used because different tunings (the Turkish 'düzen') are required for the instrument to play in different musical scales (known as Dromoi in Greek, Maqam (pl. Maqamat) in Arabic). A tuning known as the "bozouk düzeni" (broken tuning) still exists in Greek folk music.

The early bouzoukia were mostly Three-string ("Trichordo"), with three courses (six strings in three pairs) and were tuned in different ways, as to the scale one wanted to play.

After the late '50s, four-course ("Tetrachordo") bouzoukia started to appear. The four-course Bouzouki was made popular by . Chiotis also used a tuning akin to standard guitar tuning, which made it easier for guitarists to play bouzouki, even as it angered purists.

The , with four courses, a flatter back, and differently tuned from the Greek bouzouki, is a more recent development, dating back to the 1960s.

This is the classical type of bouzouki. It has fixed frets and it has 6 strings in three pairs, in modern times tuned Dd-aa-dd. This tuning was called the European tuning by , who described several other tunings, or douzenia, in his autobiography. This is the type of bouzouki that was used for . The illustrated bouzouki is a replica of a trichordo bouzouki used by . It has tuners for eight strings, but has only six strings. The luthiers of the time often used sets of four tuners on trichordo instruments, as these were more easily available, since they were used on mandolins.

This type of bouzouki has 8 metal strings which are arranged in 4 pairs, known as courses, typically tuned Cc Ff aa dd (i.e. one full note below the four high strings of a guitar). It was established in the scene by a major Rebetis, Manolis Chiotis, during the 1960s. In the two higher-pitched () courses, the two strings of the pair are tuned to the same note. In the two lower-pitched (bass) courses, the pair consists of a thick wound string and a thin string tuned an apart. These 'octave strings' add to the fullness of the sound and are used in chords and bass drones (continuous low notes that are played throughout the music).

Notable players of the Greek bouzouki