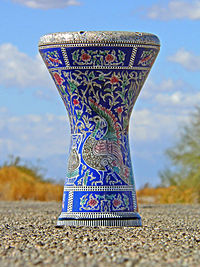 Though it is not known exactly when these drums were first made, they are known to be of ancient origin. Some say they have been around for thousands of years, used in Mesopotamian and Ancient Egyptian cultures. There has also has been some debate that they actually originated in Europe and were brought to the Middle East by nomadic Celtic tribes.

Its thin, responsive drumhead and resonance help it produce a distinctively crisp sound. Traditionally, goblet drums may be made of clay, metal, or wood. Modern goblet drums are also sometimes made of synthetic materials, including fiberglass. Modern metal drums are commonly made of aluminum (either cast, spun, or formed from a sheet) or copper. Some aluminum drums may have a mother-of-pearl inlay, which is purely decorative. Traditional drum heads were animal skin, commonly goat and also fish. Modern drums commonly use synthetic materials for drum heads, including mylar and fiberglass. 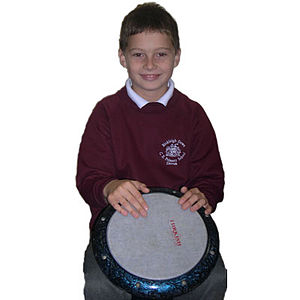 A goblet drum played between the legs 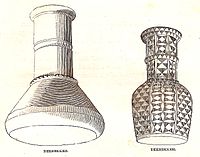 Goblet drums are played with a much lighter touch and quite different strokes (sometimes including rolls or quick rhythms articulated with the fingertips) than hand drums such as the djembe, found in Africa.

There are two main types of goblet drums. The Egyptian style has rounded edges around the head, whereas the Turkish style exposes the edge of the head. The exposed edge allows closer access to the head so finger-snapping techniques can be done, but the hard edge discourages the rapid rolls possible with the Egyptian style.

The goblet drum may be played while held under one arm (usually the non-dominant arm) or by placing it sideways upon the lap (with the head towards the player's knees) while seated. Some drums are also made with strap mounts so the drum may be slung over the shoulder, to facilitate playing while standing or dancing. It produces a resonant, low-sustain sound while played lightly with the fingertips and palm. Some players move their fists in and out of the bell to alter the tone. There are a variety of rhythms (see dumbek rhythms) that form the basis of the folkloric and modern music and dance styles of the Middle East.

There are two main sounds produced by the goblet drum. The first is called the 'doum'. It is the deeper bass sound produced by striking the head near the center with the length of the fingers and palm. The second is called the 'tek' and is the higher-pitched sound produced by hitting near the edge of the head with the fingertips. A 'tek' struck with the secondary hand is also known as a 'ka'. Additionally, there are more complex techniques including snaps, slaps, pops and rolls that are used to ornament the basic rhythm. Hand clapping and hitting the sides of the drum can be used in addition to drumhead sounds.

Another technique commonly used in Greece, Bulgaria, Turkey and Egypt is to tap with the fingers of one hand and with a thin stick in the other. In Turkey the stick is called the çubuk, which means wand, or stick. The Romani of most of the countries associated with the goblet drum use this technique.

Use in Western classical music

The first known Western classical composition to feature a goblet drum is the opera Les Troyens (1856–1858) by the French composer Hector Berlioz, which calls for a tarbuka in the Dance of the Nubian Slaves in Act IV.

A darabuka features in the Symphony No. 14, Rituals by the Finnish composer Kalevi Aho.