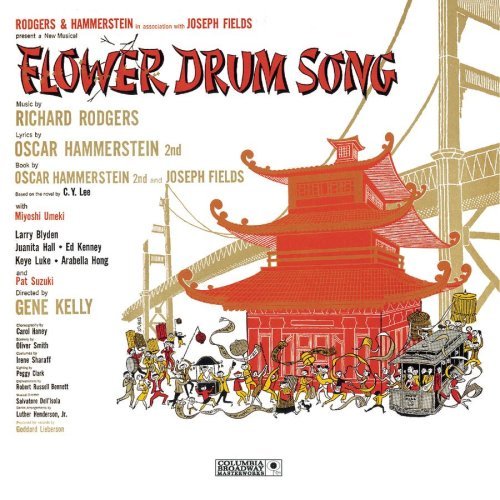 "Flower Drum Song" is a musical written by the team of , based on the 1957 novel of the same name by author C. Y. Lee. The Broadway production opened in 1958 featuring, for the first time in Broadway history, a mostly Asian cast. The musical was successful (as the novel had been), garnering six nominations and spawning a London production, national tours and a 1961 musical film, but the musical and movie would fall out of favor as the era re-defined how minorities should be portrayed on film.

Asian American playwright reworked the story and music for a 2002 Broadway revival.

After , Americans began to show an interest in the , and had explored this interest in "South Pacific" and "". The novel "Flower Drum Song" was written while Lee was a working for two San Francisco Chinatown newspapers, "Chinese World" and "Young China". It was a story of generational and cross-cultural conflict in the early 1950s. Lee had done his homework by moving to while turning his short story into the novel.

Producer Joe Fields, a high school friend of Hammerstein, had purchased the novel "Flower Drum Song" and mentioned it to the librettist at a party in New York. After Hammerstein read the book, he suggested to Rodgers that it might make a good musical. Rodgers had already read it and agreed. They also agreed on a casting innovation; an all-Asian cast, something that had not been seen before. Finding the actors proved challenging. Lee suggested going to Forbidden City nightclub, on which the musical is based, to find Asians who could sing and dance in the musical. Still, the team could not find enough Asians to fill the cast completely, and a few members of the cast were non-Asians. [ [http://www.rnh.com/theatricals/show.php?show_id=93&view=author_quotes Information from the R&H Theatricals website Background pages] ]

The story of the novel is darker than the plots of the musical and film. In the novel, Helen commits suicide, and the flower drum song is sung by a servant.

While it is revolutionary for being a show that features a virtually all Asian cast, it should also be noted for being revolutionary because it is the only musical about Asian-American characters. Other "Asian" musicals, South Pacific, , , are about Asians who live in Asia. features characters who were born in America who just happen to be Asian. This is despite the fact that the producers of the original production cast "star" non-Asians in leading roles.

The production opened for out-of-town tryouts on , in 's and had its Broadway opening at the on .

"Flower Drum Song" was the first Broadway show to feature a mostly Asian cast, including , , , , , , and Arabella Hong. was African-American (she had previously starred in "South Pacific"), and the male lead, , was non-Asian. Directed by (in his first outing as a director on Broadway) and with choreography by , "Flower Drum Song" ran for 600 performances despite some pans by critics. The show received six nominations (including a win as Best Conductor and Musical Director for Salvatore Dell'Isola) but was overshadowed that year by "Redhead", which starred and , with choreography by . [ [http://www.playbill.com/news/article/72778.html Playbill.com article "PLAYBILL ARCHIVES: Flower Drum Song — 1958"] ]

Umeki and Suzuki were featured on the cover of "Time Magazine" in December 1958. released the in 1958 in and versions; has reissued the stereo version on CD.

The musical's first London production opened at the Palace Theatre on and ran for 464 performances. The production starred Yau Shan Tung, Tim Herbert, and Kevin Scott. A London cast album was released in 1960 and re-released on CD in 1994 by EMI.

The 2002 revival opened on Broadway at the on and ran for 169 performances after 25 previews. This was after the revised musical was introduced to the public in 2001 at the Mark Taper Forum in Los Angeles, where the show received multiple nominations and wins at the 2002 Theatre Los Angeles Ovation Awards, after a sold-out run and after receiving universal praise from critics. [Check out the reviews under References near the end of this article.]

The show had a new written by , which modernized the presentation of Asian Americans, darkened the story a bit (though not as much as the original novel) but also played with the stereotypes. When the show opened in Los Angeles, critics commended the musical for making revolutionary and appropriate changes in handling the delicate racial themes of the show, but when it opened on Broadway, some critics were revolted at the very idea of touching a Rodgers and Hammerstein classic despite the dated portrayal of its characters, and panned the rewrite as oversimplifying the story and losing the warmer, lighter charm of the original book. [See, for example, [http://www.talkinbroadway.com/world/FlowerDrumSong.html this TalkinBroadway review] .] In light of the revision controversy, writer and New York University professor John Kuo Wei Tchen, in the November 2002 publication of the Maynard Institute, came out with an incisive analysis of why these critics were "crass" about the rewritten musical in his article "Flower Drum Song - The Reviews are in: Critics Clueless about New Emergent American Sensibility." [Check out the article on the web under References.]

In defending his decision to rewrite the original book, David Hwang stated, "I tried to write the book that Oscar Hammerstein would have written if he were Asian-American." "Time Magazine" hailed it one of the 10 best on Broadway for 2002. [ [http://www.time.com/time/bestandworst/2002/theater.html Time Magazine 2002 article] ] The Lincoln Center for the Performing Arts also honored the musical by videorecording it for its permanent collections.

The production was directed and choreographed by Robert Longbottom and starred as Chinese immigrant Mei Li and as Wang Ta. Although this was the shortest Broadway run for any Rodgers and Hammerstein musical, after its closing it managed to garner nominations for Best Book, Best Costume Designer, and Best Choreographer. It also collected nominations from the Outer Critics Circle, the Drama League, the Astaire Awards, Broadway.com's Audience Awards, and Broadwayworld.com's Fans' Choice Awards. While Broadway critics gave the musical mixed reviews, Salonga's presence received positive nods and nominations for Distinguished Performance from the Drama League, for Favorite Lead Actress in a Broadway Musical from Broadway.com's Audience Awards, and for Best Lead Actress in a Musical from Broadwayworld.com's Fans' Choice Awards. The cast recording was well-received and was a top contender at the 2003 s for Best Musical Show Album. The production then went on tour in the U.S. with a primarily different cast.

For the 2002 revival, Mei-Li's role is expanded. She is not a mail order bride, but arrives after escaping the communist regime using her skills in . She joins the Chinese Opera troupe of her father's old friend, Wang. The opera troupe is unprofitable, but Wang's son Ta makes money by producing Western nightclub acts on its off night. His star is the very assimilated Linda Low, who encourages Mei-Li to learn American ways. Rejected by Ta as being too traditional, Mei Li goes to work in a fortune cookie factory, becomes engaged to the owner and plans to return to China with him. A sleek talent agent, Madame Liang, convinces Wang to shut down the Chinese opera open Club Chop Suey. [ [http://www.curtainup.com/flowerdrumsong.html Information from a CurtainUp review] ]

A number of changes were made in the score (including new lyrics for several songs. One number was cut, and another cut number reinstated). Some aspects were added to the plot, including a gay character, and Helen Chao was replaced by a talent agent who is attracted to Master Wang.

The Discovering Lost Musicals Charitable trust went back to the original script when they presented a concert staging of the musical at the Lillian Baylis Studio Theatre at in the summer of 2006.

A shy young woman, Mei Li, arrives with her father in from in the early 1950s; both are s. She has come to enter into an with the owner of a Chinese nightclub, Sammy Fong, whose traditional family has insisted on the union. Sammy is a totally assimilated hipster and is already involved with his leading , Linda Low. It's clear that this naïve newcomer is the wrong girl for Sammy, and he does his best to dissuade Mei Li from marrying him. He sends her to live in the house of Master Wang, where he presents her as prospect for his friend, Master Wang's shy son, Wang Ta. Master Wang is delighted with the girl, as he is traditional and has been trying in vain to keep his children from being seduced by the American life-style. But dissolving the marriage contract will be difficult.

Meanwhile, Wang Ta is dazzled by the charms of Linda, who enjoys being a girl. Landing a date with Linda, Ta proposes marriage. Linda wants to use Wang Ta to get a real commitment from Sammy Fong, who gets wind of her plan when Linda gets another club employee to pretend to be her brother and grant his permission for Linda to marry Wang Ta. When Ta finally meets Mei Li, she quickly develops feelings for him, but he is unimpressed. When she dresses up in Western clothes, however, he warms to her. Linda shows up with her brother and claims that she will marry Ta. Master Wang forbids this, but Ta argues that he is old enough to make his own decisions, and they argue. Sammy is now in a tight spot and needs to figure out how to get Ta and Mei Li together so that he can have Linda.

Sammy arranges to have Master Wang and Ta see Low's nightclub act, where they are shocked by Linda's . They leave, distraught, and Linda argues with Sammy. Ta spends the night at the apartment of childhood friend Helen Chao, a seamstress who loves Ta, but whose love is unrequited. In the morning, Mei Li delivers Master Wang's coat for Helen to mend and is distressed to see Ta's dinner jacket on the kitchen table. Mei Li jumps to conclusions and leaves horrified. Wang leaves the lonely Helen and goes back home to admit that his father was right. But now, Mei Li wants nothing to do to him. This complicated problem must be settled by the Three Family Association. Sammy Fong announces that he and Linda have decided to get married, but the Association decrees that the wedding contract cannot be broken, and Mei Li must become Sammy's wife. Sammy tries to convince Linda that even if he is "framed" into marrying Mei Li, he will continue to love Linda.

Ta brings Mei Li a wedding gift of an old family clock, and tries unsuccessfully to hide the fact that he is deeply in love with her. The wedding procession moves down one of San Francisco's streets with the bride, heavily veiled, carried on a sedan chair. Sammy drinks from the traditional wedding goblet, then offers the goblet to his new wife. Unveiled, the bride turns out to be Linda. Mei Li announces that since entered the U.S. illegally, the marriage contract and decisions by the Association are null and void. Now Mei Li is free to marry Ta.

Many of the members of the cast of "Flower Drum Song" were only starting their careers and would go on to become among the most successful Asian actors and actresses.
* - Wang Chi Yang
* Arabella Hong - Helen Chao
* - Madame 'Auntie' Liang
* - Linda Low
* - Frankie Wing (played Sammie Fong in the 1961 film)
* - Sammy Fong
* - Mei-Li (also appeared in the 1961 film version)