A Hang (pronounced [haŋ], with vowel sound between those of the words hot and hungry) is a musical instrument in the idiophone class created by PANArt in Switzerland.[1] The Hang is made from two deep drawn, nitrided steel sheets[2] that are attached together creating the recognizable 'UFO shape'. There is nothing inside the Hang but air. The top ("Ding") side has a center 'note' hammered into it with seven or eight 'tone fields' hammered around it. The bottom ("Gu") is a simpler surface that has a rolled hole in the center with a tuned note that can be created when the rim is struck. The Hang uses some of the same physical principles as a steelpan but with a nitrided surface and structural change of having two clamped shells with a small opening so that the instrument is a Helmholtz resonator.[1][3] The creation of the Hang was the result of many years of research on the steelpan as well as the study of a diverse collection of instruments from around the world such as gongs, gamelan, ghatam, drums and bells.[4] Metallurgical and acoustic research by the makers has led to significant changes and refinement in structure, design, and process over the years since the first Hang was offered.

The Hang is sometimes referred to as a hang drum. The 'drum' label, however, is discouraged by PANArt: "Treating it as a drum and promoting the name Hang Drum, for instance, has created a ripple effect of misinformation that leads to damaged Hang, physical injury, and mental and emotional turbulence."[5] 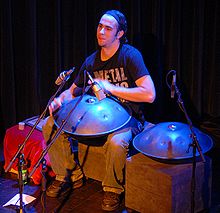 The Hang is typically played resting on the player's lap. The Hang is generally played with the hands and fingers instead of mallets. This lighter playing tends to produce a complex overtone-rich sound that could be considered 'softer' and 'warmer' than the 'bright' sound of a mallet based traditional steelpan.

The top ("Ding") side of the Hang, depending on how it is played, can sound like a harp, bells, or harmonically tuned steelpans. The notes are laid out in a cross pattern in the 'tone circle' from low to high so that with a specific orientation of the Hang, the player can ascend or descend the 'scale' by alternating using the left and right hands to strike the 'tone fields'. Each tone field has multiple overtones oriented specifically in the flattened field with a 'boss' or 'dimple' roughly at the center. Typically there is a fundamental tone, an overtone tuned to an octave above that fundamental, and an additional overtone a fifth above that octave (twelfth/tritave). The orientation is fairly consistent across the fields on each Hang so that the overtones can be highlighted, muted, or extracted based on how and where the player strikes the tone field.

The 'bottom' (Gu side) of the Hang has ghatam/udu-like properties using the Helmholtz resonance that occurs within the clamped shallow shells. In the 2nd Generation and Integral Hang adjustment of the size of the opening of the Gu 'hole' (by partially blocking it with either a hand, or the legs) can generate a sympathetic D2 from the Helmholtz resonance that activates subtle layers of cross complexities in the resonance of the instrument as notes are played on the Ding side. In the 1st and 2nd Generation models there is a single high note with a long sustain that can be generated by striking the rim of the hole on the 'Gu' side. In the Integral Hang there are two notes that can be generated (F and F#). The Hang can also be used as a friction idiophone. Shaker like sounds can be made by sliding a hand across the surface, and it can also ring like a singing bowl by using skin (a hand) or a bow.

The Hang was developed in 2000 in Berne, Switzerland by Felix Rohner and Sabina Schärer (PANArt Hangbau AG). It was introduced at the Musikmesse Frankfurt in 2001. Its name comes from the Bernese German word for hand. The two deep drawn steel hemispheres of the Hang are hardened by a process known as gas-nitriding. The side considered the 'bottom' has an opening (Gu) in the center which allows the generation of the bass note through Helmholtz resonance. When it is played in a dampened way it can change in pitch similar to a talking drum. On the 'top' are seven (in the bass version of the Hang) or eight (treble version which is no longer produced) notes arranged in a 'Tone Circle' in zig-zag fashion from low to high. All are tuned harmonically (with fundamental, octave and the fifth above the octave) around a low note (Ding) at the center of the Tone Circle. Each creation is numbered and signed.[6] 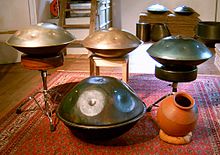 There are only two people who make Hanghang (plural form of Hang), the inventors Felix Rohner and Sabina Schärer. They have a little workshop in Berne where every Hang has been created. From 2001 to 2005 the first generation Hang was offered in multiple scales ranging from fifteen to up to 45 different 'Sound Models'. The Hang makers took their initial inspiration from ethnomusicological roots with models such as the Aeolian, Ake Bono, Hijaz, Melog, Pygmy, and Zhi Diao. In 2005 PANArt was able to lower the tones on the Hang significantly in what they referred to as the Low Hang models with the Ding tuned to F3, E3 or Eb3. In the First Generation each creation was numbered, the model 'name' was written, and a signature of either Felix Rohner or Sabina Schärer was on a small note pasted on the inside of the top (Ding) surface.

In the spring of 2006 the Hang makers presented a new generation of Hang. The New Generation instruments (often referred to as 2nd generation) have a surface coating of annealed brass over the nitrided steel as well as a ring of brass around the circumference of the Hang. From the many different scales the Hang makers reduced to a structure with one type of central note (Ding) at D3. All New Generation models have two A notes (A3 and A4) as well as another D (D4) in the Tone Circle around the Ding.[7] The remaining notes were mixed into several different configurations. Older Hanghang had tone fields with the oval indentation oriented radially towards the Ding, with the 2007 models (as well as the Integral Hang) the tone fields are angled at about 45° from a line drawn from the Ding to the edge. They also started marking the individual serial number on the inside of the Gu opening and signing each Hang at the outside edge of the Gu side of the Hang. No 'Sound Model' names were officially given to the 2nd Generation models.

In the spring of 2008 the Hang makers announced a new Hang, the Integral Hang. Numbers began again with an H in front (H1, H2, etc.) and with the first Integral Hang dated in November 2007. Several changes marked the Integral Hang. There was only one scale (D3 Ding, A3, Bb3, C4, D4, E4, F4, A4) with no other sound models/types offered. While the circumference remained a circle, the Gu side was shaped very slightly from spherical to oval. Along with that shift, the Gu hole was adjusted to a subtly oval shape and had two Gu ringing 'notes': F and an F#. Significant changes were made to the Ding (center note on the top). A circular indentation in the dome was made and has a texture of brass applied, annealed, and then lacquered. Also changes to the 'shoulder' area between the flattened area of the Ding and the notes in the tone field were implemented so that the transition was more gradual than in the 2nd generation Hanghang. The PANArt logo, serial number, date of finalization, and signatures of the Hang makers were placed on Gu side of the Hang near the equator where the two shells meet.

In November of 2009 PANArt sent a letter to many who had requested a Hang indicating that there was a new development. The Free Integral Hang[8] was to be the offering moving forward. This new approach appears to abandon 12 TET and A440 for an intuitive tuning approach that works with all the sound generating surfaces to integrate a more holistic creation.[5]