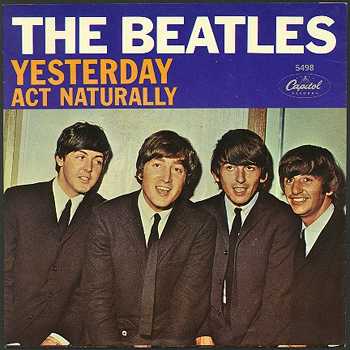 
"Yesterday" is a pop song originally recorded by for their 1965 album "Help!". According to the "", "Yesterday" has the most s of any song ever written. The song remains popular today with more than 3,000 recorded cover versions, the first hitting the United Kingdom top 10 three months after the release of "Help!". (BMI) asserts that it was performed over seven million times in the 20th century alone. The song was not released as a single in the UK at the time of the US release, and thus never gained number 1 single status in that country. However, "Yesterday" was voted the best song of the 20th century in a 1999 poll of music experts and listeners.

"Yesterday" takes the form of a melancholic acoustic about a break-up. It was the first official recording by The Beatles that relied upon a performance by a single member of the band — was accompanied solely by a . The final recording differed so greatly from other works by The Beatles that the other three members of the band vetoed the release of the song as a single in the United Kingdom. Although credited to "", the song was written solely by McCartney.

According to biographers of McCartney and The Beatles, McCartney composed the entire in a dream one night in his room at the Wimpole Street home of his then girlfriend and her family. Upon waking, he hurried to a , turned on a , and played the tune to avoid letting it slip into the recesses of his .

McCartney's initial concern was that he had subconsciously plagiarised someone else's work (known as ). As he put it, "For about a month I went round to people in the music business and asked them whether they had ever heard it before. Eventually it became like handing something in to the . I thought if no-one claimed it after a few weeks then I could have it."

Upon being convinced that he had not robbed anyone of his melody, McCartney began writing to suit it. As Lennon and McCartney were known to do at the time, a substitute working lyric, entitled "Scrambled Eggs", was used for the song until something more suitable was written. In his biography, "", McCartney recalled: "So first of all I checked this melody out, and people said to me, 'No, it's lovely, and I'm sure it's all yours.' It took me a little while to allow myself to claim it, but then like a prospector I finally staked my claim; stuck a little sign on it and said, 'Okay, it's mine!' It had no words. I used to call it 'Scrambled Eggs'."

During the shooting of "Help!", a piano was placed on one of the stages where filming was being conducted. McCartney would take advantage of this opportunity to perform "Scrambled Eggs" accompanied by the piano. , the director, was greatly annoyed by this, and eventually lost his temper, telling McCartney to finish writing the song, or he would have the piano removed. McCartney's original lyrics were, "Scrambled eggs, Oh, baby how I love your legs."

McCartney originally claimed he had written "Yesterday" during The Beatles' tour of France in 1964; however, the song was not released until the summer of 1965. During the intervening time, The Beatles released two albums, "" and "A Hard Day's Night", both of which could have included "Yesterday". Although McCartney has never elaborated his claims, it is likely that the reason for such a long delay, if it existed, was a disagreement between McCartney and regarding the song's arrangement, or, equally likely, the distaste of the other Beatles for the song.

Lennon later indicated that the song had been around for a while before:

McCartney said the breakthrough with the lyrics came during a trip to in May 1965:

On 27 May 1965, McCartney and Asher flew to for a holiday in , , and he borrowed an acoustic guitar from —whose house they were staying in—and completed the work on "Yesterday".

The song was offered as a demo to prior to The Beatles recording it, but he turned it down as he considered it "too soft." [, "Black Vinyl, White Powder", 100.]

Two days after returning home, the track was recorded at on the 14 June and 17 June 1965. There are conflicting accounts of how the song was recorded, the most quoted one being that McCartney recorded the song by himself, without bothering to involve the other band members.

Although McCartney had fallen in love with the song, he had a much harder time convincing the other members of the band that it was worthy of an album place, the main objection being that it did not fit in with their image, especially considering that "Yesterday" was extremely unlike other Beatles' songs at the time. This feeling was so strong that the other Beatles—Lennon, Harrison and —refused to permit the release of a single in the United Kingdom. This did not prevent from recording the first of many cover versions of "Yesterday" to come. His version made it into the top ten in the UK charts soon after its release in the autumn of 1965.

The Beatles' influence over their U.S. record label, Capitol, was not as strong as it was over 's in Britain. A single was released in the U.S., pairing "Yesterday" as the B-Side of "", a track which featured vocals by Ringo, the most popular Beatle in the States at that time. After the tremendous success of "Yesterday", the order in which the songs appeared on the sleeves was changed. The single was charting by 29 September 1965, and topped the charts for a full month, beginning on 9 October. The song spent a remarkable total of 11 weeks in the American charts, selling a million copies within five weeks. "Yesterday" was the most-played song on American radio for eight consecutive years, its popularity refusing to abate.

Meanwhile, in the UK, "Help!" debuted at number one on 14 August 1965 (the first album ever to do so), and continued to top the charts for nine weeks.

Ten years later on 8 March 1976, "Yesterday" was released by as a single in the UK, featuring "" on the B-side. Entering the charts on 13 March, the single stayed there for seven weeks, but it never rose higher than number 8. The release came about due to the expiration of The Beatles' contract with , Parlophone's parent. EMI released as many singles by The Beatles as they could on the same day, leading to 23 of them hitting the top 100 in the United Kingdom charts, including six in the top 50.

"Yesterday" has been recognized as the most recorded song in the history of popular music; its entry in the "Guinness Book of Records" suggests over 3000 different cover versions to date, by an eclectic mix of artists including , , , , , , , , , , and .

"Yesterday" won the for 'Outstanding Song of 1965', and came second for 'Most Performed Work of the Year', losing out to another McCartney composition, "Michelle". The song has received its fair share of acclaim in recent times as well, ranking 13th on ""'s 2004 list "".

"Yesterday," however, has also been criticised for being mundane and mawkish; had a marked dislike for the song, stating that "If you go into the , you can find a lot better than that. There are millions of songs like 'Michelle' and 'Yesterday' written in ". Ironically, Dylan ultimately recorded his own version of "Yesterday" four years later, but it was never released.

Shortly before his death in 1980, Lennon explained that he thought the lyrics didn't "resolve into any sense... They're good — but if you read the whole song, it doesn't say anything; you don't know what happened. She left and he wishes it were yesterday — that much you get — but it doesn't really resolve. ... Beautiful — and I never wished I'd written it."

The tonic key of the song is F major (although, since McCartney tuned his guitar down a whole step, he was playing the chords as if it were in G), where the song begins before veering off into the key of D minor. It is this frequent use of the minor, and the ii-V7 (Em and A7 chords in this case) leading into it, that gives the song its melancholy aura. The A7 chord is an example of a , specifically a V/vi chord. The G7 chord in the bridge is another secondary dominant, in this case a V/V chord, but rather than resolve it to the expected chord, as with the A7 to Dm in the verse, McCartney instead follows it with the IV chord, a Bb. This motion creates a descending line of C B Bb A to accompany the title lyric.

The string arrangement supplements the song's air of sadness, especially in the groaning melody and its [Cahill, Greg. "Encore: It Was 40 Years Ago Today - How the Beatles Launched a String-Playing Revolution", "Strings Go to Journal Record" 20:1:130 (June-July 2005). p. 162.] that connects the two halves of the bridge (on the line, "I don't know / she wouldn't say") as well as the descending line by the that segues the chorus back into the verses. This simple idea is so striking, McCartney mimics it with his vocal on the second pass of the chorus.

When the song was performed on "", it was done in the above-mentioned key of F, with McCartney as the only Beatle to perform, and the studio orchestra providing the string accompaniment. However, all of The Beatles played in a G-major version which was used in the Tokyo concerts during their 1966 tours.

When McCartney appeared on "", he stated that he owns the original lyrics to "Yesterday" written on the back of an .

In July 2003, British musicologists stumbled upon similarities between the lyric and rhyming schemes of "Yesterday" and 's "Answer Me", leading to speculation that McCartney had been influenced by the song. McCartney's publicists denied any resemblance between "Answer Me" and "Yesterday".

Ian Hammond speculated that McCartney subconsciously based "Yesterday" on ' version of "," but closed his article by saying that despite the similarities"Yesterday" is a "completely original and individual [work] ."

In 2006, Italian producer and songwriter Lilli Greco claimed "Yesterday" to be a cover of a 19th century Neapolitan song called Piccere' Che Vene a Dicere'. In the same article, Greco claimed that McCartney and Lennon had an "encyclopaedicknowledge" of world music and were particularly fond of Neapolitan songs.